Unseasonably warm temperatures and boisterous winds triggered evacuation orders in San Diego on Tuesday, where more than 700 acres have been torched by wildfires.

Authorities called for the evacuation of more than 20,000 homes in and around San Diego earlier in the day, but officials allowed many to return to their homes on Tuesday night as temperatures dropped in the area.

“We believe we have a pretty good handle on it,” said San Diego Fire Chief Javier Mainar. “We hope to do some more work through the night and into tomorrow, but I think the largest part of the emergency has passed.”

An extended period of drought in tandem with unusually high temperatures has left large swaths of the state’s landscape ripe for burning.

California officials have responded to more than 1,350 fires since the beginning of January, which is double the average number of blazes at this time of year. 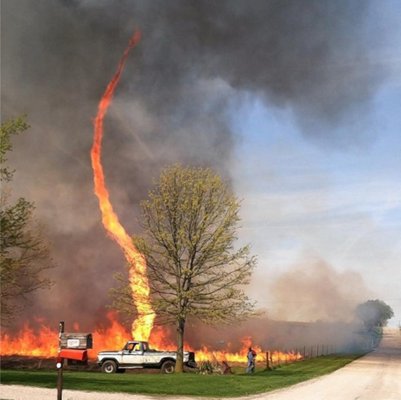 The Scariest Picture You'll See All Day: A 'Firenado'
Next Up: Editor's Pick