The U.S. Military: Sidelined by a Fatigued Nation

A Syrian man carries a boy's body from the site of an air strike reportedly by Bashar Assad's forces May 1 in Aleppo.
KHALED KHATIB / AFP / Getty Images
By Mark Thompson

In recent years, Syrian dictator Bashar al-Assad’s troops have brutalized their fellow citizens. They’d killed about 2,000 civilians when President Obama told him, nearly three years ago, that it was time for Assad to step down. Since then, Obama has drawn a “red line” against Syrian use of chemical weapons that Assad ignored—and another 150,000 have died. The U.S. military has stood on the sidelines.

In recent weeks, Russian President Vladimir Putin has unilaterally redrawn Europe’s post-World War II borders by snatching Crimea from Ukraine. Since that deft move, he has acted as a Slavic Geppetto in eastern Ukraine, sowing enough discord in the former Soviet state to keep it off balance, unable to puncture Moscow’s sphere of influence. Beyond dispatching small, tripwire forces to nearby NATO nations, the U.S. military has remained at parade rest.

In recent days, the world has watched in horror as the Nigerian terror group Boko Haram kidnapped more than 250 schoolgirls and threatened to sell them into slavery. The U.S. military has discreetly sent aircraft over Nigeria, and dispatched 16 troops to the country, to try to find the girls.

Is this the best the world’s lone superpower can do?

It’s a topic that’s being debated in Washington and Brussels, as well as Moscow and Beijing. But unlike some countries, under some leaders, at some times, the U.S. public wants no part of such foreign fights—which is why the U.S. military remains steadfastly on the sidelines amid such turmoil.

It’s perfectly normal to want to do something for those innocents caught up in war, or terror. After all, the U.S. spends more money on its military than the next eight biggest spenders combined. While it doesn’t like being called “the world’s policeman,” it is the only nation whose global military reach lets it wear that uniform.

Over at The Economist, Oxbridge chin-strokers are asking “What would America fight for?” They conclude the U.S. public has decided that “innocent American blood and good American treasure should not be wasted on this ungrateful jungle full of thugs”—especially as Europe continues to stint on its military forces.

The public pendulum for military wrath peaked in the days following 9/11 and the resulting invasion of Afghanistan. It was already headed in the other direction when President George W. Bush ordered the Pentagon into Iraq less than two years later on trumped-up claims that Saddam Hussein possessed weapons of mass destruction. A pair of inconclusive wars the Pentagon expected to be short and cheap ended up costing the nation some $2 trillion and 6,800 of its troops’ lives. They now act as a brake on future conflicts, and will for some years to come. Nearly six in 10 Americans would oppose the use of U.S. military action in Ukraine if economic sanctions failed to deter Russia, a recent CNN poll showed.

Obama has brandished what he called the “disastrous decision to go into Iraq” as a sword to try to cut down those critical of his skepticism toward armed conflict. “Typically, criticism of our foreign policy has been directed at the failure to use military force,” he said in the Philippines last month. “Why is it that everybody is so eager to use military force after we’ve just gone through a decade of war at enormous costs to our troops and to our budget?” The President said those arguing for U.S. military force “would go headlong into a bunch of military adventures that the American people had no interest in participating in, and would not advance our core security interests.”

Those who work for the commander-in-chief have followed his lead. “As I look forward and think about the need to rebalance the use of military power, I think we will need less direct action because it is the most costly, disruptive and controversial use of American power,” Army General Martin Dempsey, chairman of the Joint Chiefs of Staff, told Defense One in an interview published Tuesday. “By contrast, we need to do more in terms of building partners. I’m a huge advocate of doubling or even tripling our effort to build credible partners around the globe. And I’m also a huge advocate of enabling others who have the will, but perhaps not the capability to act.” What Dempsey calls “direct action” becomes more challenging under Pentagon plans to cut nearly 30,000 soldiers from the Army over the next 17 months.

Matthew Barzun, the U.S. ambassador to Britain, said late last week that the economic sanctions the U.S. and its allies are tightening against Russia for its dismembering of Ukrainian constitute a “21st Century use of force.” Those who belittle such non-kinetic action don’t realize, he added, that there is a middle ground “between hand grenades or hand-wringing.”

The respite from combat should give the U.S. military time to figure out how to do better the next time. But, just as it shunned counter-insurgency following Vietnam, the Pentagon is focusing anew on honing its blade for the rare kind of war it prefers to fight, rather than the real world’s messy battles. The Pentagon’s weapons-builders, for example, are warning that the new national-security challenges facing the nation include “cyber operations, advanced electronic warfare, proliferation of ballistic missiles for both strategic and tactical intent, contested space, and networked integrated air defenses.”

Last month the Air Force’s 509th Bomb Wing flew the nation’s entire fleet of 20 B-2 stealth bombers a record 142 sorties totaling 839 hours. It achieved the benchmark because B-2 maintainers boosted the planes’ mission-capable rate from the normal 55% to nearly 70% (the radar-eluding skin on each $2 billion plane is so delicate that only about 10 of the 20 planes, designed to attack the Soviet Union in World War III, are ready to fly at any one time). “Any bad guy in the world watching us over the last 30 days saw a whole lot of airplanes doing a whole lot of flying,” Colonel Chase McCown, the 509th’s maintenance chief, told his public-affairs officer. “That’s a strong message in itself.” 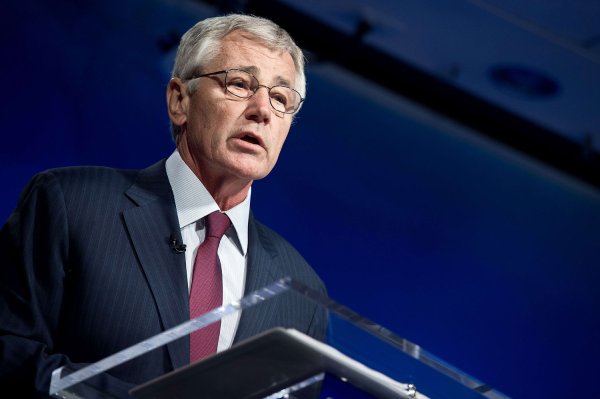 Hagel Mulls Review of Ban on Transgender Troops
Next Up: Editor's Pick