Being a renegade can be a lot of fun—but it isn’t cheap. That was the message of T-Mobile’s recent quarterly earnings report. The company, which bills itself as the “un-carrier” for policies which run counter to industry habits, spent the last year lobbing grenades at AT&T and Verizon Wireless while CEO John Legere gleefully badmouthed the pair as duopolist dorks whose days of easy money were over.

He’s gone after their business like a starving man in search of a meal: T-Mobile added 4.4 million net customers last year. Compare that with 2012, when the company lost customers. “2013 was a transformational year for us, as we turned a declining business into a growth one,” crowed Legere.

How did he get all those new customers? He paid for them. In its last quarter, T-Mobile’s revenues rose 39% to $6.83 billion while generating a loss of $20 million. The losses come from the fact that T-Mobile is offering to pick up the tab when consumers break their service contracts with competitors. The company also reported that its ARPU—average revenue per unit, a key industry metric—declined by 2.9%. Normally that would be an alarming figure. But it’s consistent with the fact that T-Mobile customers are switching to the everyday low price plan that T-Mobile has used to break the hold of the bundled services approach of AT&T and Verizon. That strategy is hardly new but it can be effective: attract more customers at a lower price and live off the higher volume.

So far the T-Mob is for real. Any company can buy customers from a rival by lowering the price. But for the most part, you’re just renting them until the same rivals match or beat your price and then the new customers go away. That doesn’t seem to be the case here. The carrier’s “churn,” meaning the number of customers it lost, dropped to 1.7% from 2.5%. The company is also reporting that it is getting customers with higher credit ratings, which usually translates to lower losses from bad accounts. “Better customers are coming to T-Mobile and they are staying longer,” says Legere.

The T-Mob has broken the bonds that keep consumers tied to their phone or cable carriers. Those are known as switching costs. And in the phone industry, the switching cost isn’t just money, but it also be the pain of getting the whole family out if you’re on a family plan, for instance. T-Mob has made the switch painless—but it is yet to make it profitable.

Legere has no plans to ease up and if T-Mobile continues to rack up new customers at its current rate the profits will eventually roll in. The company expects to sign 2-to-3 million net new customers to service contracts this year—meaning that it expects to snatch them away from competitors since nearly everyone who wants a phone has one. If you are Verizon, and just floated a $49 billion bond offering to complete the $130 billion buyout of wireless partner Vodofone, the last thing you need is Legere short-circuiting your pricing structure. If you are a consumer, the cellphone industry has finally become a fun place to be. 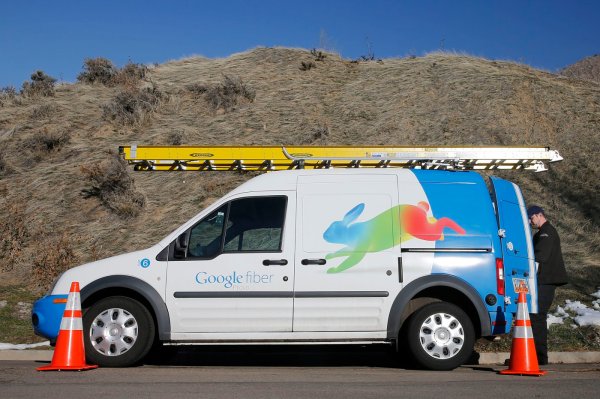 The Surprising Best Thing about Google Fiber Coming to Your Town
Next Up: Editor's Pick