Lau was attacked in his usual breakfast haunt in the territory’s Sai Wan Ho neighborhood. His assailant left on a motorbike driven by a second man. Police have organized roadblocks and are combing the area.

“Police told me that he suffered three knife wounds in the back and leg,” Lau’s wife, Vivien Chan, told the South China Morning Post by phone. Hospital reports indicate that his lung may have been damaged during the attack.

Lau’s ousting last month sparked protests over perceived diminishing press freedom in the semiautonomous Chinese territory, and although no explicit link has been made, speculation is rife that the attack was somehow connected.

On Wednesday, the Hong Kong Journalists Association (HKJA) released a statement that urged the authorities to pursue “those malignant forces behind” whoever wielded the knife.

“I have known Kevin since the ’80s, and knowing his family background and his character, I simply cannot think of any personal reason why anyone would want to attack him, not to mention try to kill him,” HKJA chairperson Sham Yee-lan tells TIME.

Hong Kong Chief Executive Leung Chun-ying said in a statement that he and his entire Administration “feel indignant” and vowed to search out those responsible. “Hong Kong is a society of the rule of law, and we are absolutely intolerant about violence of this kind,” he said.

Lau was replaced as chief editor of Ming Pao, consistently one of Hong Kong’s most trusted newspapers, by Malaysian journalist Chong Tien Siong in January, prompting a furious response from staff. (Lau was handed a new post within the group’s electronic-books-and-teaching-materials division.)

Many local journalists claimed that Lau’s removal was punishment for pursuing corruption and human-rights stories deemed embarrassing to Beijing. On Jan. 20, more than 100 Ming Pao staff stood outside their offices dressed in black and observed a five-and-half minute period of silence in protest. In addition, four senior writers submitted blank columns that day, while 90% of the 270-strong editorial department signed a petition demanding an explanation. Ming Pao is owned by Malaysian tycoon Tiong Hiew King, who has business interests in China.

The case was seized upon by many in the media as an indication of perceived encroachment by Beijing in Hong Kong’s vibrant media sphere. Despite the 1997 transformation from British colony into China’s Special Administrative Region, the city has maintained a high degree of autonomy and enjoys markedly less censorship than the mainland.

This, critics say, has been on the wane in recent years. On Sunday, around 2,000 journalists and supporters marched through central Hong Kong to highlight a creeping culture of self-censorship, where big Chinese business exerts an inordinate influence on editorial policy.

Reporters Without Borders ranked Hong Kong 61st in the world for press freedom in 2014, down from 18th place when the survey was first complied in 2002.

(MORE: On the Streets of Hong Kong, a Vast Display of Discontent)

“Incidents of physical violence have increased,” says Sham, “and at the same time the invisible violence is also happening.”

Despite enjoying remarkable low crime rates, Hong Kong has an incongruous history of attacks on outspoken media figures. On June 30, three masked men threatened distribution workers for the Chinese-language Apple Daily newspaper with knives, before burning 26,000 copies. Jimmy Lai, the millionaire owner of Next Media Group, which publishes the tabloid, is renowned for often vitriolic criticism of China. A few days earlier, a stolen car was driven into the front gate at Lai’s home, and then an ax and machete were placed outside of the group’s headquarters.

Most infamously, back in 1998, radio host Albert Cheng suffered deep slashes on his arms, back and right leg that required six hours of surgery after he was set upon by unknown assailants. Cheng’s then radio show, Teacup in a Tempest, was the most listened-to morning program in Hong Kong at the time, and frequently took aim at Beijing.

Earlier this month, a talk-show host often critical of the Hong Kong and Chinese governments, Li Wei-ling, was sacked from her job at Commercial Radio. In a recent statement made before the attack on Lau, the Brussels-based International Federation of Journalists expressed concern over “the frequency and pattern of media incidents that range from physical attacks and death threats though to attempts to influence media independence by economic forces and direct political interference.”

Lau was a “moderate who was not an extremely outspoken critical type of journalist,” says Joseph Cheng, chair of political science at Hong Kong’s City University. “Despite the internal row in Ming Pao, he kept a very low profile and decided to stay in the company.”

As Lau fights for his life, a city wonders when the printed word became such a high-stakes game. 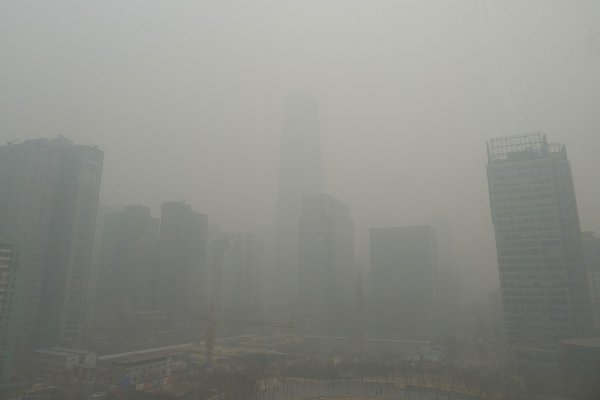 China's Smog Is So Bad They're Now Calling It a 'Nuclear Winter'
Next Up: Editor's Pick