Good morning, Beijing: The view from Beech's 16th-floor apartment on Feb. 26 in Beijing's Central Business District. The building in the background is the tallest in the city
Hannah Beech
By Hannah Beech

On Wednesday morning in Beijing, we fitted our two boys with their mini-masks and sent them off to school. Air pollution, according to the U.S. embassy index, had hit a dangerous particulate concentration of 497. (The World Health Organization warns against daily exposure to PM2.5 fine particulates above 25.) At 500 on the Beijing scale—which the U.S. embassy has dryly dubbed “beyond index” because who would think air pollution could climb so high?—school would be shuttered. Three index points were all that were keeping our kids in class.

By the time our children, ages 6 and 4, were starting school, the U.S. air-quality index had hit 512. By 11:00 am, it had reached 537. The air is off-the-charts bad. The U.S. embassy cautions that at this level, “everyone may experience more serious health effects.” Even the Chinese government, whose own air-quality monitoring often records pollution at a lower intensity than the American embassy does, recommends that residents should wear masks and avoid outdoor activities.

As the foul air intensified over the weekend, the nation’s senior climate-change official noted that “China’s pollution is at an unbearable stage.” Another scientist compared the smog blanket to living through a “nuclear winter” because the air is so impenetrable that crops are not getting enough light and becoming stunted, threatening disaster for many farmers.

As the air pollution has worsened over the last couple years, local awareness has spiked, in part because state media are now allowed to report on the smog. People who used to complain to me about the “weather” now acknowledge a human hand in the acrid air. Locals are demanding their government do something; a slew of new anti-pollution measures have been unveiled but to little apparent effect so far. One man in the notoriously smoggy northern city of Shijiazhuang is trying to sue the city government for not adequately tackling the foul air, according to the Yanzhao Evening News, a local paper. He is believed to be the first person to launch such a lawsuit.

Meanwhile, on Feb. 25, China’s President Xi Jinping left the climate-controlled confines of China’s leadership compound for a stroll through Beijing’s historic alleyways. The walkabout was unexpected, although Xi had taken another surprise tour of the capital two months before. Contrary to his government’s own advice on the toxic air, the Chinese leader did not wear a mask. 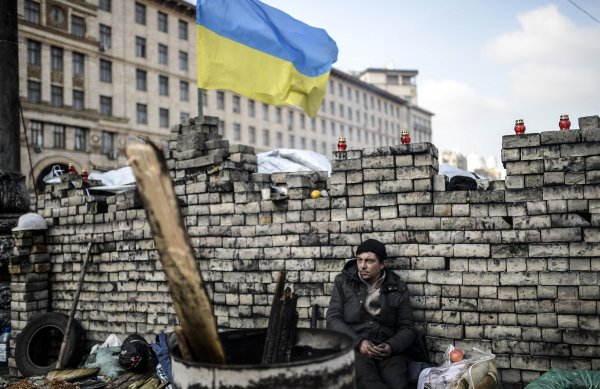 No, Russia Will Not Intervene in Ukraine
Next Up: Editor's Pick