What Is MERS? Here's What You Need To Know

The CDC confirmed last week that there was a second case of Middle East Respiratory Syndrome (MERS) in the U.S.. [Update: And today, a third case was confirmed in Illinois. The patient was someone in contact with the first U.S. MERS patient.] You may be wondering what the hoopla is about if there are only three cases in the U.S. Let me tell you.

What is MERS?
MERS is a respiratory disease that is caused by the Middle East Respiratory Syndrome Coronavirus” (MERS-CoV). MERS is in the same family of viruses as SARS and the common cold, but it appears so far to be less transmissible. The virus first appeared in Saudi Arabia in 2012 and to date, there are over 500 lab-confirmed cases of the disease worldwide and more than 145 people have died. The virus has spread to other countries in the Arabian Peninsula, and it’s thought to have originated from camels.

What are the symptoms?
Shortness of breath, fever, and coughing. In some cases it can be fatal, with 30% of people contracting the disease dying, but the first U.S. patient in Indiana has fully recovered and is discharged from the hospital. How severe a case is likely depends on the initial health of the person who contracts it.

How did the virus get to the United States?
In both cases, the virus was imported into the United States by people living in Saudi Arabia who work in health care settings. The second patient in Florida flew from Jeddah to London, and then Boston. From there, the patient traveled to Atlanta and then Orlando. During travel, the patient and started feeling symptoms. When the patient arrived at the emergency room of a Florida hospital on May 8, they were put into isolation, and the patient is currently in stable condition. The CDC has frequently said that cases of MERS in the U.S. have been expected, so the arrival is not a surprise. The third case, as mentioned, was someone in contact with the first U.S. MERS patient, in Illinois. 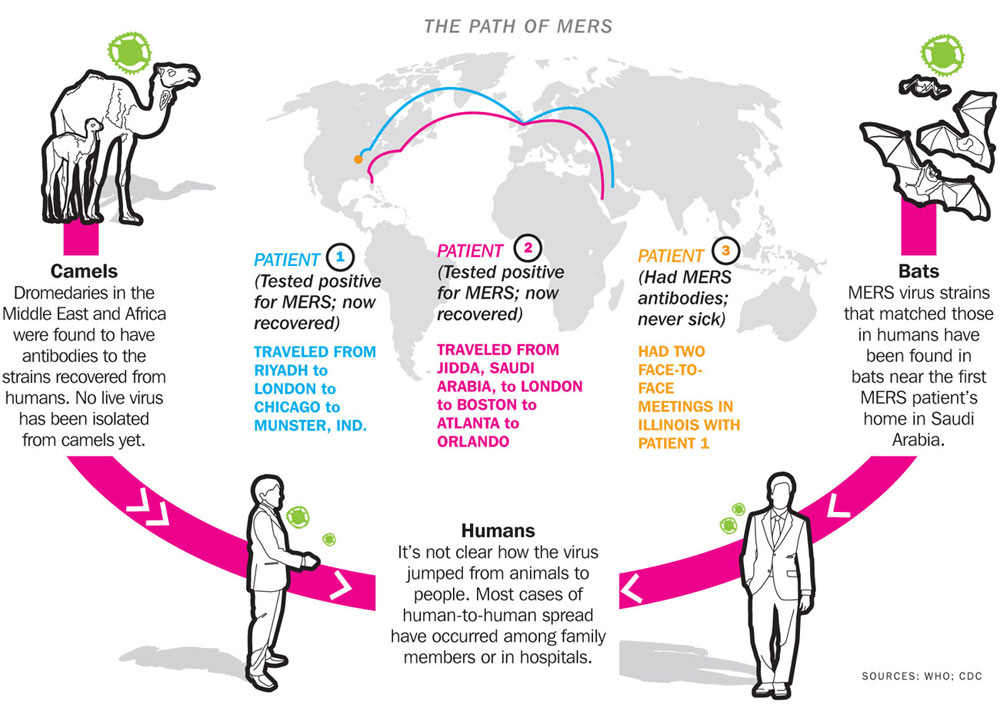 How is the virus transmitted?
What we know about the virus is that human transmission appears to only occur when someone has direct contact with an infected person. That could mean treating a patient in their home or in a hospital setting. Still, the health care workers in Indiana who interacted with the MERS patient have twice tested negative for the virus.

Am I at risk?
The CDC says the risk for Americans is extremely low. The CDC released a travel alert for the Arabian Peninsula, reminding travelers to pay attention to their health before and after their trip. However, health care workers serving in the Middle East are recommended to take necessary precautions to protect themselves from infection. The CDC currently has a team in Indiana and Florida to monitor the infection, as well as a team in Saudi Arabia studying the disease.

But what if I recently traveled to the Arabian Peninsula? How do I know if I’m infected?
The incubation period for the disease is around five to 14 days. If within 14 days after traveling to these countries you experience symptoms of respiratory illness, you can check with your health care provider and explain your recent travel. But again, so far the disease appears to transmit when someone has direct contact with an infected person, usually caring for that person.

Is there going to be an outbreak in the U.S. soon?
Infectious disease experts don’t appear to think so. Take SARS as a model: the disease started in Southern China in the early 2000s resulted in over 8,000 cases and 774 deaths. But only eight cases made it to the United States, and none of those patients died from the disease. MERS is less virulent than SARS, and the spread of SARS was aided by the existence of “superspreaders” who were people who spread the virus in much more excessive amounts than others, according to Dr. Amesh Adalja, an infectious disease physician with the University of Pittsburgh Medical Center who specializes in pandemic policy. There are currently no MERS superspreaders. “This disease doesn’t spread efficiently. It’s hostile, but it seems casual contacts have not been becoming ill,” says Dr. Adalja.

So, I don’t need to freak out right now?
Take a deep breath. The fact that there are three cases of MERS in the United States is more of a message to health care workers. If a patient comes in complaining of severe respiratory symptoms, it’s a good idea to ask them where they’ve traveled. As for the rest of us, the usual hygiene rules come into play. The CDC recommends the following:

Deadly Virus Appears in Florida
Next Up: Editor's Pick