Hey, Smith Students: It's Hard To Hear With Your Fingers in Your Ears

The weeks before graduation are usually packed with last-minute hookups and existential crises, but Smith College students somehow found time to alienate a world leader. Campus “activists” started a petition protesting Christine Lagarde’s selection as this year’s commencement speaker, calling her a “corrupt imperialist” for failing to end global poverty. Lagarde cancelled her speech, because she’s got better things to do than speak to a bunch of self-righteous millennials who don’t want her there. What are these students thinking? Don’t they know that Christine Lagarde is the Beyonce of world economists?

The problem, of course, isn’t just at Smith. A few weeks ago, former Secretary of State Condoleezza Rice cancelled her speech at Rutgers amid student protests over her work with the Bush Administration. Last month Brandeis University said it would not award scholar Ayaan Hirsi Ali with an honorary degree because of student protests that she called Islam a “a destructive, nihilistic cult of death.” And just yesterday, former UC Berkeley Chancellor Robert J. Bergenau withdrew from speaking at Haverford because students objected to the fact that campus police used batons to break up a 2011 Occupy protest while he was in charge.

What’s happening with these commencement speakers isn’t activism; it’s reactivism. It’s spoiled to think that any of us are entitled to a world where we never encounter someone with whom we disagree. Besides, what do students think they’ll achieve? It’s a foolish gesture that says more about how students think of their own activism than anything else.

Students have been protesting ever since Marius and his bros stormed the barricades in Les Miserables. Kids demonstrated all through the 20th century for important things like civil rights, an end to the Vietnam War, and fair pay for campus workers. More than 150 students walked out of Columbia’s 1985 Commencement to pressure the University to divest $32.5 million from South African investments because of apartheid.

But protesting Christine Lagarde’s speech is not the same as organizing to fight global poverty. Whining about Condoleezza Rice doesn’t change anything about the US’s policy on torture. And un-inviting Ayaan Hirsi Ali doesn’t help advance religious tolerance.

It’s a self-serving kind of political correctness that’s annoyingly “correct” yet totally apolitical in that it achieves no substantial change. Do they think they are “punishing” Christine Lagarde for IMF policy before she took the helm? Do they think she is lying on her therapist’s couch, saying “What can I do to make those Smith girls like me? Maybe I should rethink the IMF’s policy in the Global South? Is it Greece?”

This is faux activism — more about the activist than about the world they hope to change. Squabbling over a commencement speaker is an easy fight, and its only purpose is to make students feel radical. They get puffed up by their own offendedness and mistake hypersensitivity for militancy. They think they’ve made a point, but all they’ve done is deny themselves the opportunity to learn from some of the smartest women in the world.

Besides, online petitions are even more toothless than hashtag activism. Critics say movements like #BringBackOurGirls offer trivial social media solutions to real world problems, but at least they spread the word and generate real dialogue. Online petitions like the ones protesting Lagarde’s speech, on the other hand, just stir up outrage within small, easily manipulated communities. They allow kids to feel important without the responsibility of changing anything. Clicking “sign” on an online petition does not make you a crusader for truth and justice.

And Smith’s protest is especially embarrassing because Lagarde herself would be such an amazing speaker. Students who are concerned about global poverty could learn a thing or two from the woman who holds the world’s purse strings. But this is typical of the hands-over-ears kind of tantrums that we’ve come to expect from women’s colleges, which seem to be the perfect incubator for ridiculous grievances.

If anything, these kinds of tantrums make students less effective at solving real-world problems, because they’re blinded by their own idealism. It’s hard to get anything done when you make the perfect the enemy of the good. No commencement speaker could ever be perfect. But Christine Lagarde would have been pretty damn good. 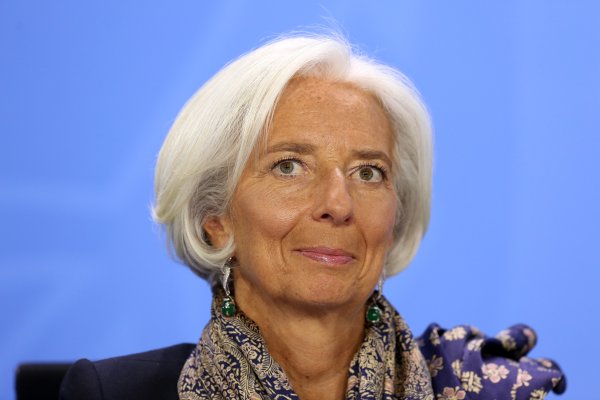 Caving on Commencement Speakers Is Censorship, Not Scholarship
Next Up: Editor's Pick