Inside The Obama Administration Fight Over The Drone Memo

Demonstrators deploy a model of a U.S. drone aircraft at the "Stop Watching Us: A Rally Against Mass Surveillance" near the U.S. Capitol in Washington, Oct. 26, 2013
Jonathan Ernst—Reuters
By Zeke J Miller and Massimo Calabresi

Under pressure from liberals and libertarians that threatens to sink a judicial nomination, the Obama Administration is moving closer to releasing a classified legal justification for the use of drone strikes against Americans fighting for al-Qaeda, Administration officials tell TIME.

David Barron, who previously worked at the Office of Legal Counsel at the Justice Department, has seen his nomination to the U.S. Court of Appeals for the First Circuit stalled by an alliance of liberals like Democratic Sen. Mark Udall ­and libertarian Republican Sen. Rand Paul. Barron was the principal author of at least one memo that provided the legal basis for the extrajudicial killing of Anwar al-Awlaki, an American citizen and senior figure in the terrorist group al-Qaeda in the Arabian Peninsula.

Last month, the Second Circuit Court of Appeals ruled that the Barron memo must be made public in response to lawsuits filed by the New York Times and the American Civil Liberties Union. Under court rules, the Obama Administration was given 60 days to decide whether to appeal the ruling or release the document, a deadline that has sparked a vigorous debate inside the Administration.

The U.S. intelligence community and the Office of the Director of National Intelligence want the Administration not to release the memo. Also against release is the Office of Legal Counsel, which serves as the in-house legal expert on executive branch powers and which vigorously guards its opinions.

On the other side are Administration liberals, who make the case for releasing the document on the basis of increased transparency. They also argue that last year’s release of a Justice Department report outlining the reasoning for the formal justification makes its continued classification irrelevant.

“Whatever protection the legal analysis might once have had has been lost by virtue of public statements of public officials at the highest levels and official disclosure of the DOJ White Paper,” Judge Jon Newman wrote in the Second Circuit’s opinion, referring to the Justice Department report on the legal rationale for the administration’s drone policy.

The Solicitor General will nominally make the decision whether to ask the full bench of the appeals court or the Supreme Court to hear the case. But the White House is involved because Barron’s nomination may hang in the balance, and because other agencies, like the CIA, feel strongly about the issue. Last week the administration made the memo available to all senators in one of the Senate’s Sensitive Compartmented Information Facilities in the Capitol.

“The Administration has made available unredacted copies of all written legal advice issued by Mr. Barron regarding the potential use of lethal force against U.S. citizens in counterterrorism operations,” White House spokesman Eric Schultz said.

But several lawmakers, including Paul, are demanding that a redacted version of the memo be made public, as ordered by the appellate court, before a vote on the nomination.

“The decision to provide, at least to the full Senate, the drone memo is an indication of some folks in the administration leaning in favor of transparency,” said an Administration official familiar with the internal debate.

The debate whether to release the memo is a familiar one for President Barack Obama. In the opening months of his presidency, he faced the decision whether to release the legal justification memos for Bush-era enhanced interrogation techniques—the so-called “torture memos.” Obama’s intelligence team opposed releasing the memos, while liberals pushed for transparency. In a sign of the shifting political climate surrounding the fight against terrorists, the President’s political advisors opposed the earlier memos’ release, but now support making the drone memos public.

For Obama, who has proclaimed his to be the “most transparent administration ever,” the politics around the memo are fraught with pitfalls. If the President, a constitutional lawyer by training, decides to withhold the memo, it will be used a political cudgel by opponents of his drone policy, and it could all be for naught if the opinion is upheld. If he releases it, he will face criticism from some in his administration and from national security hawks.

Paul, a Kentucky Republican eyeing the White House in 2016, has used the drone issue as a way to bolster his political fortunes. He filibustered the nomination of CIA Director John Brennan last year over the Administration’s initial unwillingness to rule out drone strikes on American soil. 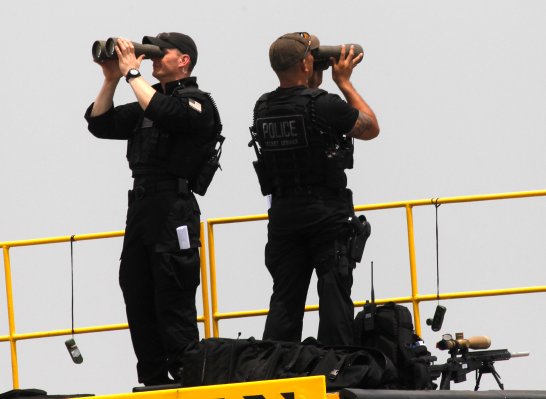 If This Is an Emergency, Press 1
Next Up: Editor's Pick