AT&T, the deep-pocketed national telecom giant watching policymakers gnash teeth about the proposed $42-billion merger between Comcast and Time Warner Cable, is close to sealing the deal on a big corporate marriage of its own. It’s soon-to-be partner, according to multiple reports Monday: satellite giant DirectTV

The proposed $50-billion merger between the two tech titans—which would be the largest telecom deal in years—is not unexpected, but multiple reports indicate a deal is closer than ever, perhaps just weeks away. AT&T and DirecTV are aiming to reshape the TV business at a time of rapid change in the industry. The deal would be another example of the decades-long consolidation of the telecom and cable industries.

The Wall Street Journal, citing unnamed sources familiar with the matter, reports the two companies are discussing a deal that would involve a mix of cash and AT&T stock. Executives hope to hammer out an agreement in the next few weeks. DirecTV shares shot up nearly 6% in early trading Tuesday on the deal talk.

DirecTV has the second largest pay-TV subscriber base in the country but lacks a competitive broadband-Internet offering of its own. AT&T is moving ahead with its own broadband plans, but DirecTV’s satellite-TV business would be a major prize. AT&T, which is currently worth $185 billion, can definitely afford the deal.

A combined AT&T-DirecTV would hold a vast swath of wireless spectrum—the public radio signals that make smartphones and tablets work—and would also be better positioned to compete against Comcast, the industry Goliath.

U.S. broadband leader Comcast is currently trying to persuade regulators to let it buy Time Warner Cable in a $42 billion deal. That review will extend into next year, as would a review of a AT&T-DirecTV merger. Comcast’s proposed merger with Time Warner Cable, its smaller rival, already faces intense scrutiny from the Justice Department over competition concerns, not to mention the Federal Communications Commission (FCC), which must ensure the deal advances the public interest. An AT&T merger with DirecTV would face equally intense scrutiny.

If AT&T and DirecTV join forces, the deal could complicate the review of Comcast’s bid for Time Warner Cable, because antitrust regulators might want to consider both deals simultaneously, the New York Times reports. That might throw a screwball into the notoriously understaffed FCC office.

The Times also suggests the deal might be a strategic move to rattle Dish honcho Charlie Ergen, the legendary media operator who is also on the prowl for acquisitions. Industry watchers have been speculating about a Dish-DirecTV merger for years, but most analysts believe U.S. antitrust regulators would not allow the nation’s two largest satellite-TV firms to become one company.

AT&T also appears to be taking advantage of the simmering furor about “Net neutrality“—the principle that all Internet users should have open access to the Internet—as well as the Comcast–Time Warner deal, to float a $50 billion deal of its own. 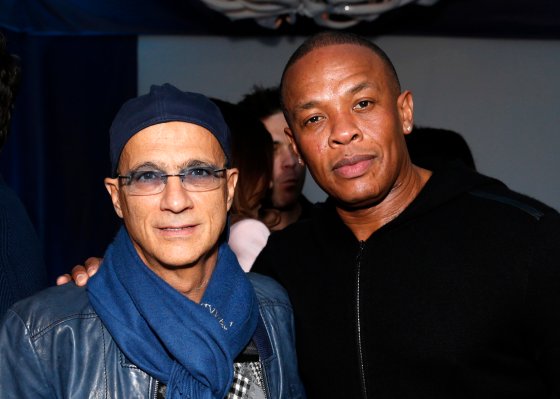 Apple Reportedly in Talks to Buy Beats for $3.2 Billion
Next Up: Editor's Pick