Mario Kart 8 Review: Just What the Wii U Ordered

Scooting down a neon-gobsmacked raceway in Mario Kart 8, I snake left, then right, then left again, chaining mini-turbos and rocketing past visually thumping loudspeakers, pulsing purplish stars and a tower-sized EQ that throbs in time with the soundtrack’s symphony of techno. Everything’s moving and alive and lit up like one long, continuous Jumbotron. And then I’m gliding over lacquered blackness, my just-upturned anti-grav wheels flying inches above what looks like grooved vinyl, the music flanging, the track ahead twisting and looping back at me — above me — like a disco Möbius strip.

Imagine a carnival of race tropes, a grab bag of driver profiles, tactics and race types, a melange of little gameplay iterations and configuration tweaks and “Holy crap, I’m racing up and down that?” moments jammed into a single game. To sum up my affection for this best of all Nintendo’s Mario Karts to date in a few words: lavish, kaleidoscopic, gasp-inducing, ingenious, exotic, balletic and — let’s switch from words to statements — something I’ll be playing for a long, long time.

Not because the basic kart racing’s been rejiggered in some wondrous new Nintendo-fied way. It hasn’t. Think of it more like a 22-year-old snowball that’s still snowballing, a slightly bigger smorgasbord of soothing cartoon-scape tracks and fanciful kart types, a collage of all-terrain vehicles (including actual ATVs this time, enlarging racer metrics like speed, acceleration and handling), some new objects to toss (the cleverest: the piranha plant that snaps up items, coins and other racers and the three-use boomerang flower that does damage outgoing and incoming), upside-down anti-grav racing (though since the screen shifts to maintain perspective, it doesn’t feel like upside-down racing), more karts and kart parts and unlockables and so forth. And then Nintendo whops you upside both retinas with some of the most sublime visuals ever seen in or out of a Nintendo game.

The ballyhooed new mechanic — antigravity racing, your wheels automatically flipping perpendicular to the ground, like Doc Brown’s DeLorean during Back to the Future‘s coda — makes the new every-which-way (including upside-down and backwards) tracks feel cooler to course through, but that’s about it unless you’re playing cooperatively.

The novelty here’s that instead of avoiding drivers, you’re encouraged to ram them, which causes both vehicles to turbo off in different directions. But it’s too happenstance as a solo tactic, other drivers slamming into you from behind unexpectedly, or sliding away at the last minute and wrecking your angle of attack. Team up with another player, by contrast, and it becomes an indispensable tactic, the two of you slamming into one another willfully, rocketing down the course like a yo-yoing centrifuge.

The series’ signature element of chance remains: the most skilled players in the world can still wind up losing an otherwise expertly played race thanks to another player’s inopportunely dispatched blue shell. And as usual, finding the fastest path through a course (and figuring out how to maximize drifting through it) is at least half of winning. You can hone your skills learning from the best players by using returning features like Ghost mode (in Time Trials), uploading your own performances as you like. And though I wasn’t able to test it (it’s not working yet), the game now supports (modest) editing and uploading of video clips to YouTube, a move that only brings it up to par with its rivals, but warrants an attaboy nonetheless.

You can’t talk about Mario Kart 8, the most important game Nintendo’s yet released for its flagship console, without thinking about the troubled state of the Wii U. Mario Kart 8 alone won’t save the Wii U, if indeed the Wii U needs saving. That’s the implicit question, the kart-riding elephant in all the game’s glittering stadiums, water parks, shoals, harbors, mansions and electrodromes. No single game has the power to make (or, for that matter, break) something as multivalent as a platform. Mario Kart 8 is wonderful, thank goodness, but it’s still just one game.

Nor does the racer best emblematize what the Wii U stands for: playing games with a tablet that’s not a tablet, juggling input from disjunct screens that aren’t supposed to feel disjunct (and they definitely seem at odds here — I rarely felt comfortable enough to look down). Sure, the Wii U GamePad offers sometimes-complimentary feedback, but nothing about its stack of command center feeds tracking racer positions or letting you enable motion control steering on the fly feel essential, much less exude halcyon-days-Wii novelty.

Put it this way: if you have a Wii U, it’s the proverbial no-brainer for any sort of player, casual to pro. If you don’t own a Wii U, here’s a reason to buy one, with the caveat that the Wii U’s software future looks pretty hazy right now. Nintendo’s deluxe 32GB Wii U bundled with Mario Kart 8 runs $330, knocking $30 off the standalone price for the racer, so there’s that, but it’s still $330 for one game (plus a driving wheel and Wii Remote) and a platform with an uncertain future. But it’s also one of the best games Nintendo’s delivered, and a reminder that when the company’s firing on all cylinders — even when it’s standing on its own shoulders, gameplay-wise — its creative output remains peerless. 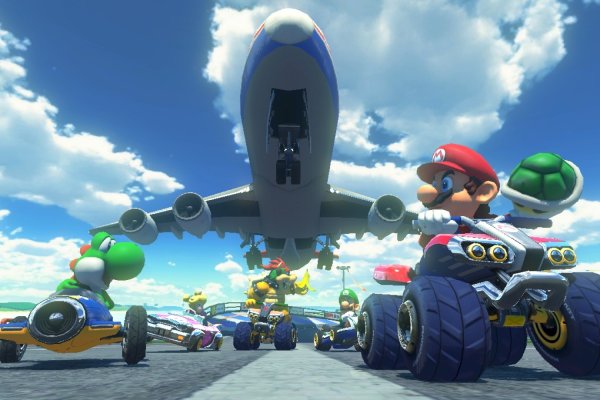 Nintendo Can't Save the Wii U
Next Up: Editor's Pick