The NBA might want to ditch the red tape and put a rush order on its “make Donald Sterling go away” vote. (Does today work for everyone?)

In an interview with CNN’s Anderson Cooper Monday night, Sterling did the unthinkable – actually, knowing his history, we probably could have seen the train wreck coming. Though he claimed that he wasn’t a racist, and though he begged for everyone’s forgiveness, he actually made more racist remarks during his conversation with Cooper.

While trashing Magic Johnson for contracting the HIV over twenty years ago, Sterling made the following observation, among others: “That’s one problem I have. Jews, when they get successful, they will help their people — and some of the African-Americans, maybe I’ll get in trouble again, they don’t want to help anybody.”

Jews are generous. Blacks aren’t. That’s stereotyping 101. To be fair, Sterling said “some” African-Americans don’t give back. But it’s a paltry sort of qualifier. His insinuations could not be clearer.

Then, there was the Magic rant. If Sterling is trying to win over fellow owners so he can keep his stake in the Clippers, a bizarre, ignorant trashing of an NBA legend is probably not the best way to go about it.

Magic Johnson isn’t a saint. He’d be the first person to tell you that. After contracting HIV in 1991, Johnson was open and honest about his mistakes. He had unprotected sex with many women, and barnstormed the country telling young people to avoid the mistakes he made. President George H.W. Bush appointed him to the National Commission on AIDS, and Johnson later resigned in protest, because he thought the administration wasn’t truly committed to fighting the disease.

Over the years, could Johnson have done more to support HIV/AIDS awareness and research? Some activists have said so. But Johnson has made a sincere effort, and his foundation continues to fund HIV prevention and education programs. The Magic Johnson Foundation also provides scholarships for low-income students, and, according to its website, has opened Community Empowerment Centers in 16 cities across the country, including New Orleans, Oakland, Chicago, and New York City. His inner-city movie theaters have created jobs for African-Americans.

But this is Sterling on Johnson: “Well what kind of guy goes to every city, has sex with every girl, then he catches HIV, is that someone we want to respect and tell our kids about? I think he should be ashamed of himself. I think he should go in the background. But what does he do for the black people? He doesn’t do anything … I just don’t think he’s a good example for the children of Los Angeles. He would go and do what he did. And then get AIDS. I mean come on.” (In fact, Johnson has HIV, not AIDS.)

Sterling went onto compare Johnson unfavorably to Jews, whom, he said “want to help people. If they don’t have the money, we’ll loan it to you. If you don’t have interest, one day you’ll pay us back. I’m just telling you. [Johnson] does nothing, it’s all talk!”

Cooper then asked if Sterling was implying that African-Americans don’t give back to their communities as much as Jewish people do.

“There’s no African-American,” he began — but at this point, even Sterling could sense his screw-up. “Never mind. I don’t know. I’m sorry. You know they all want to play golf with me. Everybody wants to be with me.”

“What we saw tonight was a man with racism in his soul,” says former Clipper star Marques Johnson, now an analyst for Fox Sports Net. “And I’m not going to chalk this up to the ramblings of an 80-year-old man. This is who he is. He has this pre-conceived notion that African-Americans don’t help each other. Wow. That’s bullshit.”

Please, NBA owners, act fast. So we don’t have to hear any more of it. 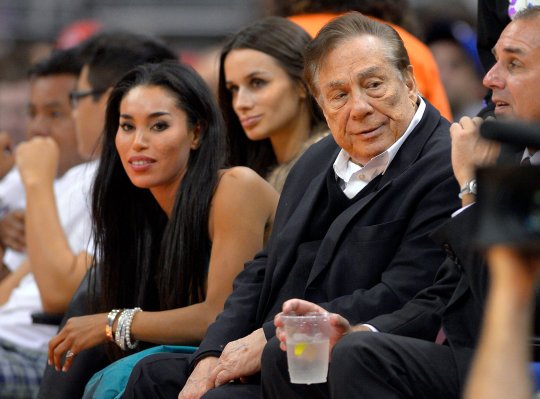 Donald Sterling: 'Am I Entitled to One Mistake?'
Next Up: Editor's Pick