When I reviewed Jawbone’s stylish and eminently pocketable Mini Jambox Bluetooth speaker last fall, I liked it. However, I found that it sounded nice at moderate volume levels but couldn’t be cranked up to boom like the chunkier original Jambox or (especially) Beats’ similar Pill. And some audio had less of a roomy, dimensional effect than when played with those other two models.

Now Jawbone is doing something which addresses both issues: It’s updating the Mini Jambox software to let two Minis work together. They can play an audio stream in unison—exactly the same thing, except on two speakers at once—or in stereo mode, with one speaker playing the left channel and the other the right one. If you’ve got two Mini Jamboxes handy, you can play your music really loud if you want, and position the speakers to create stereo separation to your liking.

Now, this isn’t a new idea for a tiny Bluetooth speaker. You can already do something similar with two Pills. Jawbone says that making feature work well and sound good is a tricky feat, which is why the company is only now rolling it out. Current owners of Mini Jamboxes will be able to download new software for their speakers, but the original Jambox, which remains on the market, isn’t getting an update.

Technically, the new features involve a peer-to-peer connection between Mini Jamboxes. You start by playing audio on one speaker, switch to unison mode and then—if you want—into stereo. The first speaker sends the stream from your phone or other device to the second one. Jawbone says the impact on battery life is negligible: Just a teensy hit on the first speaker’s life. (The company rates the Mini Jambox at 10 hours of continuous playback.)

I listened to two Mini Jamboxes in unison and stereo modes using speakers provided by Jawbone, and had a good time—but the user interface left me fumbling around.

The Mini Jambox isn’t sprouting any new controls to reflect the new features, so Jawbone had to implement them with the buttons the speakers already have. To put two speakers into unison mode, you simultaneously hold down all three buttons on the top of either speaker—power, audio down and audio up—and then do the same with the buttons on the second one. You can then go into stereo mode by pressing both volume buttons on either speaker. Pressing the volume buttons when you’re not already in unison mode does something altogether different: It toggles the LiveAudio 3D-sound mode.

You might get used to this, but as stipulated by McCracken’s 7th Law of Technology—which I just made up—it’s never a good sign when an interface involves pressing a certain sequence of buttons which are primarily devoted to unrelated tasks and bear no markings to remind you of their multiple purposes. Beats’ Pills have built-in NFC technology, which makes linking them up simple. You tap their logos together once to make them play the same audio, and twice to put them into stereo mode.

Still, this Mini Jambox update adds a useful new feature to a gadget which was good in the first place. And Jawbone is complementing the software update with a price cut. Normally $180, the Mini Jambox will sell for $130 for a limited time, making the notion of buying two of them a hundred bucks less intimidating. 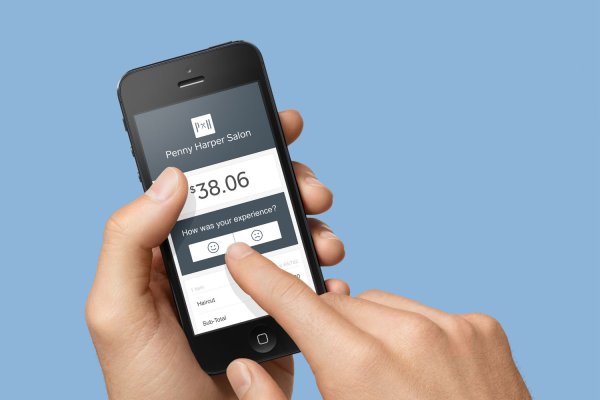 Square Uses Receipts for Customer Service
Next Up: Editor's Pick