The West Antarctic Ice Sheet is one of the keys to global sea level rise. Running up against the Amundsen Sea, it contains an estimated 527,808 cu. miles (2.2 million cu. km) of ice, about 10% of Antarctica’s total land ice volume. That’s enough ice to raise global sea level by more than 15 ft. (4.6 m) were it all to melt, collapse and flow into the ocean, which in turn would swamp coastal cities as far inland as Washington, D.C.

And according to new research, that’s exactly what’s beginning to happen.

Researchers from the University of California, Irvine, and NASA’s Jet Propulsion Laboratory have found that the group of six glaciers on the ice sheet directly draining into the Amundsen Sea are rapidly melting, as warming ocean water eats away at the base of the ice shelf. That’s making the ice around the West Antarctic Ice Sheet increasingly unstable—and the researchers could find no clear geographical obstacle that would slow down the retreat of the glaciers. Essentially, that means these glaciers—which collectively hold enough ice to boost sea levels by 4 ft (1.2 m)—”have passed the point of no return,” Eric Rignot, a glaciologist with UC-Irvine and NASA and the lead author on the paper, said in a statement. “The retreat of this ice seems to be unstoppable.”

Another new study in the journal Science by researchers at the University of Washington gives us an idea of how long that irreversible decline might take—and the news isn’t good. The researchers estimate that the Thwaites Glacier—one of the six Antarctic glaciers also studied in the NASA paper—could collapse within 200 to 500 years. And the collapse of the Thwaites and its bordering glaciers could lead to the loss of the entire West Antarctic Ice Sheet, like removing the keystone from a bridge.

It’s not news that the ice sheets of Antarctica are melting as the glaciers that border the sea retreat, adding to sea-level rise. (Sea levels only rise when land ice melts into the oceans—the loss of floating ocean ice, like the shrinking Arctic sea ice on the North Pole, makes no difference on sea level.) But both of these new studies provide far more precise data on just what’s happening in Antarctica—and what will likely happen in the future. The NASA/UC-Irvine study, published in the journal Geophysical Research Letters, is based on some 40 years of observation of the glaciers, chiefly using radar data from satellites. The researchers found that the grounding line—the point where the glacier first loses contact with the land as it moves into the sea—is retreating as the flow rate of the glaciers increases. As the grounding line retreats, more of the glacier lifts off the land and floats, becoming an ice shelf. As more of the glacier becomes waterborne, there’s less friction, which in turn speeds the flow of the glacier. At the same time, the glacier beds slope deeper below sea level, which further speeds the glaciers, like a roller coaster going down a hill. “They all reinforce each other to make the retreat unstoppable,” Rignot said.

The Intergovernmental Panel on Climate Change had projected that sea level will rise by about 35.5 in (98 cm) at most by 2100, but that prediction will likely need to be revisited in the wake of these new studies. As the Science study shows, it will likely be a few hundred years before the glaciers along West Antarctica fully collapse and melt into the sea. That does give us plenty of time to figure out a way to rapidly reduce carbon emissions and slow the pace of climate change, which in turn can give us more time to deal with sea level rise.

But these studies are sobering—the warming we have already baked into the climate system seems to have put into motion a physical changes that will utterly remake the planet we live on. 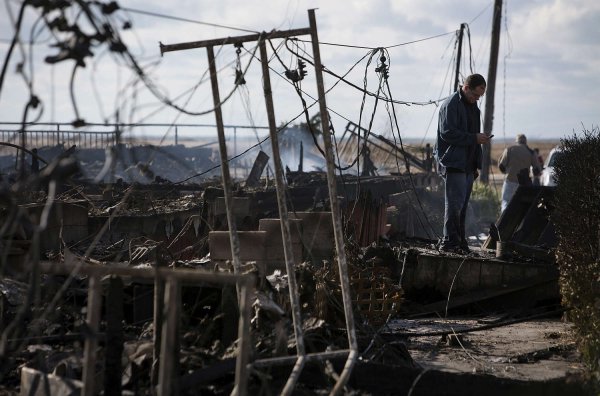 The Cost of Climate Change
Next Up: Editor's Pick