A new video released by the extremist group Boko Haram claims to show for the first time more than 100 Nigerian schoolgirls abducted last month, amid growing outrage at the kidnapping and the government’s response.

The authenticity of the video, first published by AFP on Monday, could not immediately be confirmed. It depicts the girls wearing hijab and praying. In the video, a leader of the group boasts that the girls, who came from both Christian and Muslim families, have converted to Islam. “We have indeed liberated them,” the militant leader Abubakar Shekau says in the video. “These girls have become Muslims, they are Muslims.”

Shekau says he will only release the schoolgirls if the Nigerian government frees Boko Haram prisoners. “It is now four years or five years that you have arrested our brethren, they are still in your prison and you are doing many things to them, and now you are talking about these girls?” he said. “We will never release them until you release our brethren.”

A top Nigerian official quickly dismissed the notion that the government would release Boko Haram prisoners in exchange for the safe return of the schoolgirls, AFP reports. “The issue in question is not about Boko Haram… giving conditions,” Interior Minister Abba Moro said.

White House Press Secretary Jay Carney told reporters Monday that the United States has no reason to doubt the authenticity of the video, and that U.S. intelligence agencies are scouring the video for clues.

“Our intelligence experts are combing over every detail of it for clues that might help in the ongoing efforts to secure the release of the girls,” Carney said.

A team of almost 30 American officials is already in the country assisting in the investigation; it includes four Department of State advisers, 17 Department of Defense advisers and four people from the FBI.

In an earlier video, Shekau had threatened to force the girls into marriage, saying he would “sell them in the market, by Allah.”

Boko Haram kidnapped 276 schoolgirls from their school in Chibok almost a month ago, and an international social media campaign is demanding their release. Nigerian President Goodluck Jonathan has been widely criticized for his failure to prevent the attack and for his response. The United States announced last week that it was sending a team to aid in search and rescue of the girls.

-with reporting from Zeke J Miller in Washington 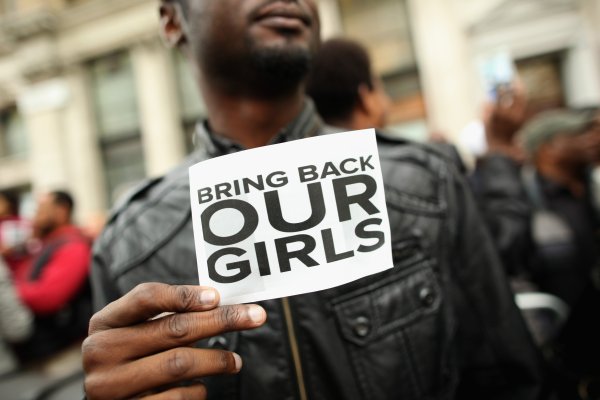 Nigerians Critical of State's Slow Response to Kidnappings
Next Up: Editor's Pick