How Seth Rogen Became the Stoner King of Comedy

Sporting a crew cut and a scowl, Seth Rogen assumes the voice of a farmer who dreams of planting “the finest reefer the Midwest has ever grown.” He adds: “That’s why when some idiot teacher tells me I’m not livin’ up to my potential, I just smile, ’cause I know I am.”

He was 16 or 17 when he auditioned for the cast of executive producer Judd Apaptow’s 1999 TV comedy Freaks and Geeks, but this one-minute tape already captures two of the three aspects of the Seth Rogen audiences have come to embrace: the pothead who’s an underachiever and proud of it. The third part of his appeal is the booming basso laugh, which makes him sound like the weirdest, most genial Jewish Santa Claus. (Rogen launched his career, in his hometown of Vancouver, B.C., as a teen standup comic making jokes about his bar mitzvah.)

(FIND: Freaks and Geeks on James Poniewozik’s list of the all-TIME 100 TV Shows)

This year, Rogen’s Christmas or Hanukkah came in May. Neighbors, which he starred in and produced, topped the weekend box office with $51.1 million — the strongest opening for a live-action comedy since Ted two summers ago, and an amazing start for a movie with a piddling $18-million budget. Evicting The Amazing Spider Man 2 from its one-week throne, Neighbors earned about as much money as The Great Gatsby did exactly a year ago.

Does this make Rogen the slob DiCaprio, the louche Leo? Maybe not: his affect doesn’t announce him as an obvious star. A pudgy fellow with glasses and, often, a scruffy beard, he’s the kind of actor who in earlier decades would have played supporting parts: the handsome hero’s wise-cracking pal. But movie comedy is a democracy whose most prominent players need not look as if they had stepped out of an Abercrombie & Fitch catalogue. Jonah Hill, another thoroughbred from the Apatow stable, is also roundish and Jewish, but with a prickly edge. Rogen’s special gift to audiences is that he projects a sweet, unthreatening geniality — and, though he might cringe to hear it, an essential niceness. That’s what makes him, at 32, the stoner king of comedy.

In the Freaks and Geeks class that also included James Franco and Jason Segel, Rogen’s comedy professor was Judd Apatow, the show’s executive producer. Apatow would go on to cast Rogen in a prominent supporting role in The 40 Year Old Virgin, give him the prime male role as the one-night stand confronted with fatherhood in Knocked Up and produce Superbad, the high-school comedy that Rogen and his writing partner (and fellow bar mitzvah student) Evan Goldberg had begun scripting when they were 13. Each movie had earned more than $100 million at the domestic box office by the end of 2007, when Rogen was all of 25.

The hits kept on coming for the actor-writer-producer, with the weed-driven, low-budget comedies Pineapple Express and This Is the End, which co-starred Franco and Hill, and took in another easy $100 million last summer. Add the distinctive voice work Rogen has contributed to such animated features as Shrek the Third, Horton Hears a Who!, Monsters vs. Aliens and Kung Fu Panda, and the total North American gross for his movies is more than $1.7 billion — a nice haul for the tyke tycoon of toke.

(READ: Mary Pols on Seth Rogen’s This Is the End)

Rogen’s Ken Miller in Freaks and Geeks was surly and acerbic — Segel asks him, “Can you ever not be sarcastic?” and Rogen replies, sarcastically, “I’m sarcastic?” — but with a furtive sensitivity. In one episode Ken stands outside the band room, watching with mournful devotion as his beloved “Tuba Girl” practices. That may have been the last time a Rogen character did any pining. He gives every evidence of being at ease with his girth (or he wouldn’t be photographed nude in the Knocked Up and Neighbors sex scenes) and the prematurely middle-age persona he has carried his entire public life.

Even in his early twenties, Rogen possessed the antiauthoritarian authority of an indulgent uncle who tells the kids to do whatever stupidly enjoyable thing they want. He’s a master of making a boast on matters other men might be ashamed of, as when he strode on stage at the 2012 Golden Globes in the company of sexy Kate Beckinsale and announced, “Hello, I’m Seth Rogen, and I am currently trying to conceal a massive erection.” But he also uses his celebrity in mature ways. He’s a spokesman for an Alzheimer’s awareness foundation — and, of course, a member of NORML, which agitates for the legalization of marijuana.

The best joke in Neighbors is that Rogen plays the voice of middle-age propriety — a husband and the father of an infant girl — to the rowdy young frat boys, led by the preening Teddy (Zac Efron), who have moved in next door. This battle of the generations has a couple of nuances: Rogen is just five-and-a-half years older than Efron, the erstwhile High School Musical heartthrob; and Rogen’s Mac, for all his annoyance that the loud music keeps him, his wife Kelly (Rose Byrne) and baby Sheila up at four in the morning, wants in on the frat guys’ hard partying. In his early thirties, he’s afraid that “All the things I used to do, I can’t do any more.” What is presented as a war between Teddy and Mac is really an internal struggle: Mac the protective father vs. Mac the fun-loving dopester. It’s a midlife crisis for a perennial teenager.

(READ: Lily Rothman’s 11 Questions for the Baby from Neighbors)

How will Rogen build on Neighbors’ break-out-hit status? It won’t take long to find out. Among his films near completion are the animated feature, Sausage Party — we’re guessing that, like most of Rogen’s movies, this will be rated R — and The Interview, in which he and Franco are a talk-show producer and his host who blunder into a U.S. government assignment to assassinate North Korea’s Kim Jong-un.

His most beguiling project is an adaptation of William Faulkner’s The Sound and the Fury, directed by Franco and featuring a diverse cast: Franco, his brother Dave (Efron’s second-in-command in the Neighbors frat house), Pineapple Express costar Danny McBride and Jon Hamm of Mad Men. We don’t know what role Rogen plays in this convoluted tale of Southern aristocracy gone to seed, but it should serve as a refutation to the reporter in This Is the End who told Rogen, “You play the same guy in every movie. When are you going to do something else?”

The Sound and the Fury could give a fascinating twist to the character that has made Seth Rogen one of America’s top stars: the friendly dopester almost anyone would want as a neighbor. 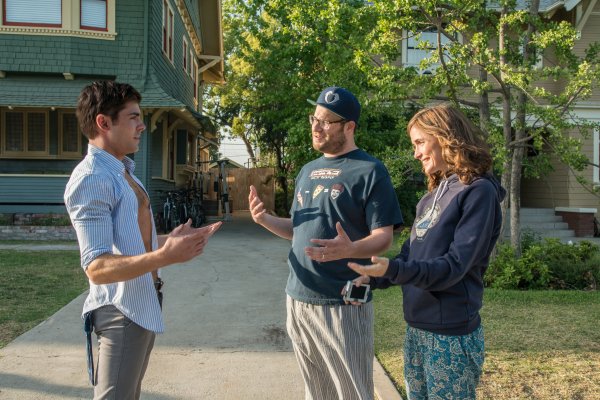