Members of an election committee empty a ballot box after voting closes at a polling station in Donetsk, Ukraine, Sunday, May 11, 2014.
Evgeniy Maloletka—AP
By David Stout

Separatists in eastern Ukraine say people there have voted overwhelmingly to secede from the state, following a Sunday referendum that Kiev and its Western supporters decried as illegitimate.

Approximately 89% of voters in the province of Donetsk — which already proclaimed itself a republic in April — have voted in favor of secession, organizers say. They also claim that 96% of voters in the neighboring province of Luhansk voted for independence. Donetsk is Ukraine’s most populous province, home to a tenth of the population.

“Counting the ballots proved to be surprisingly easy,” said Roman Lyagin, head of the separatist electoral commission in Donetsk, according to Russia Today.

“The number of people who said no was relatively small and there appeared to be only a tiny proportion of spoiled ballots, so we managed to carry out counting quite fast.”

The U.S. State Department earlier slammed the controversial referendum, warning that it stood in clear violation of international law.

“If these referenda go forward, they will violate international law and the territorial integrity of Ukraine,” said spokesperson Jen Psaki in a statement released on Saturday.

“The United States will not recognize the results of these illegal referenda.”

Russian President Vladimir Putin had also called for the referendum to be delayed; however, his spokesman Dmitri Pesko said residents in eastern Ukraine would not follow Putin’s advice because of an increase in fighting in the region against Kiev-backed forces.

While Sunday’s voting was largely a peaceful affair, Ukrainian national guardsmen reportedly fired their weapons as they tried to close a polling station in Krasnoarmeisk, killing an unspecified number of people. 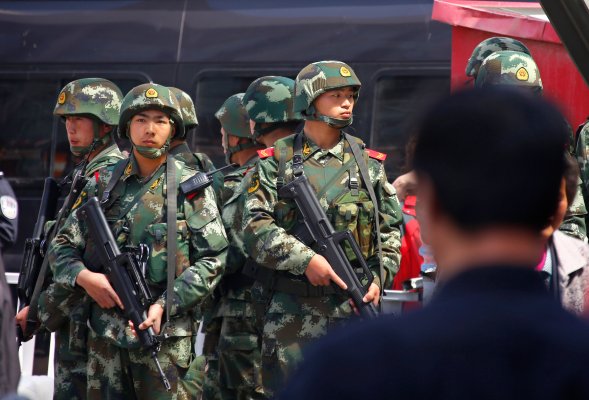 China Arrests More Than 200 for 'Terrorist Videos'
Next Up: Editor's Pick