A Ugandan newspaper published a list of the country’s supposed “200 top” gay citizens on Tuesday, following enactment of a law outlawing homosexuality.

The Red Pepper, a tabloid based in the capital city Kampala, printed the list of names, some with photographs, beneath the headline “EXPOSED!”, the Associated Press reports. They include a Catholic priest, a hip-hop star and the prominent gay rights activist Pepe Julian Onziema. Some of the people on the list had not publicly described themselves as gay.

The story came after the government gave final approval legislation making homosexuality and the promotion of it a crime. Despite widespread international condemnation and threats by the United States that it would cut aid to Uganda if the country enacted the law, President Yoweri Museveni insisted it was necessary as a response to the interference of the West in Uganda’s affairs. He was quoted on Monday as saying he had been told “what they [gays] do is terrible,” describing them as “disgusting.”

Most Popular on TIME
1
Metal Monolith Discovered in Utah Wilderness
2
What to Know About Hillbilly Elegy
3
Who Should Be TIME’s Person of the Year for 2020? Vote Now 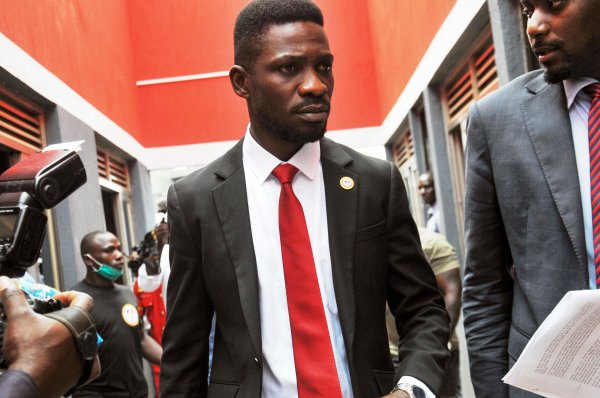 Uganda's Reggae Star Turned Politician Bobi Wine Puts His Future on the Line for a Shot at the Presidency
Next Up: Editor's Pick