Conchita Wurst representing Austria celebrates with the trophy after winning the 59th annual Eurovision Song Contest (ESC) at the BW Hallerne in Copenhagen, in this May 10, 2014 picture provided by Scanpix Denmark.
Scanpix Denmark/Reuters
By Lisa Abend

Was there ever a more perfect Eurovision winner than Conchita Wurst? Possessor of long, brunette locks that undulate down her shimmering gown, an alto that sounds straight out of an Andrew Lloyd Webber musical circa Jesus Christ Superstar, and a beard that a Brooklyn bartender would envy, the Austrian contestant took the top honors last night in Copenhagen. It was a victory that thrilled the 11,000-strong audience, and not only because her winning song, “Rise Like a Phoenix,” was so very … very. To many gathered for what is often called the Gay World Cup, Wurst’s victory was also a victory against homophobia. And, not incidentally, Russia.

An annual competition that pits three dozen or so European nations against one another in a glitter-spangled maelstrom of wind machines, detachable clothing and the cheesiest tunes in pop music, the Eurovision Song Contest is exactly what it says. Held in the homeland of the previous year’s winner, the competition, in which each nation’s contestant performs a song written specially for the occasion, is broadcast live throughout the continent (and in Australia, for reasons best understood by the Australians themselves). The winner, who in the past has included pop luminaries like ABBA (Sweden) and Celine Dion (Switzerland), is decided partly by a jury made up of professionals and partly by viewers, who vote for their favorites via text message or app. Which is precisely where things get interesting. Though any geeked-out aficionado will tell you that Eurovision is all about the music, politics has a way of slipping in. This year was no exception.

“We love her!” gushed David Christley, of Wurst, in the minutes before the competition started. Though British-born and living in Holland, Christley and his partner were wearing postcards of the Austrian candidate tucked into their neon orange top hats. “It would be such a slap in the face to Russia if she won.”

Indeed, when Austria announced its candidate, several Russian organizations called for a boycott of Eurovision 2014. St. Petersburg legislator Vitaly Milonov — the same one who said that gay athletes could be subject to arrest at the Sochi Olympics if they “promoted” homosexuality to minors — referred to Wurst as a “pervert” whose presence at what he disapprovingly called “Europe’s gay parade” would “insult millions of Russians.” Thousands of Belarusians also protested, signing a petition for block her from the Belarusian broadcast of the competition.

If anything, those objections only increased support for Wurst, whose fans at last night’s competition took to wearing crocheted chinstraps meant, apparently, to simulate beards. But they were not the only reason why anti-Russian sentiment was running high in Copenhagen. The country’s recent incursions into Ukraine also played a role. Weeks before, Eurovision organizers decided that, for purposes of the competition, Crimea still counted as Ukraine. It was unclear however, which nation that helped, since the rules of the competition prevent voters from casting a ballot for their own country. So although Crimea might not, in the Eurovision universe, be Russian, it could now vote for Russia.

In Copenhagen, however, the Russian contestants (twin sisters named Anastasiya and Maria Tolmachevy) were booed during the semifinals. Inexplicably dressed in a wolf suit, Anders Lundsten of Gothenburg, Sweden, said he felt sorry for the girls. “But I also feel sorry for the Ukrainians. No one should be taken over by another country.”

Mariya Yaremchuk, the Ukrainian contestant, didn’t want anybody’s sympathy vote. In an interview with TIME, she said that getting to the final was “like getting all your happy birthdays in one day,” and she was convinced she had arrived there solely on the merits of her peppy “Tick Tock,” which she screeched sang onstage in front of a man running in an outsize hamster wheel. “Of course, as a Ukrainian girl, I am very nervous about what is going on at home. But as a singer, my main goal is to express my wish of happiness to all people. For me, it is all about the music.”

Ah yes, the music. Looking like an extra from Fiddler on the Roof, Swiss candidate Sebalter warbled lyrics no lover could resist — “I am the hunter, you are the prey/ Tonight I’m going to eat you up” — to a Mumford and Sons–esque tune, complete with Swiss banjo. Despite a hairdo that towered a good 12 in. from his scalp, the lead singer of the French boy band Twin Twin pranced around the stage, singing insistently about his desire for a “moostash,” while images of facial hair flashed behind him. Poland surpassed even that display of good taste. Sounding vaguely like a Japanese hip-hop band but dressed in cleavage-baring bodices and traditional skirts, Donatan and Cleo belted out their song, “We Are Slavic.” When they reached the stirring chorus — “We are Slavic, we know how it is/ We like to shake what mama in the genes gave us/ This is the hot blood, this is our Slavic call” — one well-endowed band member sat on the corner of the stage and simulated, shall we say, a particularly enjoyable butter-churning session.

In comparison, the Tolmachevy twins, who began their performance conjoined by their blond ponytails before separating to opposite ends of a giant seesaw, seemed downright musical. But when the votes started coming in, and a few countries — most of them former Soviet bloc — gave their points to Russia, the booing began again. At one point, the sounds of displeasure were loud enough that the presenter — Pilou Asbæk, better known to viewers of Borgen as “spin doctor” Kasper Juul — had to interrupt his shamelessly pandering jokes about well-muscled men to remind the audience, “It’s all about music and love.”

Alina and Vitaly knew better. Ukrainian agriculture students from Kharkov, they didn’t want to give their last names but weren’t afraid to say whom they were voting for. “Ukrainian contestant not so good,” said Alina. “But we love the Russians! We will vote for them.”

In the end, that love wasn’t enough for the Barbie-like Tolmachevy twins, who came in seventh. The girls had declined all requests to speak with foreign media, preferring, as one of their handlers said, “to focus on the music.” Still, it was hard not to see something more than a catchy ditty between the lines of their entry, “Shine”: 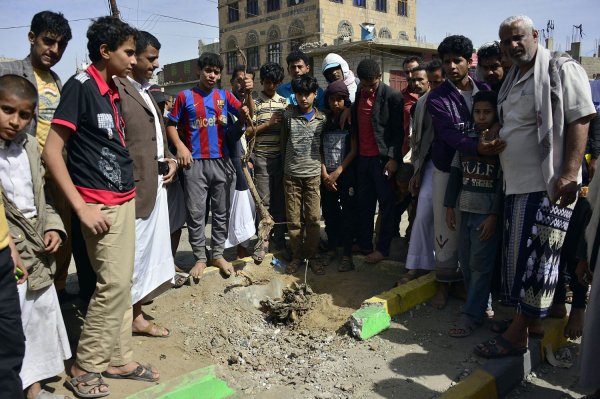