Burma Accused of ‘Crime Against Humanity’ Over Persecution of Rohingya

A Rohingya woman sits by a fire at a crowded internally displaced persons (IDP) camp Nov. 23, 2012 on the outskirts of Sittwe, Burma
Paula Bronstein / Getty Images
By Charlie Campbell

The Burmese government’s treatment of the Rohingya ethnic minority is tantamount to a “crime against humanity,” according to a new report released by watchdog NGO Fortify Rights.

Released Tuesday, the 79-page report claims that the government of Buddhist-majority Burma, officially known as Myanmar, has been methodically oppressing the Muslim Rohingya for decades.

Based on a dozen leaked state documents, as well as public records and numerous interviews, Policies of Persecution: Ending Abusive State Policies Against Rohingya Muslims in Myanmar says the maltreatment of Rohingya is punishable under international law.

“The [Burmese] government is systematically persecuting Rohingya on the basis of ethnicity, religion, and at times gender,” says Matthew Smith, executive director of Fortify Rights.

While the abuse of Rohingya has long been known, and implementation of repressive policies recorded anecdotally, Smith says his report marks the first time these have been proved at national government level. “This architecture of abuse contributes to political instability and violence and must be lifted immediately,” he says.

Around a million Rohingya — dubbed “virtually friendless” and “one of the world’s most persecuted peoples” by the U.N. — live in the western Burmese state of Arakan, also known as Rakhine, but they are not accepted as citizens. Sporadic bloodletting between them and the state’s Buddhist communities has claimed more than 280 lives in the past two years. Around 140,000 Rohingya now live in squalid displacement camps after their homes were torched.

Confidential documents cited in the Fortify Rights report show that Rohingya couples cannot live together unless they are married, and must meet onerous administrative requirements to do so, as well as pay exorbitant fees.

Regional Order 1/2005, translated and republished by Fortify Rights, lays the foundation for a two-child policy enforced in certain townships, requiring married Rohingya to “limit the number of children, in order to control the birth rate so that there is enough food and shelter.” Penalties for unsanctioned pregnancies drive many Rohingya women to seek unsafe illegal abortions, with untreated health complications and even death a frequent occurrence.

Rohingya must also obtain official permission to travel outside their home townships, meaning access to education and health care is severely hampered.

“These restrictions must be addressed by the government,” Abu Tahay, chairman of the Union Nationals Development Party, which represents the Muslim Rohingya, tells TIME. “These are basic rights of the people as well as basic rights of citizens of this country.”

The Rohingya’s lot has worsened considerably since sectarian violence erupted in June 2012. The government’s immediate response, as revealed in remarks made to parliament in August 2012 by Burmese Home Affairs Minister Lieut. General Ko Ko, was to tighten rules on Rohingya even further, “in order to handle traveling, birth, death, immigration, migration, marriage, construction of new religious buildings, repairing and land ownership and [the] right to construct building[s].”

Survivors have since been confined to tarpaulin ghettos, to which international observers are denied access and where health charities operate under constant threats of violence from Rakhine extremists. Malnutrition and disease are rife, and the attacks continue. Just last month, at least 48 Rohingya were killed when Buddhist mobs attacked a village in northern Arakan state, according to the U.N. (The Burmese government vehemently disputes this version of events.)

In response, tens of thousands of Rohingya have fled or tried to flee the country through the Bay of Bengal. Many have drowned in the perilous attempt, putting to sea on rickety boats bound for perceived safe havens, like Muslim-majority Malaysia.

Burma’s Deputy Information Minister Ye Htut is dismissive of the new report. “We never pay attention to organizations such as Fortify Rights, which are openly lobby groups for the Bengalis,” he tells TIME. (Many in Burma use the term Bengali to describe the Rohingya to support the spurious notion that they are recent interlopers from neighboring Bangladesh, even though their residence in Burma can be traced back generations.)

Sadly, such slights from officials are hardly remarkable. Ye Myint Aung, Burmese ambassador to the Philippines., famously remarked during his previous post as Consul-General to Hong Kong that the Rohingya were “ugly as ogres.” The truth is often likewise. 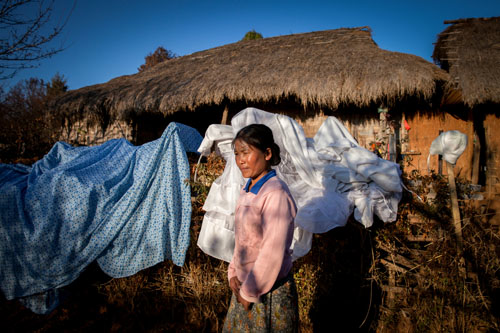 Rape Is a Weapon in Burma's Kachin State, but the Women of Kachin Are Fighting Back
Next Up: Editor's Pick