Watch the Great Lakes Freeze Over

You can measure a winter in many ways: temperature records, snow cover, even travel delays. But to truly see how frigid this winter has been—at least for the eastern half of the U.S.—you need to go way up. Satellite imagery shows that an incredible 88% of the Great Lakes—Superior, Michigan, Huron, Ontario and Erie—are now frozen over. That’s the largest ice cover the Great Lakes have experienced since 1994, and it means that there is an astounding 82,940 sq. miles (214,814 sq. km) of ice covering the biggest collection of fresh water in the world.

How unusual is this? Since 1973, the average maximum ice cover extent for the Great Lakes has been just 50%, and in those four decades, the ice extent has surpassed 80% just five times. (In 2002, just 9.5% of the Great Lakes froze over during the winter, the lowest extent on record, while the greatest extent was 94.7% in 1979.) And no lake is as iced over as Superior, where the extent is 95.3%.

The unusually large extent of ice is due to a logical factor: it’s been really, really cold around the Great Lakes. In the Midwest this January, temperatures averaged 5 to 10 F (3 to 6 C) below the 20th century average. But the endless snowfall around the Great Lakes region—Chicago, which borders Lake Michigan, experienced its third-snowiest January on record, and Detroit had its snowiest month ever—played a role as well, insulating the ice cover when temperatures would rise. If you’re wondering why Lake Ontario has such a smaller amount of its surface covered in ice, that’s because the lake is unusually deep, which gives it a tremendous heat storage capacity.

But numbers can only tell you so much. TIME editor Jonathan Woods has stitched together imagery provided by National Oceanic and Atmospheric Administration’s (NOAA) Great Lakes Environmental Research Lab and taken from NASA’s TERRA and AQUA satellites, using data gathered by the MODIS system (Moderate Resolution Imaging Spectroradiometer). The time lapse imagery shows a truly stunning Lake Superior and the rest of the Great Lakes from September—when all five were open—to now, when ice covers the vast majority of the lakes. You’ll notice how early the freeze began, with ice reported in the bays and harbors of the Great Lakes as early as the end of November, as opposed to the usual time of mid-December. From that early build—due to cold temperatures in the fall and early winter in the Great Lakes—the ice just continued to grow.

For all that, 2014 could well be an aberration. Satellite data shows a generally downward trend in Great Lakes ice cover from 1972 to the present, thanks largely to the general increase in winter temperatures over the same time period. The winter of 2014 will go down in the record books—and there’s no clearer evidence of that than the image of the Great Lakes, sheathed in ice. But we may not see too many repeat performances in a warmer future.

(MORE: The Not So Sustainable Sochi Winter Olympics) 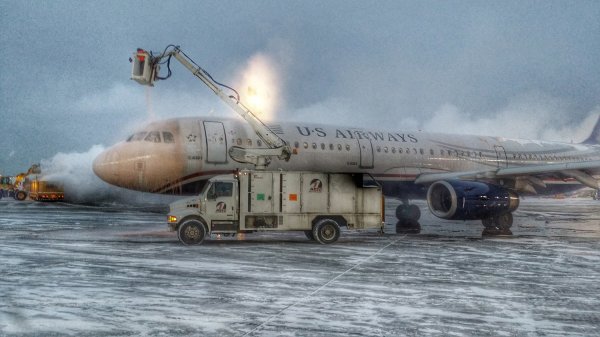 Behind the Scenes at One of the World's Busiest Airports
Next Up: Editor's Pick