Study: The Number of Teens Reading for Fun Keeps Declining

A new study shows that kids read for fun less and less as they get older, with 45% of 17-year-olds saying they read by choice only once or twice a year.

Research released today from Common Sense Media shows that not only do reading rates decline as kids get older, but they’ve also dropped off significantly in the past 30 years. In 1984, 8% of 13-year-olds and 9% of 17-year-olds said they “never” or “hardly ever” read for pleasure. In 2014, that number had almost tripled, to 22% and 27%. Girls also tend to read more than boys, as 18% of boys say they read daily, while 30% of girls do.

Parents are also reading to their kids less than ever. In 1999, children ages 2 to 7 were read to for an average of 45 minutes per day. In 2013, that number had dropped to an average of just over 30 minutes per day. The researchers also found racial disparities: 75% of white children get read to every day, while only 66% of black children do and only 50% of Hispanic children. That disparity can translate into educational differences as well. In 2013, 46% of white fourth graders were reading proficient, while only 18% of black students and 20% of Hispanic students were reading at grade level. Those trends stayed roughly the same through eighth grade.

The decline in reading for fun is most easily explained by technological advances (i.e., kids would rather text than read), but education could have something to do with it as well. It’s no surprise that 53% of 9-year-olds read for fun every day, but only 19% of 17-year-olds do. Yes, the teenagers have more Instagrams to post, but they also have more homework to do.

But it’s impossible to ignore the prevalence of technology here: 45% of 17-year-olds say they only read once or twice a year, but in 1984, 64% said they read once a week or more. The researchers also investigated the effects of e-reading, which appear to be gaining traction as a substitute for paper books, even among kids. In 2010, 66% of 9- to 17-year-olds said they were loyal to paper books over e-books. That number dropped to 58% by 2012.

And so we beat on, boats against the current, borne back ceaselessly into the — Snapchat! 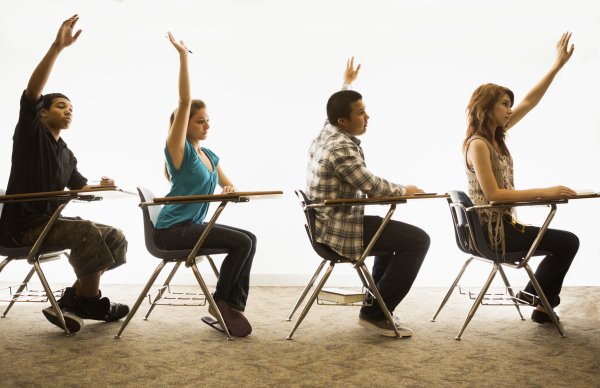 High School Seniors: Read Up!
Next Up: Editor's Pick