During the opening credits of Ronan Farrow Daily‘s premiere episode Monday, it became clear just how MSNBC is pitching its 26-year-old news host wunderkind. The writing on a large blue graphic behind Farrow’s head (bringing out his Sinatra-esque blue eyes) said it all: Ronan is the network’s de facto “Spokesperson For Youth.” See?

Farrow started college at 11 and graduated from Yale Law at 21. And in the last five years, when Farrow wasn’t working as a speechwriter and advisor to the State Department, he has been cultivating his Twitter personality — plied with quick witticisms relating to news events and the proclivities of his father (ahem) Woody Allen. From the beginning, RFD is pegged as a youthful hashtag-and-crowdsource-friendly space for national and international news.

So what did we learn?

1. As a green host, there’s bound to be an adjustment period. But given Farrow’s rhetorical capabilities, it probably won’t be a long one. Still, in the first minutes of the show Farrow acknowledged his inexperience: “I’m also new to this — what’s going on here — which camera am I looking at — who knows!” Some live tweeters were unimpressed:

But many liked his soft-spoken style and unrehearsed dreaminess:

2. Farrow is young. This isn’t a new revelation, per se, but it was particularly pronounced given the 20-plus year age disparity between Farrow and most of his guests.

3. The show will feature gimmicky daily segments (there’s a “hero” and “zero” of the day), many of which employ social media and other youth-friendly tools.

4. The show takes a casual tone to the news. Farrow thanked his “panel extraordinaire” for being “super real” and for supplying “Republican creds.”

5. Ronan Farrow is really attractive, and looks a lot like his maybe-biological father Frank Sinatra. And people will never stop talking about it. 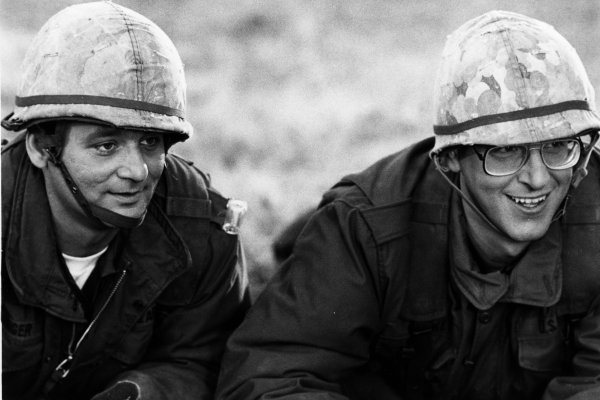 Bill Murray Remembers Harold Ramis: "He Earned His Keep On This Planet"
Next Up: Editor's Pick