Former Ukrainian Prime Minister Yulia Tymoshenko praised protestors for freeing Ukraine from the “cancer” of President Viktor Yanukovych’s rule, in an emotional speech at the opposition’s protest camp in central Kiev Saturday just hours after being released from prison.

She saluted the crowd’s bravery in their fight against the ousted President Yanukovych, who fled the capital earlier in the day after protestors took over streets and government buildings.

“You are the best of Ukraine,” she told the huge crowd from her wheelchair before breaking down in tears, reports the BBC. “Because nobody could do it – not other countries, nobody – could do what you have done.” The freed former prime minister is considered Yanukovych’s arch-nemesis after a series of political battles over the last decade.

But Tymoshenko also warned the crowd not to leave the square until the work was complete. “Until you finish this job and until we travel all the way, nobody has the right to leave,” she said.

Ukraine’s parliament voted Friday to release Tymoshenko from prison, more than two years after she was handed a controversial seven-year jail sentence for abuse of power. A court found her guilty of criminally exceeding her constitutional authority when she agreed to a gas deal with Russia which was seen to have disadvantaged Ukraine.

The opposition seized control of Kiev Saturday as Yanukovych fled to the eastern city of Kharkiv where he traditionally has a more solid base of support. Parliament swiftly voted to move elections to May 25 and passed a resolution removing Yanukovych from power. The past week of violence in Ukraine has seen pitched street battles and scores of deaths in Kiev. 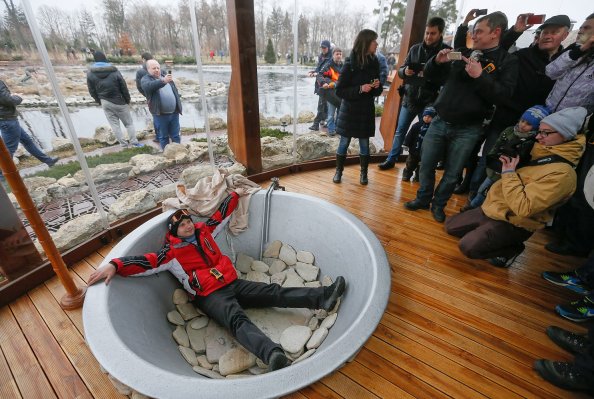