Sons, daughters and husbands across the U.S. were picking up their last-minute gifts this week ahead of the annual ritual to honor mothers. Like every year since it became a national holiday a century ago, moms will be showered with cards, chocolates and flowers on Sunday.

But Mother’s Day, unlike those All-American dates of Thanksgiving and July 4, is not exceptional to the U.S. In many countries, religious or cultural holidays revolving around women and families have evolved into the their own celebrations of motherhood. In other countries, the Hallmark-card-giving American holiday has merely been imported. And in still others, it’s something of a mix.

Here’s a look at how nine countries around the world honor their moms.

A 1950 law in France establishes the “fetes des meres” on the fourth Sunday in May (May 25 this year), except when it overlaps with Pentecost, in which case it’s pushed back a week. But beyond the date, Mother’s Day in France looks very similar to in the U.S.—cards and flowers are bestowed and family dinners are had.

While relatively new to the country, the imported holiday of Mother’s Day aligned with traditions of filial piety in China, as it has in countries the world-over. On the second Sunday of May, an increasing number of Chinese celebrate the day with gifts and festivities.

As early as the 16th century, the U.K. observed on the fourth Sunday of Lent a day called Mothering Sunday, when families came together to attend church. In the early 20th century, Mothering Sunday—which had evolved into a tradition of spending family time at home—was fused with the Hallmark-card-giving American holiday, but it has retained its traditional name and date (March 15 this year).

Mexico takes very Mother’s Day very seriously. In fact, Manuel Gutierrez, president of the national association of restaurateurs, told the Washington Post in 2012 that May 10—whatever the day of the week—is the busiest day of the year for Mexican restaurants. Flowers are a must, but the day is also filled with music, food, celebrations, and often a morning serenade of the song “Las Mananitas” from mariachi singers:

“Awaken, my dear, awaken/ and see that the day has dawned/ now the little birds are singing/ and the moon has set.”

Mother’s Day is a rather new phenomenon in India, but the imported holiday is making up for lost time. On the second Sunday of May (May 11 this year, just like in the U.S.), mothers are showered with flowers, cards and gifts.

Japan initially aligned Haha no Hi with the birthday of Empress Koujun, whose tenure spanned most of the 20th century. But Mother’s Day has since been moved to the second Sunday in May, when the Japanese load their mothers with gifts—primarily flowers. A recent poll of 1,000 adult men found that 87% planned to give something to their moms.

In the former Soviet Union, mothers were celebrated on International Women’s Day on March 8, a celebratory date that has since become an internationally-observed day to honor women and reflect on the goal for gender equality. In 1998, post-Soviet Russia introduced Mother’s Day on the last Sunday in November, but most of the gift giving still happens in March.

Mother’s Day in Egypt and several other Arab countries falls on March 21, the first day of spring. The widely observed unofficial national holiday is a day of gift-giving and celebration.

The holiday is observed on Aug. 12 to mark the birthday of the revered Queen Sirikit. Ceremonies and parades celebrate the dual intentions of the holiday, with jasmine the go-to gift. 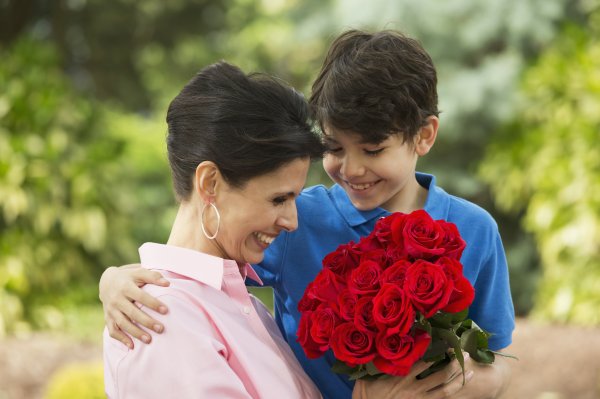