Senator Al Franken has a pretty good idea of what the term “net neutrality” means—and that, he says, puts him head-and-shoulders above many of his colleagues in the U.S. Congress.

“We literally have members of Congress—I’ve heard members of the House—say, ‘We’ve had all this innovation on the Internet without net neutrality. Why do we need it now?’” he told TIME in an interview last week. “I want to say, ‘Come on, just try to understand the idea. Or at least just don’t give a speech if you don’t know what you’re saying. Please—it hurts my head.”

Since coming to the Senate in 2009, Franken has been among the most outspoken proponents of so-called net neutrality rules, which require Internet service providers to treat all internet traffic—no matter the content or who produced it—equally. Under such rules, big broadband providers, like Comcast or Verizon, would be prevented from blocking or hampering consumers’ access to certain content, or prioritizing access to other content.

Franken’s colleagues who “don’t understand” the idea of net neutrality argue that the internet has been a bastion of innovation and investment for decades without such rules on the books. But the landscape of the internet has changed over the last decade, with once-tiny internet start-ups growing and consolidating into massive enterprises like Google, Amazon, and Comcast (the biggest internet service provider in the country). Franken argues that under such circumstances, net neutrality rules are necessary to protect tiny start-ups, which might become the next YouTube or Twitter, from being blocked by its now enormously powerful competition.

“The idea of net neutrality is not to have the government ‘regulate the internet,'” Franken said. “It’s to keep the internet open, so that we still have the innovation and investment we’ve had in the past.”

The Federal Communications Commission (FCC) is now considering new net neutrality rules, which have been roundly panned by consumer and open internet advocates, including Franken. The proposed rules would allow content companies to purchase better delivery speeds and quality from Internet service providers, which, Franken said, “is the opposite of net neutrality.”

The new rules will create a “fast lane” and a “slow lane” on the internet—those in the fast lane will pay a premium for the opportunity, giving an advantage to Internet startups with deep pockets. “That’s pay for play,” Franken said, echoing the sentiments he put into a public letter to FCC Chairman Tom Wheeler last week. “That’s antithetical to net neutrality.”

The net neutrality discussion comes at a time when the television industry is undergoing a revolution. As the line blurs between watching traditional cable programming, like AMC’s “Breaking Bad,” on your living room TV, and watching premium programming, like Netflix’s popular show “House of Cards,” on your laptop or tablet, how the Internet is regulated will affect how—and for what price—TV is piped into your home, too.

Having come from the front lines of the television industry—Franken was a writer and performer for Saturday Night Live for more than three decades—the issue is particularly dear to his heart. Net neutrality rules would make it illegal for a cable TV and broadband company like Comcast, which owns NBC Universal and the rights for all its programming, from making its own video content stream more quickly over broadband than video from competing cable programmers or Internet-only upstarts, like Netflix or Amazon.

Franken has also been an outspoken critic of the proposed merger between Comcast and Time Warner Cable, two of the three biggest broadband providers in the country. The merger will make it harder for independent TV producers to survive, he argued; if the combined Comcast-Time Warner Cable company, which will control at least a third of the American cable market, doesn’t want to rebroadcast your show, you’re toast. (TIME magazine is owned by Time Warner, which separated from Time Warner Cable in 2009.)

On Wednesday, Franken spent a few minutes talking to TIME about the misunderstood concept of net neutrality, the cable companies’ merger, and the future of the internet. This interview was edited for length and clarity.

Why should the public care about the Comcast and Time Warner Cable merger or the net neutrality rules?

They should care [about the merger] because it’ll affect their cable bill, their bill for their Internet, and what kind of service they get. When you have the biggest cable provider buying the second biggest cable provider, you end up getting a big company—a behemoth—that cares even less about customer service. I’m not the first one to notice that Comcast is already pretty famous for providing bad service. And [the public] should care [about both the merger and net neutrality rules] because when you have competition, you have innovation. YouTube was invented in a pizzeria in San Mateo because you had net neutrality in place. They didn’t have to pay Comcast so people could see it.

How does the Comcast-NBC Universal merger in 2010, which you also opposed, affect the proposed merger today?

When [Comcast was] buying NBCU, they explicitly said, ‘We’re not broadening our distribution. This vertical integration is okay because we’ve still got other competitors.’ They named Time Warner Cable as their primary competitor. The CEO of Comcast Brian Roberts actually said that—he said, ‘There might have been motivation to over charge, but the existence of Time Warner Cable will keep us honest.’ And now they’re saying the opposite. They’re saying, ‘Time Warner Cable is not a competitor. We don’t compete with Time Warner Cable at all.’ They are absolutely contradicting everything they said four years ago.

The discussion about the merger is happening at the same time that the FCC is considering new net neutrality rules. How does one inform the other?

Comcast would love to keep the focus on TV, but the bigger issue here is broadband. This merger would be the first largest broadband provider in the country acquiring the third largest. Between them, they’ll control 40% of the internet broadband market, and data shows that about 30% of the people in this country have only one choice of broadband provider in their area. This would give [the new combined company] tremendous leverage in the market. What’s going to happen when one company has that kind of power?

Are the new net neutrality rules that FCC Chairman Tom Wheeler will propose next week consistent with what President Obama promised in 2007?

I believe [Obama] pledged to appoint FCC commission that would honor net neutrality and keep net neutrality as law. The latest proposed rules by Wheeler—what he’s really talking about is creating a fast lane where people can pay to have their content treated unequally. That’s not net neutrality. That’s pay for play. That’s antithetical to net neutrality.

So what should be done instead? 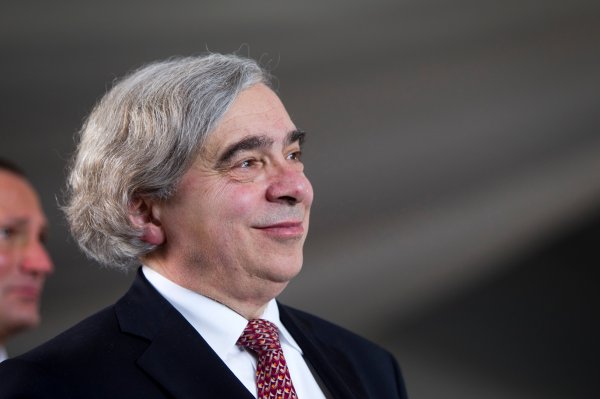 Energy Chief Dishes on Baseball, Natural Gas and More
Next Up: Editor's Pick