London protest against the kidnapping of more than 200 Nigerian girls on May 9, 2014 in London, England.
Dan Kitwood—Getty Images
By Laura Olin

“Where are the stolen girls of Nigeria? And why don’t we care more?” BoingBoing.net asked on April 30th, two weeks after more than 300 girls were kidnapped from their school dormitory in Nigeria. The next day, a group of African American women on Twitter wondered what the coverage would look like if hundreds of white girls had gone missing: “There’d already be a Lifetime movie in the works.”

Seven days later, virtually no news-consuming person in the West could be ignorant of the story, Nigerian President Goodluck Jonathan had been forced to commit more resources toward the search, and the U.S., France, and the U.K. had all promised aid as well.

What changed in those seven days?

The unserious-sounding but ultimately serious answer seems to be: a hashtag campaign.

#BringBackOurGirls started in Nigeria on April 23rd by desperate parents and activists who didn’t believe their president when he said he was taking action to recover the kidnapped girls. They wanted to put pressure on the government to do more. They tried everything they could think of to raise awareness of the kidnappings within and beyond Nigeria.

One of those things was #BringBackOurGirls. It worked, likely beyond anything they’d imagined or hoped for.

Encapsulating both a story and a cause in just four words, the hashtag at first began to take hold on Twitter only within Nigeria. Activists wrote it on signs to bring to street protests. Then it began to spread within Africa.

April 30th, two weeks after the kidnapping, was a turning point. News broke that the terrorist group that took the girls, Boko Haram, planned to sell them into forced marriages for $12 apiece.

Over the next few days, #BringBackOurGirls went from 10,000 mentions a day to 100,000 or 200,000. It jumped oceans, and thousands of non-Africans began using it. As often happens, celebrities got involved, to dubious effect: Kim Kardashian, Christiane Amanpour, Chris Brown–with no apparent recognition of hypocrisy–and, mostly recently, Anne Hathaway. Two weeks after its first use, #BringBackOurGirls had gathered 2 million mentions.

In recent days, #BringBackOurGirls has verged into feeling like Twitter’s cause célèbre, something people participate in regardless of whether they know the larger context or the campaign’s aims. Critics have begun dismissing it as empty online activism that won’t, in the end, bring back the girls.

We can’t know if the hashtag will ultimately help deliver the girls back their parents. But #BringBackOurGirls has felt like one of the first Twitter causes that has a chance of actually changing outcomes, especially since former and current Secretaries of State Hillary Clinton and John Kerry got involved and Michelle Obama tweeted a photo of herself holding a sign with #BringBackOurGirls written on it in big block letters.

Secretary Kerry followed up his tweet with an announcement that the State Department would send military and law enforcement personnel to help advise Nigerian officials in the search for the girls.

The First Lady’s photo led to another, even more widespread round of media coverage: the New York Post, for example, ran the tweet as the full cover of their front page with the headline, “YES, MICHELLE!”

But beyond that, the First Lady’s participation felt like a public rebuke of President Jonathan and his wife Patience, who has faced criticism for reportedly ordering the arrest of activists protesting the government’s response to the kidnappings and even accusing protesters of making up the abductions.

Ignore millions of regular people participating in a hashtag campaign? Sure.

However trivial hashtags can feel, their most basic function is as a tool for focusing attention. Crucially, they’re also free and open to anyone to use. So desperate Nigerian parents, without extraordinary power or resources can draw the kind of attention that leads to real pressure and real power.

That feels a little bit world-changing. And activists who started the hashtag have gotten out of it exactly what they’d hoped for. In the space of a week, they made it impossible for President Jonathan to continue chalking up their daughters’ abduction as the latest Boko Haram atrocity to be grimly accepted and eventually forgotten.

It’s not everything, but it’s a start. And the world is now talking about 276 stolen girls in Nigeria when before it wasn’t talking about them at all. 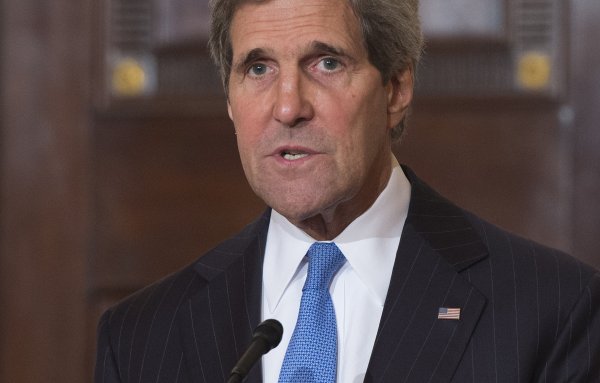 The Nigerian Schoolgirl Kidnappings Are None of Our Business
Next Up: Editor's Pick