How Popular Will Your Name Be in 25 Years? 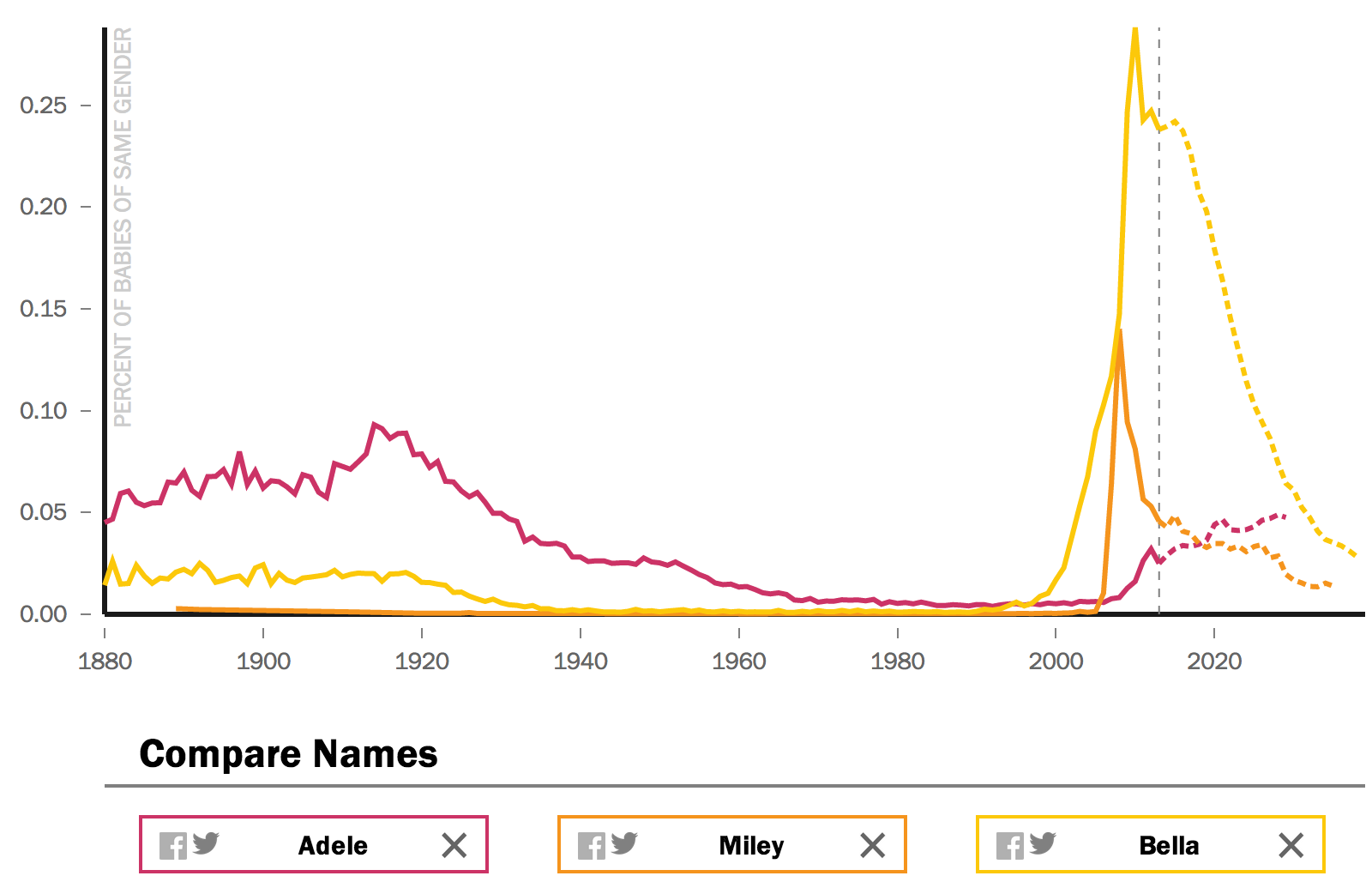 Popular names follow a familiar cycle: They become increasingly common as new parents jump on the bandwagon, only to peak and decline as everyone on the playground starts answering to the same name. Some old standards lie dormant for half a century before gradually returning–hello, Evelyn. Others skyrocket and decline in a few years (that’s you, Miley).

Parents who want to stay ahead of the curve have two major things to consider in a name: the present popularity of a name and where in its popularity cycle it currently sits. The first part is easy to get from the Social Security Administration, which published the most popular baby names of 2013 on Friday. (In the United States, Noah has unseated Jacob as the most popular boy’s name; Sophia still reigns supreme among girls.) The second is not so simple. Like stocks, hot names can stay dominant for a decade or flame out after a year.

The tool above, developed with Chris Franck, an assistant research professor in statistics at Virginia Tech, predicts how a name will rise or fall in the next 25 years by examining the performance of earlier names that followed similar patterns of popularity.

In the case of Adele, for example, our model found that the name is currently following a pattern very similar to names like Grace, Eva, and Lavinia, which were similarly popular in the early 20th century and enjoyed a comeback in the recent past. (Adele’s spike in popularity might have something to do with this one.) Because these names are farther along in their lifecycle, they offer some insight into what the next few years will look like for Adele.

Based on this method, here are a few predictions: Noah’s best days are behind him. We predict that 2013 was the most popular year the Biblical name will have in many years to come. Emma is very likely to be the top girl’s name of 2014. And keep your eyes out for Harrison and Emmett. Meanwhile, Sophia’s best days just might be behind her.

One can test a model like this by making predictions based on data from earlier years and seeing how those predictions compare to the actual results. Below is an image of how this method predicts the growth and decline of Madison, which peaked in 2001, based only on data about the name’s growth through 1990. By comparing Madison‘s early behavior to similar names (graphed here in gray), the model was able to produce a prediction (dashed line) that closely following the actual data (solid) over the next decade.

This model does not have the statistical rigor of a formal experiment, but it does produce surprisingly accurate results when tested against historical data. Others who have looked at baby names in detail have also found that first sound of in a name — the “K” sound in Katie and Christina or the “M” in Mary and Michael—also rises and falls in popularity.

The source code for this project is available on Time’s GitHub page.

Read next: Bookmakers Are Betting That the Royal Baby Will Be Named Alice

You May Also Like
Read Next
This Woman Is the Last Civil War Pensioner Alive
Next Up: Editor's Pick