6 Mother's Day Factoids to Show You're Not a Horrible, Ungrateful Son or Daughter

In advance of your Mother’s Day plans (or lack thereof) not going over well today, here’s some ammunition for making the case that you—and your mom—could have done a lot worse.

Moms get more love than dads. Or at least we spend a lot more on moms. According to the National Retail Federation, average household spending on Mother’s Day is roughly $50 higher than it is for Fathers Day.

Mother’s Day = Scam Day. The Better Business Bureau warns that consumers should “proceed with caution to avoid falling victim to a Mother’s Day scam,” which might consist of phony coupons and vouchers, a phishing e-mail, or an e-card of mysterious origin that is “as likely to contain destructive malware as warm wishes,” notes Consumer Reports. So if you’re desperate, you can use the possibility of a scam as an excuse for why you didn’t pony up and get mom a gift. You know: “Sorry, ma, just trying to save you from the horrors of identity theft.”

Thoughtful, hand-picked gifts are overrated. In a survey conducted on the behalf of PriceGrabber, the majority of consumers (60%) said they’d just order something online as a Mother’s Day gift. As for what moms want on Mother’s Day, 29% said they favored the not-remotely-personalized gift of a gift card, which was the second most common answer after a “gift” that doesn’t cost anything—spending quality time with one’s family (44%).

Mom would probably return whatever you picked anyway. Nine out of ten consumers polled by RetailMeNot.com said they suspect that their mothers have returned or exchanged a Mother’s Day gift at least once. (Only 30% of the moms surveyed admitted to doing so, but what else do you think they would say.)

Tons of sons and husbands whip up plans at the last minute. Among the men polled by MyTime.com, 42% said they’ll make Mother’s Day plans only a few days beforehand or just throw something together on Mother’s Day itself. So you’re in good (or at least abundant) company if you’re totally winging it at the last minute. Just don’t be among the 6% of men who have forgotten about Mother’s Day altogether in the past.

Thousands must think moms really love beer and wings. Some 35,000 people reportedly brought their moms to Hooters last year on Mother’s Day. So on Sunday you can tell your mom, “Hey, at least I didn’t drag you to Hooters last year for your big day.” And if you did—hey, moms eat there free after all on Mother’s Day—at least you weren’t the only one. 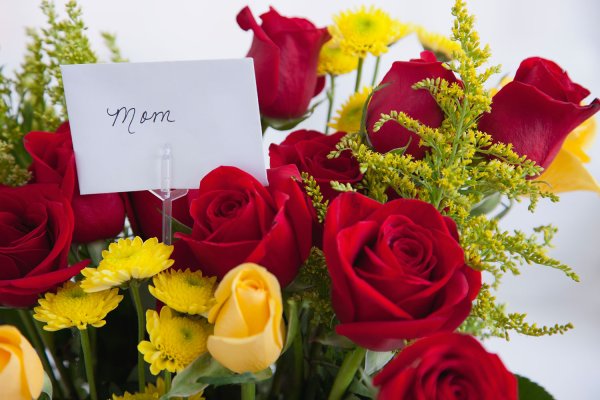 Every Mother's Day Freebie and Deal You Could Possibly Want
Next Up: Editor's Pick