The Best (and Worst) Advice From Famous Moms

In honor of Mother’s Day, we’ve rounded up some of the of the most thoughtful — and sometimes not so thoughtful — advice from moms who don’t hesitate to make their feelings known.

The singer, who became a mother almost two and a half years ago, shared advice in Out Magazine on how to be powerful as a woman by embracing many identities at once.

“There is unbelievable power in ownership, and women should own their sexuality. There is a double standard when it comes to sexuality that still persists. Men are free and women are not. That is crazy. The old lessons of submissiveness and fragility made us victims. Women are so much more than that. You can be a businesswoman, a mother, an artist, and a feminist—whatever you want to be—and still be a sexual being. It’s not mutually exclusive.”

Following in the footsteps of Jenny McCarthy, former reality TV star Kristin Cavallari admitted to not vaccinating her son during an interview on Fox & Friends during which she urged mothers to think of vaccination as a personal choice

“Listen, to each their own. I understand both sides of it. I’ve ready too many books about autism and there’s some scary statistics out there. It’s our personal choice, and, you know, if you’re really concerned about your kid get them vaccinated.”

The former secretary of state shared some of her wisdom at the opening of the Women of the World Conference in New York in April, talking about the double standard for women and advice for how they can get ahead.

“Too many young women are harder on themselves than circumstances warrant. They are too often selling themselves short. They too often take criticism personally instead of seriously. You should take criticism seriously because you might learn something, but you can’t let it crush you. You have to be resilient to keep moving forward despite whatever the personal setbacks and even insults that come your way might be. That takes a sense of humor about yourself and others, believe me this hard-won advice. But it is a process. You need other women, you need your friends to support you, and you need male friends as well as female ones. You need good role models all of that is true. But at the end of the day, you really have to be good if you have high aspirations. You need to be well-educated, prepared, and willing to take your chances when they come your way. Cut yourself a little bit of slack.”

The Maleficent actress has become an outspoken advocate for all the rights and health of all women, especially in the wake of her preventative double mastectomy last year. She’s also a mom of six who spoke to Entertainment Weekly earlier this year about how motherhood has changed her life.

“It changes you forever. It changes your perspective and it gives you a nice purpose and focus. I am disheartened by many things but I wake up, like I woke up this morning, to kids and we talk and we laugh and we play and I’m light again, and I’m a kid again, and I’m loving and soft again because they’ve brought that back in my life.”

US First Lady Michelle Obama meets with a group of mothers to discuss how health care reform could benefit their families at the White House in Washington, DC, Dec. 18, 2013.
Jim Watson—AFP/Getty Images

Earlier this year, shortly after Justin Bieber was arrested on drunk driving charges and authorities claimed his private jet reeked of marijuana, First Lady Michelle Obama talked about what she would do if she were the singer’s mother during an interview with Univision Radio host Enrique Santos. The mother of two (Sasha, 12, and Malia, 15) reminded listeners that Beiber’s just a kid despite his larger than life role as an entertainer.

“They just want you near, you know – they want that advice from a parent. They want to see you on a daily basis, because the thing is he’s still a kid. He’s still growing up. So, I would pull him close.”

The queen of healthy living can’t seem to avoid controversy this year, especially after she unwittingly stirred up another round in the mommy wars by commenting on how difficult it is for her as a working actress on a movie set versus a regular mom with a nine to five job. But with a recent statement on her lifestyle site, Goop, she attempted to smooth some ruffled mommy feathers.

“Is it not hard enough to attempt to raise children thoughtfully, while contributing something, or bringing home some (or more) of the bacon? Why do we feel so entitled to opine, often so negatively, on the choices of other women? Perhaps because there is so much pressure to do it all, and do it all well all at the same time (impossible).”

The viral sensation sparked conversation online after a Valentine’s Day-themed editorial in the Wall Street Journal encouraged women to start looking for a husband instead of focusing on their career.

“You should be spending far more time planning for your husband than for your career—and you should start doing so much sooner than you think. This is especially the case if you are a woman with exceptionally good academic credentials, aiming for corporate stardom.”

This actress has never hesitated to talk about how much faith she has in her kids. After people criticized her for allowing her daugther Willow to cut her hair, she spoke out on her Facebook page about the decision-making process.

“The question why I would LET Willow cut her hair. First the LET must be challenged. This is a world where women,girls are constantly reminded that they don’t belong to themselves; that their bodies are not their own, nor their power or self determination. I made a promise to endow my little girl with the power to always know that her body, spirit and her mind are HER domain.”

The Facebook COO might be best known for her “Lean In,” career manifesto for young women, but she’s also also shared advice about motherhood during an interview with NPR last March.

“I want everyone to be able to choose, but I want us to be able to choose unencumbered by gender choosing for us. I have a 7-year-old son and a 5-year-old daughter. Success for me is that if my son chooses to be a stay-at-home parent, he is cheered on for that decision. And if my daughter chooses to work outside the home and is successful, she is cheered on and supported.”

The actress, fashion mogul and mother of two, has been very public about her pregnancies and post-baby weight loss campaign with Weight Watchers. And she continues to showcase her early years of motherhood through social media, regularly posting to Instagram with captions like: “Falling asleep looking at pictures of my kids…now I know what my life is about. I am so grateful.” But her gratefulness doesn’t come without the nerves of a new mom, as she told People during her second pregnancy, “There are little things that you kind of obsess over. I never knew how protective I was until I had my own child. I’m already thinking about intruders coming into the house and what our escape route would be.”

To no one’s surprise, comedienne Tina Fey mixed humor into her honesty about motherhood. She told David Letterman that though it was great to be home with her kids more, “you’re just like a human napkin for your kids, like, they just wipe their face on you and stuff.” And she’s learned to take even the difficult moments of motherhood with a grain of salt, considering when her youngest daughter was two, she tried to choke Fey after being upset about bath time being over. “It’s so funny because they’re not strong enough to kill you and they want to kill you so bad!”

Keeping up with motherhood is no small feat for the queen of the Kardashian Klan. Her daughter, aptly named North, with rapper Kanye West, gave the reality star a new take on racism, she explained on her blog. “To be honest, before I had North, I never really gave racism or discrimination a lot of thought. It is obviously a topic that Kanye is passionate about, but I guess it was easier for me to believe that it was someone else’s battle. But recently, I’ve read and personally experienced some incidents that have sickened me and made me take notice. I realize that racism and discrimination are still alive, and just as hateful and deadly as they ever have been,” she wrote. “I feel a responsibility as a mother, a public figure, a human being, to do what I can to make sure that not only my child, but all children, don’t have to grow up in a world where they are judged by the color of their skin, or their gender, or their sexual orientation. I want my daughter growing up in a world where love for one another is the most important thing. So the first step I’m taking is to stop pretending like this isn’t my issue or my problem, because it is, it’s everyone’s… because the California teenager who was harassed and killed by his classmates for being gay, the teenage blogger in Pakistan who was shot on her school bus for speaking out in favor of women’s rights, the boy in Florida who was wrongly accused of committing a crime and ultimately killed because of the color of his skin, they are all someone’s son and someone’s daughter and it is our responsibility to give them a voice and speak out for those who can’t and hopefully in the process, ensure that hate is something our children never have to see.” 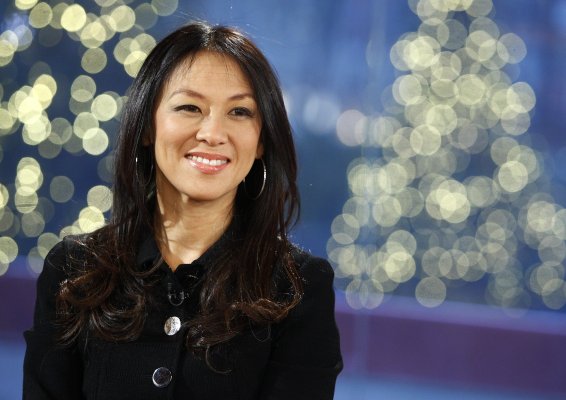 A Case for Parenting the Dolphin--Not Tiger--Mom Way
Next Up: Editor's Pick