Wisconsin Gov. Scott Walker came to Washington this weekend with a clear message to deliver to the national press: He’s not New Jersey Gov. Chris Christie.

In the swanky J.W. Marriott hotel just blocks from the White House, which both governor’s have hopes to soon occupy, the two embattled Republicans presented radically different strategies for handling swirling questions about the actions of former political aides.

Walker, who is facing questions over a newly released trove of documents from an investigation into his first campaign, has nonchalantly stopped for repeated questions from reporters, conveying a ‘nothing to see here’ message. He’s glad-handed lobbyists and activists for hours on end, unfazed by attention of the press. Christie, meanwhile, has been almost entirely out of view at the National Governors Association meeting, continuing a weeks-long effort to avoid the limelight. In a closed-door meeting of governors Saturday, several governors described Christie as uncharacteristically quiet and reserved. The New Jersey Governor appeared at just a pair of official NGA events, breaching past the assembled press and confining most of his activities to quietly fundraising for the Republican Governors Association.

Six former Walker aides and allies have been convicted of wrongdoing following an investigation into improper campaign activities by official staff when Walker was Milwaukee County executive mounting a campaign for the governor’s mansion. The release last week of tens of thousands of pages of documents from that first investigation was branded as “old news” by Walker, who noted repeatedly that a Democratic prosecutor had closed the investigation last year without any accusation that he had done anything improper. “People want to go through 27,000 pages plus of details, and our approach is ‘case is closed,'” Walker said. “A Democrat district attorney looked at it, and he’s done. It’s done.”

Walker did, however, note that the investigation into Christie aides’ involvement in closing lanes to the George Washington Bridge is “just beginning.”

“He addressed it early on, but obviously he’s not out of the woods yet,” Walker said, comparing their situations while exiting a NGA reception for state adjutants general that Christie skipped. “He’s got the legislature which is not on his side politically, and they’ll probably drag it out for some time.”

The twin controversies have vastly different stakes for the lawmakers. Christie, seen for the better part of a year as the GOP’s 2016 front-runner, has faced seemingly unending interest from the media in his scandals, not least because of its placement in the New York City media market. Copious unanswered questions and unreviewed documents make calculating the ultimate fallout difficult, while the source of his troubles, relatable traffic problems, will be a hard image to shake.

But for Walker, safely away from the Acela corridor and dealing with a four-year-old probe, there has been little more than a week of bad press and isolated embarrassing stories about aides’ old emails. The investigation was a prominent story line through his 2012 recall election, from which he emerged stronger than ever. A second probe, meanwhile, is continuing into Walker’s recall election.

The Democratic National Committee has tried hard to equate the two scandals this week, noting the common story lines of improper activity by senior aides and questions about how much the lawmakers knew about it. Democrats are hoping the scandals will help bring down Walker this fall and plan to use Christie’s troubles to defeat the Republican candidates he stumps for in his role as chairman of the RGA. “I’m just grateful that I don’t have Democratic governors who have those challenges,” said Vermont Gov. Peter Shumlin, the chair of the Democratic Governors Association. “We don’t get indicted, we don’t get criminal investigations—we create jobs.” 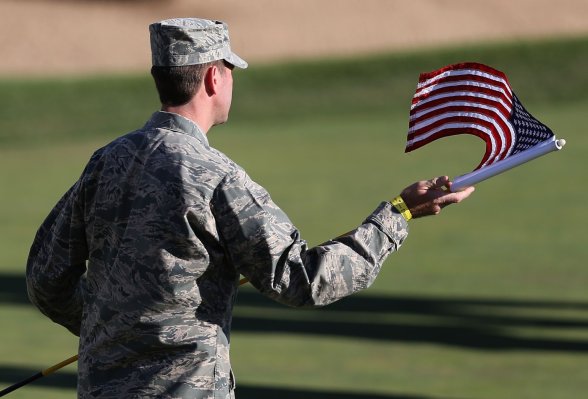 Pentagon: American Flags Must Be 100% American
Next Up: Editor's Pick