Sigrid Kaag, special coordinator of the Organization for the Prohibition of Chemical Weapons–U.N. joint mission on eliminating Syria's chemical weapons, speaks at a news conference in Damascus on April 27, 2014
Khaled Al Hariri—Reuters
By Michelle Arrouas

The last chemical weapons slated to be removed from Syria are “inaccessible” because of fighting between rebels and the government, a U.N. official said Thursday.

The 16 containers of dangerous chemical agents are located close to the capital, Damascus, in an area being fought over by both sides, the Associated Press reports.

The head of the U.N. mission in charge of destroying Syria’s chemical weapons, Sigrid Kaag, called on countries with clout over the rebel groups to help arrange the cease-fire needed to allow for the safe removal of the chemical weapons.

“Obviously the issue is that the materials leave the country as soon as possible,” she told reporters.

Danish and Norwegian ships are waiting to transport the containers from a nearby port to a U.S. vessel for destruction.

Last month it was revealed that almost all of Syria’s declared chemical weapons had been removed ahead of the June 30 deadline. However, at a U.N. Security Council meeting, several countries, including the U.S., France and Britain, expressed concern over whether President Bashar Assad’s regime was holding on to undeclared chemical weapons, Reuters reports. 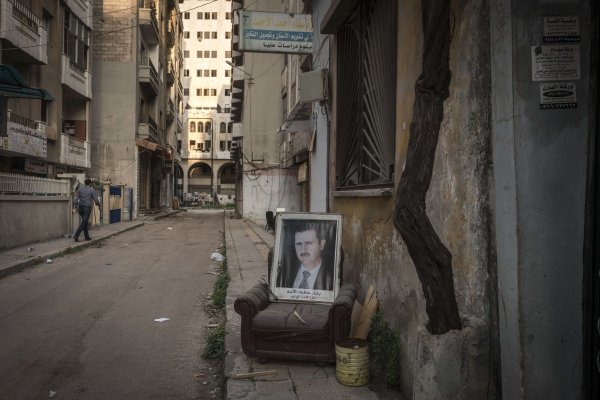