Already reeling from her Wednesday ouster, former Thai Prime Minister Yingluck Shinawatra was impeached by the National Anti-Corruption Commission (NACC) on Thursday, while Bangkok braced itself for the prospect of political violence during a demonstration scheduled for Saturday by her supporters.

Thailand’s Constitutional Court removed Yingluck, 46, from office after judges decreed that she benefited personally from the transfer of a senior civil servant in 2011. The NACC then began impeachment proceedings for dereliction of duty over a rice-subsidy scheme that may have emptied the public purse to the tune of $21 billion. Both decisions were unanimous.

“The committee has investigated and there is enough evidence to make a case … We will now forward it to the Senate,” said NACC president Panthep Klanarong.

How an impeachment could be brought against Yingluck in a position she no longer holds remains unclear, although she faces a five-year ban from politics if convicted. Several similar cases are also pending against her.

On Thursday, Phuchong Nutawong, the Election Commission’s secretary general, cast doubt on whether an election that offers the best hope of halting a full-scale political meltdown would go ahead. “We may have to postpone it,” he told reporters. The poll had been scheduled for July 20.

For now, a caretaker administration remains, but it is hamstrung by the judiciary. Paul Chambers, director of research at the Institute of South East Asian Affairs at Chiang Mai University, says the current limbo demonstrates that normal checks and balances no longer exist between the executive, legislature and courts.

“It seems that in Thailand increasingly the applecart has been upset, in that the judiciary increasingly dominates the other two,” he says, “It’s a juristocracy underwritten by the monarchy and guarded by the military.”

The nine members of Yingluck’s Pheu Thai Party–dominated Cabinet who served with her in 2011 were also sacked by Thailand’s highest court Wednesday. Almost two dozen Cabinet members remain in their posts, but the People’s Democratic Reform Committee (PDRC), which has spearheaded recent antigovernment demonstrations, pledged to name an alternative administration.

That vow came in a “final push” on Friday, during which thousands of PDRC sympathizers laid siege to most state-owned TV stations, attempting to bully broadcasters into ignoring progovernment demonstrations.

“They must not report the news on behalf of the tyrants any longer, because it distorts the truth,” said protest leader Suthep Thaugsuban.

Theatrics aside, the power struggle is now returning to the streets, and bloodshed may be inevitable. Tens of thousands of Red Shirt supporters of Yingluck are slated to march through the sprawling capital Saturday. On Wednesday evening, blasts damaged a hospital, a bank and the home of one of the nine judges that deposed Thailand’s first female Prime Minister. Some 20 people have already died in clashes over the past six months.

Without immediate compromise, “there will be an increased risk of Red Shirt paramilitaries staging sporadic hit-and-run attacks on antigovernment Yellow Shirt–affiliated assets in the next two months,” says Alecia Quah, senior analyst for IHS Country Risk. Thursday’s ruling, she adds, “renders the prospect of a political compromise between the Pheu Thai and opposition forces even more remote.”

Fears are meanwhile growing for the health of the Thai economy during the continuing political crisis. “If a resolution is not found soon, our below-consensus [growth] forecast of 2% for this year will come under threat,” says Krystal Tan, Asia economist for Capital Economics. 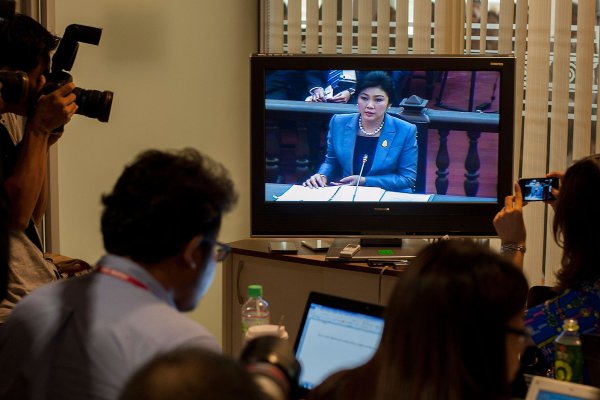