There was never a reason, really, for humility. Not with the Heisman Trophy — he was the first freshman to ever win it — the records, the partying and palling around with LeBron and Drake. He could make the “cash-money” gestures on field, and be the most cocksure college kid in the land, because Johnny Football almost always delivered on the field. Johnny Manziel did it his way. He was going to enjoy the hell out of his life. He was a college kid, and going to do college kid things. He wasn’t going to miss out on all the fun.

The NFL, however, has a way of crushing you, in front of millions, in prime time. LeBron hoped Manziel would be picked first overall, by the Houston Texas, essentially his hometown team. Not quite. As expected, Houston took Jadeveon Clowney, the defensive end from South Carolina. The Jacksonville Jaguars, with the third overall selection, picked the first quarterback of this year’s draft, Blake Bortles of the University of Central Florida. Cleveland, at number four, seemed like a good fit for Manziel: the Browns have used 17 starting quarterbacks since 1999, the most in the NFL. They could use a franchise player, a little stability, at that position. But then the Browns traded that pick to Buffalo. The Bills have a young quarterback, EJ Manuel, they still believe in. Manziel wasn’t going to Buffalo.

For two years, Manziel helped drive huge interest in college football. The whole “Johnny Football” persona transcended the sport. But in New York, player after player passed him in the green room, their NFL dreams fulfilled — guys who never got a sliver of the attention Manziel attracted. Back-to-back, two of Manziel’s Texas A&M teammates got picked before him: Jake Matthews, an offensive lineman, by Atlanta with the sixth pick and Mike Evans, his 6’5” wide receiver, his favorite target, by Tampa Bay with the seventh.

The NFL can send a cruel message. The guy who blocked for you, and the guy who caught your passes, went ahead. To his credit, Manziel was magnanimous, hugging his teammates on their way to meet Roger Goodell at the podium.

Cleveland was up at number eight; maybe they were about to pull off a heist. They bet their man, Manziel, would still be on the board. So they could trade away the number four for Buffalo’s first round pick next year; pick Johnny Football at number eight, and snare another prospect in the process. The breathless crowd waited.

Cleveland took a cornerback, Justin Gilbert. If Manziel chugged a beer in the green room at that point, no one would have blamed him.

So where could he go now? A tantalizing prospect: Dallas, at number 16. America’s team, America’s more alluring college player: what a match. Those big ol’ stars on the Cowboys helmets are there for a reason. Jerry Jones loves them. Sure, he has a starting quarterback, Tony Romo, who drives Cowboys fans crazy but is a more than capable NFL player. Still, Manziel could come in, learn from Romo, maybe take over in a few years. And Jerry Jones likes money. Even as Manziel held a clipboard for Romo, Jones could still sell all those Johnny Football jerseys. And if Romo, who is coming off back surgery, ever faltered….

The Cowboys picked Zack Martin, an offensive lineman from Notre Dame. They passed on the celebrity and picked a guy to protect Romo, their current prized possession.

Time for some shots?

As team after team passed over him, Manziel was losing prestige, and even more importantly, money. The farther you fall, the less you make. At the number four pick, according to one estimate, Manziel could have pocketed a $14 million signing bonus. The Cowboys, at 16, would have given him about $5.3 million.

Manziel sat through it all, trying his best not to hide his disappointment. Still, you could sense it. Finally, around 10:45 p.m. eastern time, it was over: Manziel was a member of the Cleveland Browns. Cleveland made another trade, and grabbed the 22nd pick from the Philadelphia Eagles. Cleveland was clever all night. Instead of just taking Manziel with the fourth pick, they got a cornerback, an extra first rounder next year, and still wound with Manziel later in the first round. All this dealing probably cost Manziel a good $10 million in signing bonus.

But Manziel should be able to compete for a starting spot, against Brian Hoyer, right away. As he approached the stage to greet Goodell, he made the cash-money gesture — hey, NFL QBs, at any draft spot, make good coin — as the Browns fans in New York cheered like crazy.

Manziel’s far from the first star to fall further than expected. Poor Aaron Rodgers was projected as a possible top five pick back in 2005: he dropped all the way to 24, to the Green Bay Packers, who still had Brett Favre kicking around. Rogers looked so sad and confused. Now, he’s one of the best.

Johnny Manziel could wind up as a great one too. But Johnny Football — that guy is already long gone. 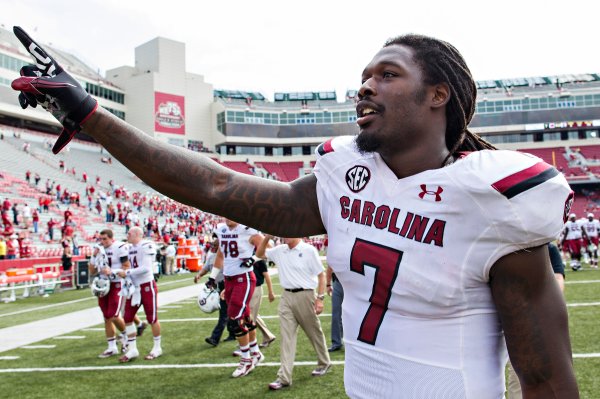