One of the nice things about being Jimmy Iovine is that when you call Dr. Dre, the world’s most famous hip-hop producer, he actually picks up the phone. That’s likely because the two have had a habit over the years of making millions on various collaborations. Iovine–who first earned a name for himself behind the mixing console, recording rock classics such as Bruce Springsteen’s Born to Run and U2’s Rattle and Hum–signed a deal with Dre’s Aftermath Entertainment in 1996, after Dre had established himself as a hitmaker with the seminal rap squad N.W.A. Since then, Dre has produced Eminem, 50 Cent, Eve and Gwen Stefani for Iovine’s company, Interscope Records. And for more than five years, the two have been partners in Beats by Dre, one of the hottest brands in consumer electronics. Beats has succeeded in transforming headphones from a ubiquitous freebie thrown in the box with your phone or music player into a must-have fashion accessory–one consumers are willing to pay $300 for.

“The younger generation had no idea what music was supposed to sound like,” says Iovine, 60, leaning back into a spacious couch in the living room of his home in Los Angeles’ Holmby Hills neighborhood, a block from the Playboy Mansion. “Both of us take great pride in the fact that this company is turning a lot of young people on to quality sound,” he continues, a hint of Brooklyn in his voice. “I knew people were going to dig it, but I didn’t know it was going to be this big,” adds Dre, 48, over speakerphone.

Beats’ signature thundering bass, sometimes criticized as overwhelming, is well suited to modern music driven by the bottom end and offers a direct challenge to competitors such as Bose and Sennheiser. Beats’ design–bulky, dazzlingly colored–stands out in a crowd. (The next time you’re in an airport terminal or crowded subway car, look around. The brightest object in your field of vision is likely to be a set of Beats perched on a teenager’s head.)

But to see Beats merely as celebrity-endorsed headphones misses the mark. As with any successful luxury product, Beats isn’t just selling functionality or fashion. It’s offering access to the ostentatious lifestyles of the pop stars Iovine and Dre have turned into household names.

The formula has won over legions, pushing the Santa Monica, Calif.–based company’s annual revenue to more than $1 billion. According to market researcher NPD Group, the privately held Beats controls almost a third of the $1.8 billion U.S. headphone market. Since its founding in 2008, Dre and Iovine have expanded the business to include wireless boom boxes, computer speakers and audio systems in cars.

Now the two are embarking on the riskiest gamble in the company’s short history. They are betting that if the Beats image can sell tony headphones, it can also win customers in the record industry’s most crowded and tumultuous new sector: streaming music. On Jan. 21, the company will launch Beats Music, a subscription service for phones, tablets and computers. The app will offer access to an unlimited number of songs, as well as an innovative way of creating custom playlists, for about $10 a month.

Beats Music will have to compete with the likes of Spotify and Pandora, not to mention Apple and Google. To date, nobody has figured out a way to make much money from streaming. Even with royalty rates slashed to levels that make musicians howl, profits have been meager at best. Currently, the vast majority of subscribers are listening for free on ad-supported plans. But aside from a short trial period, Iovine won’t be giving anything away for free.

To launch the music service, Beats has brought another pop star into the fold: Trent Reznor, the sulking mastermind behind Nine Inch Nails. Reznor, who has arranged the award-winning soundtracks of films like The Social Network and The Girl With the Dragon Tattoo in recent years, has been tasked with turning a piece of software people are used to getting for nothing into something they will want to pay a premium for. Which sounds daunting–until you consider that Beats is the company that got people to cast their free earbuds aside and pay a premium to replace them.

There are two sets of speakers in a recording studio. One pair is tiny, the other is huge. The tiny ones are for the engineer and producer so they can hear clearly what is going on in the music. The big ones are for the musicians. They are tuned to sound as if the drum track could crush a city block or the singer is the second coming of Beyoncé. Audiophiles like headphones with sound like that of the tiny speakers–accurate. Traditionally, selling expensive headphones meant catering to them.

Then came a chance meeting between Dre and Iovine on Malibu’s Carbon Beach in 2006. The rap kingpin was unhappy with his advisers. “They want me to sell sneakers,” he complained to Iovine.

Dre’s insight was that even though finicky music fans want the tiny-speaker sound, most people would prefer the swaggering bravado of studio playback. Iovine, meanwhile, enlisted his network of stars to make the headphones cool. A succession of special editions–jewel-like Heartbeats by Lady Gaga meant to appeal to young girls, workout-oriented Powerbeats by LeBron James–helped the brand broaden its appeal.

The company also went to great lengths to make its products feel worth the price. It hired Robert Brunner, Apple’s industrial-design director for most of the 1990s, to define the look and feel. That’s why opening a new pair of Beats involves an elaborate ritual of unpacking. “I always felt that the buying and unveiling of something should have some drama about it,” says Brunner. “We just want to make sure people felt like, Wow, I got something really special here.”

By 2011, sales had surged to more than half a billion dollars annually. That year, Taiwanese cell-phone maker HTC put up $300 million to buy a 51% stake in Beats. The partnership, which seemed like an ideal way to match the headphones business with the fast-growing one for mobile devices, allowed Iovine and Dre to break away from Monster completely by the end of 2012 and set up their own manufacturing. But despite aggressive co-branding, the HTC partnership didn’t yield any mega-hits. Last year, the duo bought back outstanding shares from HTC and raised a $500 million investment from the Carlyle Group, a private-equity giant. Dre and Iovine still own a controlling stake in the company.

Today, the Beats offices in Santa Monica are just across Cloverfield Boulevard from Universal Music. This makes it easy for Iovine to commute from his “day job” as the chairman of Interscope Geffen A&M, a merged label that is now a division of Universal. The bright, modern offices are run by Luke Wood, a former alt-rock guitarist, music-biz PR man and Interscope executive who crossed the street permanently in 2011 to become Beats’ chief operating officer.

Beats employs dozens of audio and electrical engineers, some of whom toil in a room filled with speakers and sound-dampening foam, measuring sound-wave curves while quickly switching between a Beats prototype and a competitor’s models. Around the corner, designers think up new color schemes and patterns for upcoming limited-edition headphones. A green-and-yellow pair destined for the Brazilian soccer star Neymar has a verse from Deuteronomy inscribed above one of the earpieces. Deus não vos deixará, nem vos desamparará, it reads–God will never abandon you, nor forsake you.

Beats customers will soon have one more painstakingly crafted product to consider, but if the company’s headphones are made to be seen, the Beats Music service will only be heard. For the past decade, Reznor, who once recorded for Interscope, has been tinkering with the potential for technology and social media to expand his audience–new ways to sell music, market concert tickets and draw fans deeper into his world. Since taking the title of chief creative officer of Beats Music in 2013, Reznor has been the arbiter of whether the UX–user experience–is working, much the way Dre initially established the bass-heavy sound of Beats headphones.

The app, which will come preloaded on some AT&T phones, offers Mad Lib–style options for exploring the extensive music catalog, which is built on the bones of a previous service, MOG, that Beats reportedly bought for about $14 million in 2012. A listener can, for example, tell the app that he or she is “in the car” with “my boo” and looking to “pre-party” to “old skool dance.” That particular combination of cues results in a playlist that includes Luscious Jackson’s “Don’t Look Back,” Isaac Hayes’ “Never Can Say Goodbye” and Prince’s “When You Were Mine.”

Ideally, Reznor says, users will never have to use the search function because Beats’ proprietary mix of software and programmed playlists will keep suggesting the right music for a particular moment. “It was a conscious decision really to keep [it] simple,” Reznor says. “Making it fun, making it joy-filled, taking this concept of the miracle of music showing up in your pocket.” In other words, Beats wants to become your music-obsessed friend who is always recommending great new albums.

Iovine and Beats Music CEO Ian Rogers, a veteran of several online music ventures, think people will pay to have a friend like that. “This whole thing of curation isn’t really tech companies’ game,” Iovine says. “All these services are built completely off algorithms. The songs they give you one after the other really have nothing to do with each other in the emotional sense.”

If Beats Music sticks to its pledge to be entirely subscription based, it will need roughly 5 million users to pull a profit after covering licensing costs, estimates Roger Entner, a telecom analyst with Recon Analytics. Industry observers say the curated experience of Beats Music could be attractive to a national audience that still heavily depends on the radio to find its music. “It has the potential to be the biggest thing since Spotify,” says Entner.

One thing is certain: Beats will be spending to make sure consumers know about the service. AT&T will also provide a massive marketing boost, since it will be collecting subscription fees directly from customers. “We know how to market things you’ve never heard of before,” boasts Iovine. “We know how to break Lady Gaga on $400,000 in every country in the world.”

It’s true: Lady Gaga, who signed to Interscope in 2007, has sold about 24 million copies of her first two albums worldwide. But her most recent release, November’s Artpop, has sold fewer than a million. An old-school record man like Iovine knows that even the brightest stars can fizzle. The only question is whether Beats Music will extend his hot streak or end it.

–With reporting by Noah Rayman 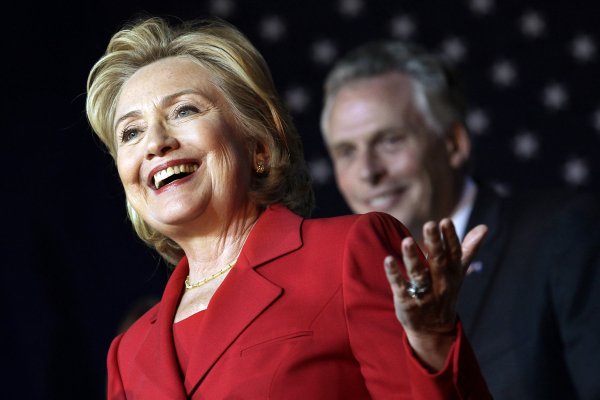 Can Anyone Stop Hillary?
Next Up: Editor's Pick