Coke Wants You to Wear This Huge Funnel Around Your Neck

Coca-Cola has a solution to our collective obsession with our smartphones that’s even more innovative than Google Glass: giant, Coke-branded funnels over our heads. The company “unveiled” the new product in an online video this week. In the ad, which refers to the offline world as “the thing that happens when you run out of battery,” people buried in their phones have a eureka moment when an absurd red funnel is placed on their heads and they’re forced to witness sunsets and look into other human beings’ eyes.

The ad’s a bit goofier than Coke’s typical heartwarming fare, like the spot featuring a Russian and an American astronaut bonding over soda in space that debuted during the Sochi Olympics. But the company may be trying to expand the appeal of its ads after a disappointing quarter in which soda sales in North America fell by 1 percent and global sales failed to reach estimates. Coke believes it can market its way out if its current problems, promising cut $1 billion in costs by 2016 and funneling much of the savings toward advertising. The company already spends more than $3 billion on advertising each year. 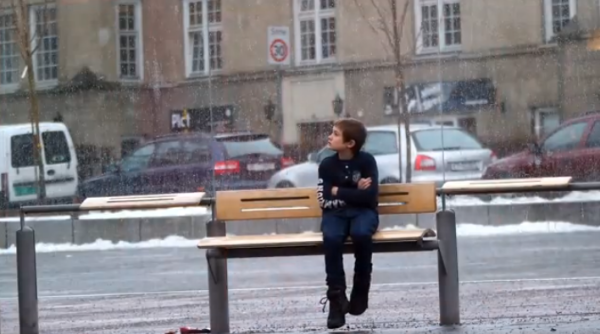