The Shaming of Monica: Why We Owe Her an Apology

Ask any child of the 1990s, and she remembers — vividly — when she first heard about the Monica Lewinsky scandal (as well as the particular sex acts involved).

I was 16, perched with a group of friends in the hallway of my high school, devouring the contents of the Starr report like a trashy romance novel. (He did what with a cigar?!) None of us was old enough to truly comprehend the complexities — or power dynamics — of a 22-year-old intern fellating the President of the United States. And yet we did know one thing: we didn’t like that raunchy Lewinsky girl. What kind of woman flashes her thong at the President, anyway?

Nearly two decades later, Lewinsky is still a punch line and a sly euphemism for oral sex. She reappears in the press this week by way of a 4,000-word Vanity Fair essay about the hellish aftermath of her “mutual relationship” with President Bill Clinton. She says she’s had trouble getting jobs. (Everyone knows her name, after all.) She turned down lucrative offers to tell all — because they “didn’t feel like the right thing to do” — and survived on loans from family and friends. If humiliation is indeed the most intense human emotion, as a new study found, then Lewinsky is my generation’s Hester Prynne. She had suicidal thoughts, and her mother feared that she would be “literally humiliated to death” (a consequence we now know is not so far-fetched in the Internet and social-media era).

The timing of Lewinsky’s essay, as we await a Hillary Clinton presidential run, is no doubt strategic, taking us back to an era that the Clintons would rather not revisit. But perhaps it also shows how far we’ve come. Does the media owe Monica Lewinsky a collective apology?

To look back on the specifics now is mind-blowing. The Wall Street Journal referred to Lewinsky — in print — as a “little tart.” New York magazine reported that as an adolescent, Lewinsky had spent two summers at fat camp, where she “paid particular attention to the boys.” (Code word: slut.) Maureen Dowd won a Pulitzer Prize for her coverage of Lewinsky, in which she called her a “ditzy, predatory White House intern” and “the girl who was too tubby to be in the high school ‘in’ crowd,” among other ugly caricatures. Fox News actually released a poll investigating whether the public thought Lewinsky was an “average girl” or a “young tramp looking for thrills.” Fifty-four percent rated her a tramp.

“It was a different time back then. There was no consciousness raised about slut-shaming. Bullying wasn’t even in the vernacular,” says Leora Tanenbaum, the author of Slut!, which first established the term slut-bashing (a precursor to slut-shaming) when it came out in 1999. “​People who were decisionmakers and influential writers were making comments about her hair and body. It was a textbook case of the sexual double standard.”

Indeed, it wasn’t just Bill Clinton who didn’t even grant Lewinsky the dignity of using her name when he finally, partially, admitted the affair. (She was “That Woman” — as in, “I didn’t have sexual relations with that woman.”) There were no websites like Jezebel back then, no feminist bloggers, no Women’s Media Center to call out sexism in the press. And so the media vilified her, painting her as that scary feminine trope: the crazy, emotional Single White Female — or, to borrow the phrase from the political sex scandal before her, “a little bit nutty and a little bit slutty.” “This is all sort of part of the water at the time, where the woman is the evil seductress — and the poor, weak man had no power to resist her,” says Jennifer Pozner, a media critic and the author of Reality Bites Back, about women and reality TV. “That’s how Monica Lewinsky entered the fray.”

In reality, it’s not actually that hard to imagine being in Lewinsky’s shoes. The thrill of the flirtation. The flattery of being wooed by a President. The naiveté about the consequences. The stupidity … of being 22.

“I doubt most people could survive being defined by the least advisable sexual encounter they’ve engaged in,” says the feminist writer Amanda Marcotte. “She was young and dumb, but it was consensual. He has more responsibility, being both married and older.”

And yet at the time, Lewinsky had few defenders, even among feminists — her identity, not just her behavior, systematically torn apart. In a column in TIME, Barbara Ehrenreich lamented that the days after the Monica Lewinsky scandal broke had been “The Week Feminists Got Laryngitis.” And when they did speak up, it wasn’t pretty: “My dental hygienist pointed out she had third-stage gum disease,” quipped Erica Jong. “If anything, it sounds like she put the moves on him,” said Backlash author Susan Faludi. “Even mainstream feminists, who you’d think would come out and say, ‘You know, here’s this poor young woman being exploited, let’s take her side,’ they’re not taking her side,” Katie Roiphe mused as part of a New York Observer roundtable with Jong and others held at the time that is once again making the rounds.

And indeed, that was part of the problem. Sure, Clinton was charming and charismatic. (“All of my women friends and I would be happy to have sex with Clinton and not talk about it,” New Yorker writer Patricia Marx joked at the time.) But he was also good for women at large. He supported reproductive rights. He put Ruth Bader Ginsburg on the Supreme Court. And then there was Hillary. So when Lewinsky asks now, “Where … were the feminists back then?” we know the answer. As the president of the Feminist Majority Foundation put it five months after the affair was revealed, “We’re trying to think of the bigger picture, think about what’s best for women.”

There’s very rarely sympathy for “the other woman.” Or, as Erica Jong tells me when asked if the reaction to Lewinsky would be any different today, “Blaming women is always in fashion.”

And yet the Lewinsky scandal would play out differently today. Remember, this was pre-sexting, pre-orchestrated sex tapes, pre-Paris Hilton. There was no social media, no feminist blogs, no Rachel Maddow. “No infrastructure,” as Pozner puts it, “to push back against the echo chamber.” Yes, there’s a long history of political sex scandals, but today we’re somewhat immune from the shock factor: we’d never remember where we were when one or another was first revealed. There have simply been too many to count.

She’s got it now. The problem: it’s too late. 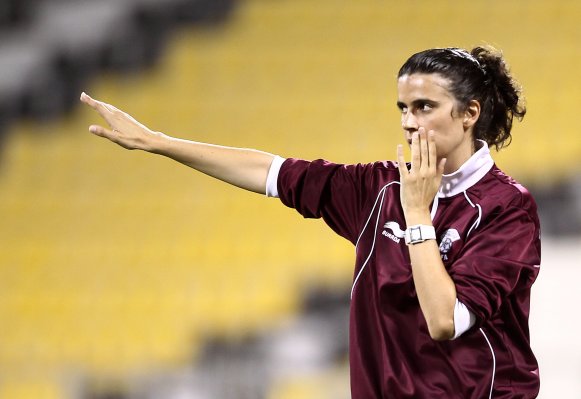