What Men Share on Social Media But Not With You

Here’s a scenario you might recognize if you’re a woman dating a social media butterfly: You’re sitting on the couch together silently watching TV. When you take a moment to peek at your Twitter feed, you see your significant other has been sharing a stream of personal thoughts about House of Cards with the Twitterverse—even though he hasn’t uttered a word to you.

It’s no surprise that men tend to be more tight-lipped than women about their thoughts and feelings, but social media is creating a haven for some men to express themselves online in ways they don’t in person—and never would have before. From a relationship perspective, that can be a good and bad thing. Women can now turn to social media to get more insight into what their partners think, but where’s the intimacy in that when those feelings are also being broadcast to hundreds of Facebook friends and thousands of Twitter followers?

Recent data from Pew Research Center suggests that social media is making its way into relationships more than ever, with 74% of couples surveyed saying the Internet has impacted their relationship in a good way. Women are more likely than men to use social media, with 71% of women participating compared with 62% of men, according to the latest report from Women’s Media Center. However, what psychologists and researchers find especially interesting is that, while women are equally willing to share the the thoughts they spew out into the digital ether with someone face to face, men are much less likely to do the same.

Eva Buechel, a PhD candidate at the University of Miami who has studied why people share content online, has found that men and women who experience social anxiety, and therefore have a greater need to express their negative emotions and seek support, are equally likely to maintain a blog or social media account. However, “while socially apprehensive females share equally across different communication channels—face to face or microblog—males seem to show a very strong preference for microblog,” Buechel says. Introverts also find it easier to share their thoughts online than in person.

Other research from Northwestern University shows that men are increasingly more likely to share their creative work, like writing, music, or art, online. Nearly two-thirds of men in a 2008 study said they post their work online, compared with only half of the women who reported posting.

Females, of course, are well versed at expressing their feelings. “Women usually have close and intimate friendships, which might make it easy to approach a friend when they need to talk to someone,” says Buechel. “Men have different relationships with their friends, and they might find it more difficult to approach someone in particular to talk to when they need someone to listen or comfort them.”

Such friendship dynamics can contribute to men feeling more apprehensive about expressing themselves when it comes to real, rather than digital, life. “When men are texting, emailing, or communicating through another technological channel, they feel less threatened and are more likely to share their thoughts and feelings because they don’t have to deal with the reaction from the other person in-person, in real-time,” says Dr. Seth Meyers, a Los Angeles psychologist.

That’s one reason Avidan Ackerson, 28, a software engineer in New York with three different Twitter accounts, tends to share more personal things on Twitter than he does on Facebook. “I don’t necessarily always want someone who knows me well to know things about me, but I want someone to know these things,” he says.

Ben*, 28, who works in commercial real estate finance in New York City and tweets as much as 50 times a day, has yet to reveal his Twitter handle to the woman he’s been dating for a month, even though he tweeted about their first date shortly after it happened. “It’s not something I am embarrassed to share, but it’s a level of intimacy we have not yet achieved in real life,” he says. And it will probably be months before they become Facebook friends.

“Connecting online offers men the illusion of security, even though it often causes frustration later among their dates who are wondering, ‘Why is he different and more closed when we’re actually together?’” Meyers says.

Though frustrating for women who prefer face to face communication with their mates, social media may offer a halfway point. “Men are not very good communicators,” says Michael Busby, 47, a system programmer and lecturer at Murray State University in Murray, Kentucky, and an avid blogger. “When we get frustrated, we really start to break down. There are times when [I get overwhelmed in the classroom], I start to stutter. I have to calm down. But a controlled environment encourages us to have more confidence.”

Jessica Riches, 23, a social media consultant in London says her boyfriend, who tweets constantly, is pretty good at communicating. But visiting his Twitter page and seeing everything from his day-to-day activities to his thoughts and feelings can make her feel closer to him as well. “I look at it more regularly [when] I miss him and wonder what he’s up to.”

Still, for a woman from Venus and a man from Mars, there’s something frustrating about a man’s willingness to communicate with thousands of people—some friends, some strangers—in a way he can’t seem to do with the person lying right next to him in bed. 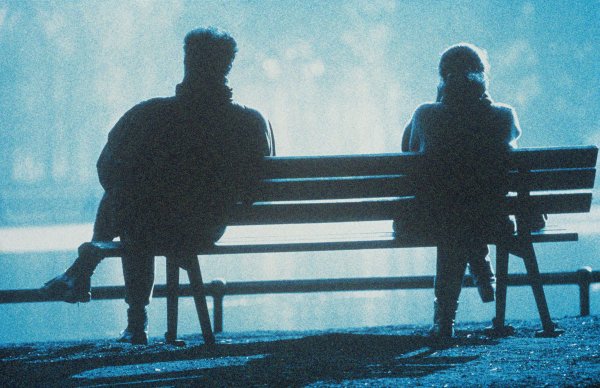