The Russian Stronghold in Ukraine Preparing to Fight the Revolution

A Ukrainian woman holds a Soviet flag during a rally in the industrial city of Donetsk, in eastern Ukraine, on Feb. 22, 2014
Alexander Khudoteply—AFP/Getty Images
By Simon Shuster

The busload of officers only began to feel safe when they entered the Crimean peninsula. Through the night on Friday, they drove the length of Ukraine from north to south, having abandoned the capital city of Kiev to the revolution. Along the way the protesters in several towns pelted their bus with eggs, rocks and, at one point, what looked to be blood before the retreating officers realized it was only ketchup. “People were screaming, cursing at us,” recalls one of the policemen, Vlad Roditelev.

Finally, on Saturday morning, the bus reached the refuge of Crimea, the only chunk of Ukraine where the revolution has failed to take hold. Connected to the mainland by two narrow passes, this huge peninsula on the Black Sea has long been a land apart, an island of Russian nationalism in a nation drifting toward Europe. One of its biggest cities, Sevastopol, is home to a Russian naval base that houses around 25,000 troops, and most Crimean residents identify themselves as Russians, not Ukrainians.

So when the forces of the revolution took over the national parliament on Friday, pledging to rid Ukraine of Russian influence and integrate with Europe, the people of Crimea panicked. Some began to form militias, others sent distress calls to the Kremlin. And if the officers of the Berkut riot police are now despised throughout the rest of the country for killing dozens of protesters in Kiev this week, they were welcomed in Crimea as heroes.

For Ukraine’s revolutionary leaders, that presents an urgent problem. In a matter of days, their sympathizers managed to seize nearly the entire country, including some of the most staunchly pro-Russian regions of eastern Ukraine. But they have made barely any headway on the Crimean peninsula. On the contrary, the revolution has given the ethnic Russian majority in Crimea their best chance ever to break away from Kiev’s rule and come back under the control of Russia. “An opportunity like this has never come along,” says Tatyana Yermakova, the head of the Russian Community of Sevastopol, a civil-society group in Crimea.

On Wednesday, just as the violence in Kiev was reaching its cadence, Yermakova sent an appeal to the Kremlin asking Russia to send in troops to “prevent a genocide of the Russian population of Crimea.” The revolution, she wrote in a missive to Russian President Vladimir Putin, is being carried out by mercenaries with funding from Europe and the United States “with only one goal in mind: the destruction of the Russian world.”

Though the Kremlin has not yet responded to her plea for help, Russia used a similar appeal as a pretext for the land invasion of South Ossetia, a breakaway region of Georgia, in 2008. That August, Russia claimed that the people of South Ossetia were at risk of genocide when the Georgian military tried to take control of the rebel region by force. Russia responded by sending in its tanks, and after a weeklong war, it seized a fifth of Georgia’s territory, including all of South Ossetia.

On Saturday afternoon in Crimea, around 3,000 ethnic Russians came out to appeal for the protection of Moscow at a demonstration in the main square of Sevastopol, a short walk from the warships of the Russian Black Sea Fleet. “There isn’t even any need for Russia to invade,” Yermakova, who organized the demonstration, told TIME on the square. “They are already right here.”

Earlier that day, a senior delegation of Russian diplomats arrived in Ukraine to assess their options. In the eastern city of Kharkiv, they met with about 3,000 local and municipal officials from the deposed government, all of them from the pro-Russian regions of eastern and southern Ukraine. The deposed President Viktor Yanukovych, who had fled to Kharkiv from Kiev earlier that day, did not attend. Together, pro-Russian Ukrainian officials and the Russian delegation passed a resolution denouncing the revolutionary leaders as “extremists and terrorists.”

Vadim Kolesnichenko, a member of parliament from Crimea and one of Ukraine’s most staunchly pro-Russian politicians, read out the resolution to the delegates. “The cohesion and security of Ukraine is under threat,” he said. “Five atomic power stations and 15 nuclear reactors have come under direct threat from extremists and terrorists.” As long as the revolutionaries refuse to lay down their arms and surrender government buildings, the local authorities in Crimea and eastern Ukraine will ignore all their decisions and “take responsibility for maintaining constitutional order on themselves.”

The document amounted to a secession; at the very least, it marked a total rejection of the revolutionary government’s legitimacy. Alexei Pushkov, the most senior Russian delegate at that summit, wrote on his Twitter feed: “There is not a gram of separatism at the summit in Kharkiv. The main point of the statements is that we do not intend to split up the country. We want to preserve it.” In his next post, he added, “A summit took place here of five [Ukrainian] regions against violence, chaos and collapse.”

The part of the summit’s resolution that will worry the West, however, was its call for citizens to form militias in Crimea and eastern Ukraine “in cooperation with the regional security structures.” On the eve of Saturday’s summit, Kolesnichenko, the Crimean lawmaker, suggested that such militias were needed to resist what he characterized as a “fascist rebellion prepared by Western instructors.” In an interview with Russia’s state-run paper of record on Friday, he posed a rhetorical question: “If I were to tell you that after the opposition comes to power … Nazi terrorist groups will appear on the border with Russia, would you believe me?”

Many of the people at the rally in Sevastopol were not just ready to believe. They were convinced of the imminent nationalist invasion. What scared them most were the right-wing political parties and militant groups that have played a role in Ukraine’s revolution. “What do you think they’re going to do with all those weapons they seized from police in Kiev? They’re going to come here and make war,” said Sergei Bochenko, who identified himself as the commander of a local militia group in Sevastopol called the Southern Russian Cossack Battalion.

In preparation, he said, his group of several hundred men had armed themselves with assault rifles and begun to train for battle. “There’s not a chance in hell we’re going to accept the rule of that fascist scum running around in Kiev with swastikas,” he said. That may be overstating the case. Nowhere in Ukraine has the uprising involved neo-Nazi groups, and no swastikas have appeared on the revolution’s insignia. But every one of the dozen or so people TIME spoke to in Sevastopol was certain that the revolt was run by fascists, most likely on the payroll of the U.S. State Department. That message has long been propagated in Russian state-run media, which millions of people in Crimea and eastern Ukraine rely on for information.

As the sun began to set over the rally in Sevastopol, word spread through the crowd of several thousand people that the bus full of officers had finally entered the city on their long drive back from Kiev. It carried about two dozen men, a mix of Interior Ministry guards and Berkut riot troops, who had been called to the capital in December to fight the revolutionaries. As they pulled onto the square, the crowd surged forward and surrounded them, carrying red carnations, pushing boxes of cookies and cakes toward them, holding babies in the air and cheering.

Either out of fear or shame, the uniformed officers who emerged from the bus were not yet ready to remove the balaclavas from their faces. But even though only their eyes were visible, their friends, wives and mothers were able to recognize them, and the crowd began to chant in celebration, “The Berkut are heroes! Glory to the heroes!” Still filthy and exhausted from the clashes in Kiev, the men found it hard to accept such a welcome. They were returning as failures, after all, from their mission to stop the revolt. So when Marina Pshenichnaya found her nephew Denis among the troops, he leaned into her embrace and said, “I’m sorry. We’re sorry we couldn’t protect you.”

It wasn’t really their fault. Only the previous day, the policeman Roditelev, a 21-year-old native of Sevastopol, was part of the detachment guarding the Interior Ministry in Kiev, one of the last government buildings in the capital still under government control on Friday. But as night fell, a final set of orders came down from their commanding officers: Abandon your posts. The armory inside the building was still full of pistols and assault rifles at the time. “And we just left it all behind,” Roditelev says. “Now the fascists have it, and they’re not going to stop.” His first aim upon returning home was to take a bath, the first in many weeks, and spend some time with his parents. After that, he says, he plans to join up with one of the militia groups and prepare for the arrival of the revolutionary forces. “We just have to defend our own city now,” he says. “The country is lost.” Russia, he feels certain, would come to help them. 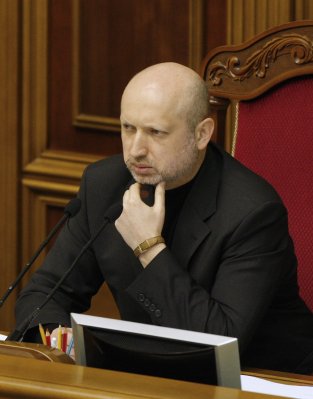