May 9 With Swingers and Made, Jon Favreau built his reputation as an indie filmmaker who could tell a small story with humor and heart. But it turned out he also had a talent for directing big-budget fare, first with Elf and then the Iron Man franchise. But by the time he wrapped Iron Man 2 and 2011’s Cowboys & Aliens, he was ready for a break–a big one. He went into talks to direct Iron Man 3 but couldn’t imagine putting himself through another multiyear production process, balancing the demands of studios, producers and stars.

Instead, Favreau wrote Chef, a charming metaphor of a movie about a culinary whiz who gets bored cooking dishes he dreamed up years ago for a restaurant owner who won’t let him innovate. As the titular cook, Favreau packs his knives, walks out and reinvents himself as the owner of a food truck. His hot new dish: Cuban sandwiches, grilled up with the help of his sous-chef (John Leguizamo) and 10-year-old son (Emjay Anthony), who promotes their mobile eatery with deft manipulation of a Twitter feed.

“It was nice to work on a little movie like this again, where I have so many responsibilities between writing and directing and acting, and you live and die by your own talents,” Favreau says. “I missed the feeling of doing something small and personal, where I wouldn’t have to explain my vision to anyone but the people I was collaborating with.”

Among those collaborators were his Iron Man co-stars Scarlett Johansson and Robert Downey Jr. as well as Dustin Hoffman, Sofia Vergara and Bobby Cannavale. “Everybody comes in and just steals every scene from me,” Favreau says. “Downey just comes in and hits it out of the park.”

Noncinematic collaborators included Roy Choi, a Los Angeles–based chef who sent Favreau to culinary school for a week and allowed the director to apprentice in his restaurants and pioneering Kogi food truck. The result is a hipster-dad version of Babette’s Feast, one of the many films Favreau turned to for inspiration.

“I was really concerned with getting the accuracy of the food world right,” he says. “Eat Drink Man Woman, Ang Lee’s third film, had some exquisite food photography. Jiro Dreams of Sushi made my 11-year-old son want to try omakase sushi–and he’s a picky eater. There’s something about food that is just magical on film.” 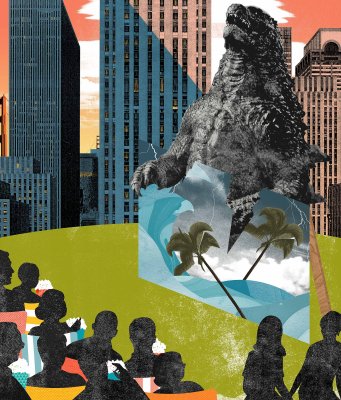 Godzilla, Into the Storm and More Summer Cli-Fi Thrillers
Next Up: Editor's Pick