The Smartphone App Wars Are Over, and Apple Won

Every month or two, I perform a little ritual: I remove the SIM card from whatever phone I’m using at the moment and pop it into a different model. My goal is to get plenty of hands-on experience with all the major mobile platforms — a mandatory qualification for anyone in my line of work, as far as I’m concerned.

Whenever I land back on Android, as I did when I switched from my iPhone 5 to an HTC One this week, I’m reminded of the things I like about Google’s mobile operating system. It’s far more customizable than iOS, letting me do things such as opting for a third-party keyboard like Swype. It’s neatly integrated with Google services such as Gmail and Google Maps. Its overall level of polish, once so crude, is now at least in the same ZIP code as iOS.

Actually depending on Android to do real work reminds me that even though both iOS and Android have over a million apps, they haven’t reached parity when it comes to the ones I’m most interested in using. Leaving iOS behind means doing without Secret and Facebook’s Paper, for instance. And racing Anki’s amazing little cars is no longer an option.

In some cases, an Android app is available, but lacks key features: The one for TiVo, for instance, lets you manage your DVR’s recordings but doesn’t, like, let you watch them. In other instances, an Android version is feature-complete but not as elegant as its iOS counterpart, such as with Instagram, which doesn’t let you pinch to zoom in and out of an image you’re posting,

Now, it’s rare for the creators of a significant app to simply ignore Android altogether. Secret, for example, is apparently trying to hire someone to work on an Android version even as we speak, judging from its job listings. But for many companies, the Android version is what you get to work on after you’ve shipped the iOS one, leaving Google’s ecosystem in a mode of permanent catch-up. Even though about 80 percent of new smartphones shipped run Android, giving apps written for it a vastly larger theoretical customer base.

It wasn’t supposed to be this way. Pundits such as Business Insider’s Henry Blodget continue to argue that Android’s overwhelming market share will inevitably lead to it becoming the dominant app platform — just as Windows’ overwhelming market share led developers of PC software to focus on it and give short shrift to the Mac, thereby helping Microsoft and hurting Apple.

Blodget has been making this case since at least April of 2011, when he said that Apple fans should be “scared to death” of Android’s surging market share and the likelihood that it would lead to developers favoring Google’s ecosystem. Venture capitalist Fred Wilson blogged similar sentiments at the same time.

Since then, Android’s growing popularity has clearly had a positive effect on the quantity and quality of goods in Google’s app market. Here’s the thing, though: Android’s gain has not been iOS’s loss. And over the last couple of years, we seem to have reached a state of equilibrium:

(Sorry, owners of Windows Phones and BlackBerrys: Your situations are worth examining, too, but I’m not going to do it in this particular piece.)

The current situation seems to me to be a largely happy one for both iOS and Android users. They’re two great platforms, each with some unique strengths and access to vast quantities of apps. But it’s not the scenario long predicted by the market share ūber alles crowd. And there aren’t even any isolated incidents that should set off little alarms in Apple’s head — a hot app or a big company announcing that it’s decided to go Android-first.

So it isn’t rash to declare that we’ve reached the point where the reasonable conclusion is that market share alone is not the overriding factor. A few factors which help explain why iOS keeps its app edge come to mind:

As far as I can divine, all of these points play a part in determining the relative health of the iOS and Android platforms. Together, they matter more than the number of devices each operating system has in the field.

Which leads me to wonder: If 80 percent market share isn’t enough to make Android the 800-pound gorilla of mobile app development, what percentage would be? Eighty-five percent? Ninety percent?

It would be nutty, of course, to argue that Android’s failure to overcome the iOS software advantage means that Apple has nothing to be paranoid about on the app front. But maybe the big scary threat isn’t Android. Maybe it’s the same one that eventually made Windows less of an inevitable fact of life on the desktop: As cloud-based services got more and more sophisticated, and the business models behind them improved, the apps available for any particular platform stopped mattering that much. Facebook, after all, is Facebook whether you’re using it on a Windows machine, a Mac or a Chromebook.

Though that hasn’t happened yet with smartphones, it probably will — not in the next year or two, but eventually. Google is as comfortable writing web services as any company on the planet, so it would presumably be O.K.

How Apple would contend with a post-app era isn’t so obvious — but if I were part of the company’s brain trust, I’d be secretly formulating a game plan right now. 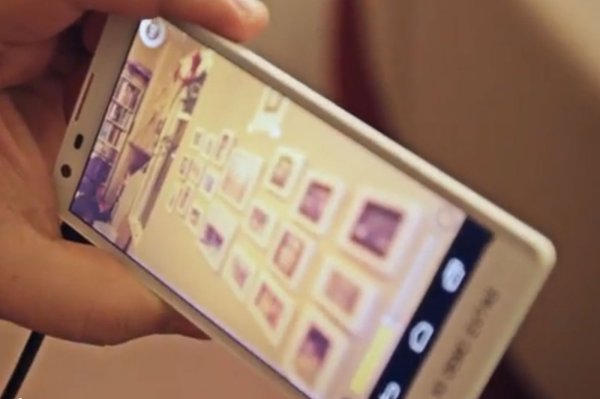 Google Introduces Phone With 3-D Sensors
Next Up: Editor's Pick