Photograph by Alex Majoli—Magnum for TIME
By Stephan Faris / Rome

Less than a month after Matteo Renzi was sworn in on Feb. 22 as Italy’s Prime Minister—at 39, he is the youngest in the country’s history—he traveled to Berlin to meet his most formidable European partner, the German Chancellor Angela Merkel. Italy’s creaking economy was at the top of the agenda. Burdened with record levels of debt—only Greece has a bigger load in the euro zone—the country is struggling to recover from its longest postwar recession. Aware of Merkel’s belief in strict budgetary discipline, Renzi was at pains to reassure her that his plans to revive the Italian economy would not involve a splurge in spending. In a toast at a dinner with the German leader, he said he would follow the example of the Renaissance sculptor Michelangelo, who, when he began working on his statue of David, took a block of marble and chipped away “whatever was in excess.”

The moment was classic Renzi: bold, inspiring, elegantly expressed—but short on specifics. “That’s how I see Italy,” he tells Time, in his first interview with a non-Italian news organization since becoming Premier. “If we cut away all the things that are in excess, bureaucratically, fiscally, something will come out that’s more beautiful than the David,” he says, lounging across one of the yellow armchairs in his palatial office in central Rome.

“More beautiful than the David, let’s not exaggerate,” he adds, catching himself. “As beautiful as the David.”

It is hard to reconcile the imagery with the desperate state of the nation’s finances—and its politics. Italy has whipped through three Prime Ministers in less than 21⁄2 years as the political system crumpled under the pressure of more than a decade of economic stagnation, the global financial crisis and market-demanded austerity. The country has tried the business tycoon (Silvio Berlusconi), the professorial technocrat (Mario Monti), and the veteran political insider (Enrico Letta), but none has been able to deliver the reforms needed to put Italy on the path to sustainable growth. That isn’t just troubling for Italy. As Europe’s fourth largest economy, its well-being is critical for the recovery of the wider continent as it attempts to step out of the shadow of the sovereign-debt storm that threatened to splinter the euro-zone currency union in the wake of the financial crisis.

Now Italy’s fate is in the hands of a former mayor of Florence, whose greatest administrative accomplishment before a parliamentary maneuver made him Prime Minister was the transformation of the area around Florence’s cathedral into a pedestrian zone. What he does possess is an appetite for risk—the willingness, he says, to shake up a political and administrative system out of step with Italy’s constrained economic reality. “Italy will never be a normal country,” says Renzi. “There is in the DNA of the Italians a bit of madness, which in the overwhelming majority of cases is positive. It’s the masterpieces of art. It’s the food, fashion, everything that makes Italy great in the world.

The problem, in Renzi’s view, is that his predecessors approached the effort to reform the country as a game of pick-up sticks, in which players vie with one another to extract sticks from a pile without disturbing any of the others. “Unlike those who think it’s enough to pull out one piece at a time, we’ll put in all our courage, all our energy, all our grit, and we’ll try to overturn the system altogether,” he says.

A Running Start
Given Renzi’s pace during his first two months in office, few would question his willingness to try. He announced his intention to abolish the Senate, the 320-member upper house of the Italian Parliament, before he even took office. In a speech to the chamber as it prepared to provide him with the vote of confidence he needed to form a government, he proposed a smaller, less powerful body. It’s a measure he says will make Italy easier to govern.

One of his first acts in office was the introduction of a tax cut of 80 euros ($110) a month for some 10 million middle- and lower-class Italians, a move intended to shore up public support for less popular reforms. According to Pier Paolo Baretta, undersecretary of finance in Renzi’s government, the tax cuts will be offset by lower debt-financing costs, spending cuts and increased tax revenues as companies across the country receive long-overdue payments from the government. “These three items allow us to be covered,” Baretta told Bloomberg.

The critical question is whether Renzi can follow up his populist tax cut with the overhaul of the bureaucracy and the spending reductions required to balance the nation’s books. Unemployment is still high—over 40% of Italy’s young job seekers are out of work. He also faces a challenge in reforming the country’s labor market.

On April 23, Renzi pushed legislation through the Chamber of Deputies, the lower house of Parliament, that makes it easier for companies to employ workers on temporary contracts. The measure, which needs to be approved by the Senate before it becomes law, is the first step, Renzi says, in a broad restructuring that would reduce the number of articles in Italy’s byzantine labor code from 2,100 to something close to 50.

But the policy pits Renzi’s administration against Italy’s powerful trade unions. Renzi has not been shy to publicly criticize organized labor. Speaking to the Italian daily Corriere della Sera on May 4, he said the unions “can’t just carry on as before while Italy suffers.” Vincenzo Scudiere, the second in command at CGIL, Italy’s largest union, thinks Renzi’s approach is misguided. “If there’s no work, changing the rules isn’t worth much,” he says. “The state should make more public investments and encourage private investment.”

While Renzi’s ambition is obvious, what’s less clear is whether he has what it takes to succeed. Italians have greeted his announcements with both hope and a degree of skepticism. He has long been among the country’s most popular politicians. And although his party has gained in popularity since he took office—new polls suggest it could end up with 32% of the vote in the upcoming European elections, up from 30% when he took office—the rise in support has been limited as many voters reserve judgment on their new leader.

Perhaps the biggest challenge facing Renzi is reforming the country’s famous bureaucracy, a tangle of national, regional, provincial and municipal governments and jurisdictions. It’s not enough to push bills through Parliament; Renzi needs to ensure the new laws are implemented by administrators around the country. “It’s incredible how many laws are made in Italy and then ignored,” says Giacomo Vaciago, a professor of economics at Milan’s Catholic University of the Sacred Heart. “Their entries in the official record are a memory, testimonies to past intentions like tombstones in a cemetery.”

Change—Without a Mandate
Media-savvy and blessed with a knack for shaping the political narrative, Renzi has been compared to the young Tony Blair. But unlike the British leader, who swept into office on the back of a historic landslide, Renzi came to power without winning a single vote, displacing his predecessor, Letta, after an internal party battle. It was a move Renzi had repeatedly promised not to make, and it deprives him of the ability to claim that his reform program is backed by a popular mandate. “This is a Parliament that wasn’t voted in to do the things that Renzi wants,” says Giuseppe Civati, a former ally of the Prime Minister who, though he belongs to the same party, has become his most outspoken critic. “He can’t say, ‘I was elected to do this.’ Nobody voted for him.”

Moreover, the parliamentary majority on which Renzi depends is the same fractious right-left coalition that initially supported the previous government. Many of the lawmakers in Renzi’s party owe their allegiance to his rivals or don’t agree with him about what needs to be done. Political flash points include such ideologically sensitive issues as changes to the labor laws or his push for electoral reforms to ensure more stable governments by raising the threshold a party or coalition would need to claim victory and providing for runoffs to throw up a clear winner. “The majority of the people who are sitting in Parliament don’t want to pass an electoral law that Renzi can use to call early elections,” says Roberto D’Alimonte, a professor of political science at Rome’s LUISS University who has advised Renzi on electoral reform. “They don’t want to give him the weapon that he can use to kill them.”

As mayor of Florence, Renzi caught his opponents off guard by moving quickly. Several of his predecessors at city hall had conducted consultations over how best to turn the area around the cathedral into a pedestrian zone. Renzi had a different approach; he simply banned cars overnight. “He doesn’t go and first get consensus,” says Silvia Ognibene, co-author of Matteo the Conqueror, a favorable biography of Renzi. “He just does it. And then if there are problems, he says, ‘Let’s sit down and find a solution.'” He used this method to privatize the city’s bus service despite union opposition. But he proved less adept at executing longer-term projects. Plans to build a new stadium for the local team and an underpass for high-speed trains never came to fruition. “He’s a 100-m sprinter, but in the marathon he risks losing,” says Ognibene.

Renzi’s advantage is that Italy has few other choices. The political bloodletting of the past three years has left him with no obvious challenger. And much of the politically unpopular work of reform has already been done. Monti introduced some much needed but unpopular tax hikes and pension cuts. Letta stared down Berlusconi, split the media mogul’s party, ousted him from the Senate and robbed him of his ability to bring down the government. Renzi is also fortunate to have become Prime Minister just months after the Italian economy expanded for the first time since 2011, registering positive growth in the last quarter of 2013.

Against this backdrop, Renzi has stressed the need for Italy to change for its own sake, resisting the temptation to justify unpopular reforms by blaming them on Brussels—the tactic adopted by his predecessors. The European elections in May will show whether the country agrees with him. 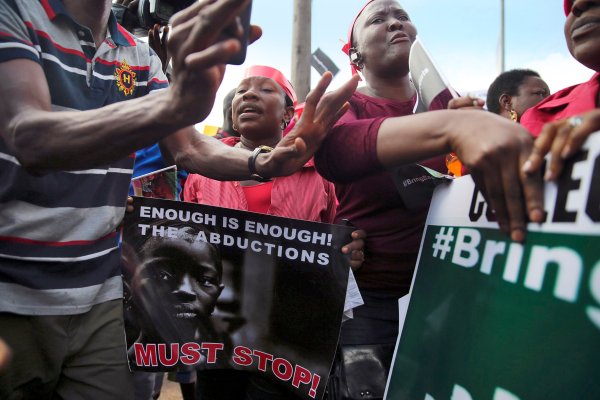 Alexis Okeowo: Beyond Nigeria
Next Up: Editor's Pick