Held back Many of the residents of this slum in India’s capital, New Delhi, are children living in extreme poverty and unhealthy conditions
Mohamed Hossam—Anadolu Agency/Getty Images
By Michael Schuman

Welfare helps alleviate poverty. But growth can end it. Asia’s example over the past half-century teaches that there are two critical ways to raise incomes: create jobs—and create more jobs. And the way to do that is to boost economic growth. When nations like China set in place the market-friendly policies to supercharge their growth rates, poverty melted away. In 1981, figures the World Bank, about 52% of the population of the developing world lived on less than $1.25 a day. By 2008 that share had shrunk to 22%, owing largely to gains made in Asia.

That plunge in poverty levels is truly one of the greatest achievements in human history. But it isn’t enough. The International Monetary Fund recently stated that nearly all economies—advanced and emerging—suffered a widening gap between rich and poor in the past three decades. Worsening inequality slows the pace of growth and heightens economic instability.

The causes for rising inequality have been the subject of a rancorous debate among economists, politicians and activists. Globalization has been blamed for creating an international labor market that heightened competition for jobs and shifted power to employers. Incestuous corporate governance is attacked for lavishing largesse on managers over workers, and unfair tax policies fingered for favoring big earners. The most important challenge facing the world’s economic policymakers today—and the big topic at this month’s World Economic Forum in Manila—is reversing this disheartening trend.

First, we must purge our minds of ideological baggage. Conservatives are committed to the idea that wealth created at the top “trickles down” to everybody even though a growing mountain of evidence tells us that simply doesn’t work in the real world. On the other side of the spectrum, too many people believe what is good for business—free-trade agreements, deregulation—is bad for the little guy. The answer lies in the middle: promoting business-friendly policies that unleash growth while, at the same time, taking steps to ensure the benefits of that growth are spread more widely and equitably.

Education is key. To get workers’ paychecks up, they have to possess better skills, yet many societies are not doing enough to improve schools and teachers and bolster job training. Just as the U.S. requires a skilled workforce more than ever before—to maintain its edge in innovation over rising challengers like China—policy is heading in the opposite direction. Public expenditure per student in the U.S. in fiscal 2011 dropped for the first time since that statistic has been kept. Some American lawmakers advocate measures that would increase the financial burden of going to college for many families. Nothing could be more counterproductive. Enhancing access to good education isn’t just a matter of more money, however, but also how we spend that money. In a recent report, the Organisation for Economic Co-operation and Development recommended boosting investment in the early years of education, like preschool, since that improves a child’s academic performance over his or her entire career.

We also must restore performance-based pay. The idea that people should benefit from their hard work is a cardinal tenet of capitalism, but there is ample evidence that it hasn’t held true for quite a while. Even though the average worker has become much more productive in recent decades, wages have not kept pace. The International Labor Organization (ILO) has shown that the share of wages in global GDP has decreased, meaning that the regular worker isn’t gaining as he or she should from economic growth.

The ILO recommends giving workers more power to bargain collectively so they can fight for their fair share of corporate profits. Maybe we should also consider altering the way we tax capital gains, by decreasing the rate in stages the longer the asset is held. That might encourage investors to hold shares for extended periods, and perhaps encourage them to foster the talent beneficial to their companies’ long-term prospects.

If the major achievement of the 20th century was reducing poverty, the big story of the 21st will be making sure those gains don’t go to waste. Global prosperity depends on more than lifting people out of destitution. It requires that they thrive. 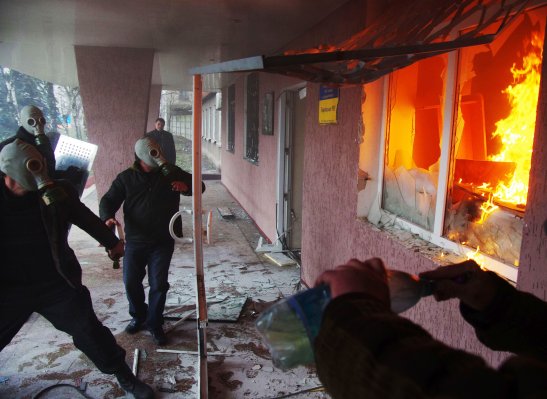 Russia's Game in Ukraine
Next Up: Editor's Pick