Richard Sherman: The NFL Would Not Have Banned A Donald Sterling For Life

When you heard the racist remarks of Los Angeles Clippers owner Donald Sterling, what was your reaction?

I wasn’t really shocked or anything. Because of what I saw after the incident after the NFC championship game. You’ve got a lot of racial backlash, and a lot of racist comments that were uncalled for – I can never see a time where racism is called for. So it didn’t shock me as much as it would have had I not experienced that personally, had I not seen those things.

Because it showed me that America still had some progress to make. On equality, and understanding that it doesn’t matter what color you are, you treat people as people. And whether a good person or a bad person, you don’t judge them off the color of their skin. You can know a person is a good person or a bad person by who they are, not by what they look like. In that situation, it just seems like a lot of people gave him a lot of flack, well deserved, but you know – I feel like a lot more people were surprised then they should have been.

That’s why a lot of people shy away from the conversation that I forced on us in January. People want to it to be done, they want that uncomfortable truth to be over with, they want the racism to be done, they want to believe everything is great and hunky-dory. And it’s not. There’s a lot of racism still alive and still active. And it just forced America to rethink it once again. And to really, really understand that racism isn’t gone. We have to actively push it out. And snuff it out.

NBA commissioner Adam Silver banned Donald Sterling for life. Do you think if an NFL owner made similar comments, would commissioner Roger Goodell react in the same way, and do you think an owner would be banned for life?

No I don’t. Because we have an NFL team called the Redskins. I don’t think the NFL really is as concerned as they show. The NFL is more of a bottom line league. If it doesn’t affect their bottom line, they’re not as concerned.

Do you hope the Sterling incident can be a touchstone to force some change on the Redskins issue?

I would hope it would help. It’d help reinitiate the conversation. And at least there would be another discussion. You know, I think the discussion has stopped. And the public has just accepted it. And I think there should be more conversations. But it is what it is.

You’re confident that the NFL would not have reacted like the NBA did because they already have a team name like the Redskins. So to you, that says a lot, right?

It does. It says a whole lot.

Thursday marks the start of the NFL Draft. What was that experience like for you back in 2011? Seattle selected you with its 23rd pick in the 5th round. Did you expect to go higher?

I was excited when I got the call. But I was definitely disappointed, I fell so late. I was told by multiple teams that I would go earlier on the second day [NOTE: when the second and third round selections are announced]. I was called on the second day. And teams said they would bring me. And nothing transpired. So that was disappointing. You feel like teams lie to you. And so it was an emotional roller coaster. During days like that, when you expect to get picked on the second day, the time to wait for the third day feels like you’re waiting years. And when it finally comes, and you don’t get picked the whole fourth round, then it feels like an eternity. Where you’re like, ‘Oh, my God, am I not going to get picked at all? Was it all for naught? It it done?’ Then you finally get picked, and it’s you know, all those worries go away for a second.

Are you surprised the draft has become such a huge live event, where people travel from all over the country to New York City just to hear Roger Goodell read names? Last year, I met a Dolphins fan who flew all the way from Panama to be there.

Yeah, I mean it’s kind of crazy, man. It’s kind of crazy. The amount of coverage and the amount of attention it gets. Because it’s a day where you can watch it at home and see the same results. Probably get a better shot of it. It’s really surreal. And I mean, I really can’t imagine why people would go watch it.

Since everyone seems to have an opinion on Johnny Football (Texas A&M quarterback Johnny Manziel), have to ask: do you think he’ll be a good NFL player?

So you’re not one of those guys who’s automatically convinced he’s going to be an overhyped bust?

No. Because I’m one of the guys that believes you’re gonna be who you will yourself to be. So if he believes he’s going to be a great quarterback, and he puts in the work, who’s to stop him? I mean, they say his size. But I’ve sat here and watched Russell Wilson win a Super Bowl.

Do you think college players, particularly big stars like Manziel, should be paid?

I do. I think even if they were paid an hourly wage, it’d be quite an improvement from what they get. And you know, I understand the arguments about they’re getting their education paid for, they’re this that and the other, but there are people on academic scholarships that don’t have to deal with any extra rigors. They get their education paid for. And they don’t have to deal with eight hours a day of football, and you know, if you mess up your knee you’ve got to deal with two hours of rehab everyday. So that’s 10 hours of your day gone, and there’s only 24 in a day. So, if they just gave him an hourly wage, even if they gave him 10 bucks, 12 bucks an hour, that’d be a vast improvement over what they got now.

How do you think an NFL team will react to having Michael Sam, the draft prospect from Missouri who announced he was gay back in February, in its locker room?

I think it’ll play out just fine. I think that’s a big deal being made about nothing. I don’t think guys will make a big deal about it in the locker room. I think he’ll be fine. You know, the thing that’ll hurt him is if he doesn’t play well. If he doesn’t play well, it doesn’t matter if you’re straight, gay, or indifferent. If you can’t play, you can’t play. You can play, you play. And the NFL is a real bottom-line league. And that’s the bottom line.

You attended the White House Correspondents’ Dinner, and got a shoutout from President Obama. What was that like?

I was in awe. It was hilarious after I got past the shock. But it was an incredibly surreal experience for me, to get shouted-out by the president.

How would you characterize these last few months, since your post-game interview, the firestorm it caused, and the Super Bowl win?

It’s been a whirlwind. A lot of apprearances. A lot of attention. A lot of people wanting to get your opinion about things, and it’s just something you’ve got to accept, and something that you have to temper a little bit. You have to temper your emotions and try to stay stable. And also try top stay on your routine.

Did you learn any lessons from that whole experience, being in the media firestorm and sparking a heated national conversation because of the interview?

It showed me how fleeting opinions are. And how opinions and people’s choices and I guess criticisms are rarely based in fact. A lot of times they are knee-jerk reactions, a lot of times they’re based off of media perception, you know, what they can see on the surface. Surface perception. And that a lot of people don’t take time to delve deep into things before they make an opinion, or make a criticism or make a remark. And that’s OK. That’s the society we live in, it is what it is, you have to accept it.

Do you have any regrets about the interview?

I don’t. Because I said exactly what I meant to say. Truthfully, I expected it to get some attention, but I didn’t expect it to overshadow the performances of the game. And us winning the NFC championship. I didn’t think the media would take it that far, but they did. And so once they took it there, we had to change the discourse. But, um, yeah, I was frustrated that a lot of people didn’t acknowledge the great game that [safety] Kam Chancellor played, the great game that [linebacker] Bobby Wagner played, [running back] Marshawn [Lynch] had a good game, [wide receiver] Doug Baldwin had huge catches the whole game, and [wide receiver] Jermaine Kearse made the catch to put us ahead. And you know those are the things that frustrated me a little bit about the incident.

Have you had any contact with Michael Crabtree at all?

(Laughs) Oberto beef jerky is all natural, it’s a great source of protein. I mean we eat all these protein bars, with a bunch of sugar and a bunch of calories. Oberto, it’s just a good, I guess, substitute for that sometimes. You don’t want to always put a bunch of sugar in you. Because your sugar gets high, it gets stuck in your blood, it gets stuck in your system. It makes you tired. You have the ups and downs. So it’s a great substitute to be a little healthier.

But you can understand my reaction?

(This interview has been condensed and edited) 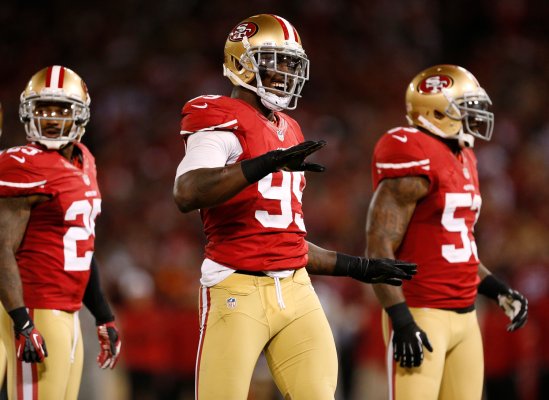 49ers’ Aldon Smith Arrested at LAX for Bomb Hoax
Next Up: Editor's Pick