Alan Greenspan would be amused, if not proud of Federal Reserve chair Janet Yellen’s testimony before Congress Wednesday about the state of the economy. The Dow had opened on the frothy side, up 75 points in the opening hour, but by the time Yellen’s words had been digested like the morning’s cronut, the DJIA was flat again.

Greenspan used to flummox the Street and Fed watchers has his own distinct vocabulary that tried to neutralize, if not paralyze, the market when he testified before Congress. Yellen is the complete opposite: She makes a point of being entirely comprehensible and what she said today is that things are pretty darn okay, America. “With the harsh winter behind us, many recent indicators suggest that a rebound in spending and production is already under way, putting the overall economy on track for solid growth in the current quarter,” she said.

But things are not okay enough to change the current policy of low short-term interest rates, even as the Fed ratchets down its purchases of mortgage debt designed to accommodate growth. Yellen is still concerned about the slowing housing market, which is a drag on near term growth and, in the long-term, the historically low labor participation rate. It is the Fed’s mission to maximize employment while containing inflation. “Looking ahead, I expect that economic activity will expand at a somewhat faster pace this year than it did last year, that the unemployment rate will continue to decline gradually, and that inflation will begin to move up toward 2 percent,” she said.

Housing has been slowed by rising interest rates and lagging household formations, even though rates are still low by historical measures. The lagging number of household formations, Yellen said, stems from the fact that kids coming out of college are weighed down by student debt and end up back with their parents. “As the job market strengthens and economy strengthens, we will see household formations will pick up,” she said in questioning before the Joint Economic Committee, and to the relief of many boomerang parents around the country no doubt.

A number of her questioners cited a deep-seated concern about inflation, which had been fueled by economist Allan H. Meltzer in a Wall Street Journal column this morning warning that higher inflation was unavoidable given the massive amount of liquidity the Fed has injected into the economy. Yellen wasn’t taking the bait. “We have the will, the tools and determination to remove monetary accommodation to avoid inflation,” she said. Yellen noted that she and other Fed staffers remember the inflationary late 1970s all too well—interest rates topped 20%—and weren’t about to repeat history.

One reason Yellen is a bit sanguine about inflation is that economic growth should be putting upward pressure on wages, for instance, which would then chase prices higher. That hasn’t happened, and one reason is that, while the unemployment rate dropped sharply last month, a half a million people dropped out of the labor force. Yellen noted that the reasons behind the drop in the labor participation rate aren’t fully known. It could be that more people are going back to school, boomers are dropping out, or something else.

She’ll look into it. But she again saw economic expansion as the solution to the problem. It generally is. Only in Yellen’s Q&A session with Congress did she give the Street anything to go on. Having signaled she’s sticking to the previously announced policy on interest rates, which favors stocks over bonds, she also remarked that she didn’t see any big issues in asset prices. “There are pockets where we could see misvaluations, in smaller cap stocks. But overall, the broad metrics don’t suggest we are in bubble territory,” she said. In other words, as you were Wall Street. The bulls quickly got back to work, sending the Dow higher before lunch. 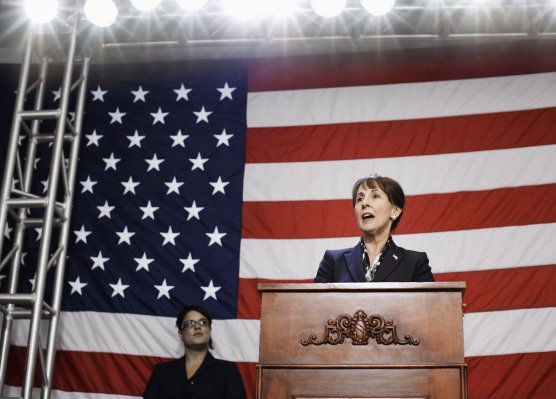 5 Things Politicians Must Stop Saying
Next Up: Editor's Pick