Synthetic Drugs confiscated, held and photographed at the D.E.A. Special Testing and Research Laboratory in Dulles, Va. on Jan. 6, 2014.
Jamie Chung for TIME
By Dan Kedmey

Federal agents raided hundreds of homes, warehouses and smoke shops early Wednesday as part of a nationwide crackdown on the synthetic drug trade.

Agents have fanned out across cities in 29 states, serving nearly 200 search warrants to synthetic drug makers and sellers. According to the DEA, they have arrested more than 150 suspects and seized hundreds of thousands of packets of designer drugs.

“Many who manufacture, distribute and sell these dangerous synthetic drugs found out first hand today that DEA will target, find and prosecute those who have committed these crimes,” said DEA Administrator Michele M. Leonhart.

The DEA said it had also seized at least $20 million in cash and assets. Investigators say the proceeds from the trade often flow to countries in the Middle East, including Yemen, Jordan, Syria and Lebanon.

The largest sting operation focused on Alabama, and included operations in Florida and New Mexico, according to the AP.

Wednesday’s raid marks the second phase of an ongoing federal crackdown on synthetic drugs, dubbed Project Synergy, which began in December, 2012 and resulted in 277 arrests.

Drug enforcement officials warn that the drugs, marketed as “bath salts,” “spice,” or “molly,” can be laced with illegal chemicals that cause symptoms such as paranoia, vomiting and organ damage. In 2013, poison centers reported 1,821 calls related to exposure to synthetic marijuana.

Synthetic marijuana is not listed as an illegal drug, so vendors can sell it without fear of legal repercussions, as TIME reported in an April cover story on the dramatic rise of synthetic pot’s popularity. 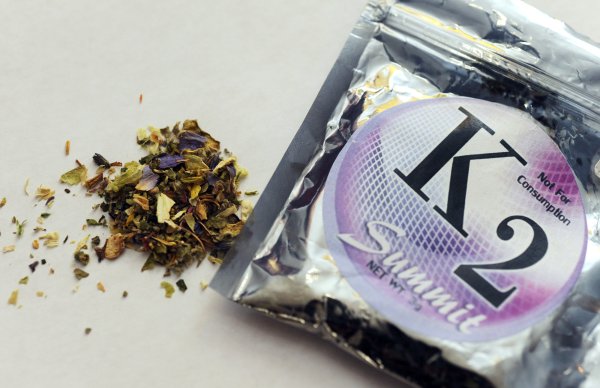 Nearly 120 People Overdose on Synthetic Pot
Next Up: Editor's Pick