Depending on Who's Counting, Chromebooks Are Either an Enormous Hit or Totally Irrelevant

I went to Intel’s Chrome OS event this morning, which filled its San Francisco venue to the brim with new devices running Google’s browser-centric operating system and packing powerful Intel chips–scads of new Chromebooks from major hardware makers, Chromebox mini-desktops and even an all-in-one “Chromebase” machine from LG. It was an impressive showing, and I came away lusting after some of the models I saw. (I like my own Chromebook, an 11-inch HP with a Samsung ARM-based processor, but it can be pretty pokey when I open too many tabs.)

As usual at a Chrome OS event, part of the goal was to make the point that Chrome devices are doing well. Figures got quoted: sales rankings and user star ratings at Amazon, and the fact that 10,000 schools have adopted Chromebooks. Certainly, the platform feels viable in a way it once did not. (When Gmail creator Paul Buchheit predicted Chrome OS’s imminent demise in December 2010, it sounded like a perfectly reasonable prognostication.)

Still, the more data points you consider, the harder it is to get a grip on whether Chrome OS is booming, filling a small-but-healthy niche or struggling to matter at all.

Chromebooks took 9.6 percent of U.S. commercial sales of computing devices from January-November 2013, up from almost nothing in 2012.

That’s according to NPD’s figures for the sales channels that target businesses, and it includes the iPad and other tablets as well as laptops and desktop PCs. For a computing platform that barely seemed to be going anywhere a year earlier, that’s a huge deal. And if you count only notebooks, Chromebooks have an even more impressive 21 percent market share. In all, NPD says that 1.76 million Chromebooks shipped through U.S. commercial channels in the first eleven months of the 2013.

Only 1 percent of PCs sold worldwide in 2013 were Chromebooks.

In this case the numbers are IDC’s. They’re for the whole planet, not just the U.S., and cover all sales channels, not just business-to-business ones.

IDC says that 2.5 million Chromebooks were sold worldwide in 2013. At first blush, that sounds like it might conceivably jibe with NPD’s figure of 1.76 million units sold in the first 11 months of the year. Except that NPD’s number was for sales to U.S. businesses, while IDC says that “virtually zero” Chromebooks went to enterprises (i.e. corporate customers) and that it’s consumers who are buying them. I can’t reconcile these viewpoints.

Six of the top 20 laptops on Amazon are Chromebooks.

…including two of the top three models. And the single best-selling desktop on Amazon is Asus’s Chromebox. These figures are as of the moment I write this–Amazon updates them hourly–but they always make Chrome OS machines look like hot sellers. Looking at them, I can understand why Microsoft is concerned enough about Chromebooks to helpfully advise people not to buy them.

As of January, Chrome devices accounted for only .2 percent of U.S. and Canada web traffic.

Chitika released that figure in February, and it covers September 2013 through January 2014. It represents a doubling of Chitika’s previous number, but it’s still so puny that you might as well round it down to zero. And in theory, the average Chrome OS user should be online more than a Windows PC or Mac user, since the whole idea is that Chromebooks provide an entirely web-based experience.

Disclaimer: Except for the Amazon rankings, all of these stats are at least a few months out of date, and they don’t include some of the data I’m most curious about. For instance, you can buy Chromebooks at Best Buy, Walmart and Target, but I haven’t seen any figures on how they’re doing at these major retailers. (For what it’s worth, I checked BestBuy.com’s laptop section, supposedly sorted with the best sellers up top, and the first Chromebook came in at number 23.)

It’s also possible that all the data points above connect into a coherent story: Chrome OS devices are selling well to U.S. businesses and Amazon customers but barely matter on a global scale, and aren’t yet being used by enough people to add up to meaningful web traffic.

If Chrome OS use is growing rapidly, and continues to do so, I’d expect the picture to be clearer in the months and years to come. But for now, all I know for sure is that both Chrome skeptics and Chrome boosters can point to stats that seem to back up their respective stances. Convenient, isn’t it? 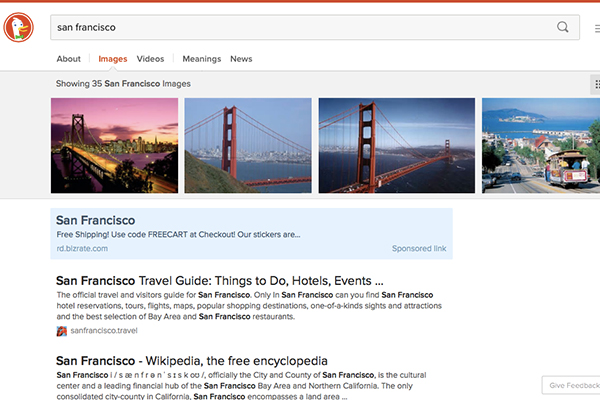 DuckDuckGo Previews a Powerful Google Alternative
Next Up: Editor's Pick