Dear Privileged-at-Princeton: You. Are. Privileged. And Meritocracy Is a Myth.

When I read The Princeton Tory cover story “Checking My Privilege: Character as the Basis of Privilege,” written by my classmate Tal Fortgang, I realized that I had just witnessed an attempt at checking privilege that was so unsuccessful it was borderline satirical. Fortgang, a fellow Princeton freshman, complained about the overuse and misuse of the phrase “check your privilege,” and asserted that the phrase was “toeing the line” of reverse racism. To prove this, he detailed his family’s history of persecution under the Holocaust, their journey to America and their ultimate rise to entrepreneurial success. He claims that the only privilege he has is that his ancestors made it to America, were hard-working and passed down wonderful values such as faith and education.

This so-called “privilege check” would have had a much better start had the author first Googled the meaning of privilege, because he holds a fundamental misconception about what it actually is. Privilege is not an idea aimed at muting opinion or understating the worth of accomplishments. It is not a stab at personal character, nor is it something for which one needs to apologize. But it is also not a myth. Privilege refers to the very real benefits that society affords certain groups over others, and it is manifested in many ways. This country has a history of overall preference for white males, and Fortgang even complains that people prompt him to feel “personally apologetic because white males seem to pull most of the strings in the world.”

While Fortgang is not responsible for white male dominance in society, he should at least recognize that this social hierarchy is not a mere coincidence, nor is it a testament to the power of hard work. Such a micro-level explanation, when applied to our country’s current state, would imply that white males have by and large outworked most women and minorities in the many fields in which they dominate.

The reality is as follows: White men are the only ones who have been afforded political and social rights since the founding of this country. In a sense, this constitutes a head start, or a privilege. Women and minorities, on the other hand, have had to fight for equal status. Moreover, that fight still rages today. Women earn only 77% of what men are paid, and it’s worse for women of color. There’s also unconscious bias, which undoubtedly affects behavior, but is more difficult to address due to its subtlety. For instance, a recent report from the University of Pennsylvania’s Wharton business school found that white males are more likely to receive a response from professors than minorities and women. If Fortgang can’t accept that his gender and race are beneficial to him, then he should at least concede that they are not a hindrance, which is more than can be said for women and minorities.

Fortgang’s privilege is evident in his erroneous assertion that America is “a country that grants equal protection under the law to its citizens, that cares not about religion or race, but the content of your character.” Such a statement fails to acknowledge that an equal protection clause in the law is not enough to effect equal treatment, nor does the law even promise that every violation will be properly handled. People of color know all too well what it means to be neglected and abused by the justice system, rather than protected by it. With racism becoming more covert, there is declining protection against it. The I, Too, Am Princeton Tumblr is a response by Fortgang’s own classmates who feel they are victims of mistreatment and micro-aggressions because of their race. Fortgang’s privilege is, in essence, the ability to not see these things as problematic because they do not affect him.

The real myth here is meritocracy. Fortgang’s major issue with being told to check his privilege is that it “diminish[es] everything I have personally accomplished, all the hard work I have done in my life, and for ascribing all the fruit I reap not to the seeds I sow but to some invisible patron saint of white maleness who places it out for me before I even arrive.” How about this: No one is saying Fortgang did not sow seeds, but checking his privilege is just acknowledging that the ground he tilled was more fertile than the ground others tilled. They could have spent the same amount of time in the hot sun, watering these seeds, but Fortgang might still reap better results because of certain advantages. For example, he says the way he values education is a privilege, and it might be. However, his African American counterpart in an underfunded, under-sourced school who values education just as much and works just as hard as Fortgang may not be afforded the same opportunities at the end of his high school career. Ultimately, success is when hard work meets opportunity.

Speaking of hard work, let me now address this touching story Fortgang presented about the hard work of his ancestors. For one, white privilege contributed to their ability to build a legacy for him. Standards for citizenship have been historically discriminatory, with U.S. naturalization originally limited to “free white persons.” Just because the “American Dream is attainable even for a penniless Jewish immigrant” doesn’t mean it’s equally attainable for all other groups in America. Additionally, Fortgang’s ancestors’ past struggle in no way negates the existence of his societal privilege today. He doesn’t have to fear racial profiling or employment discrimination. The closest thing to racism that he cites is someone calling him privileged.

Calling a white male “privileged” in a country with such a clear history and continuing pattern of preference for white males is about as wrong as calling a rich person “advantaged” in a capitalist society. The word privilege isn’t a negative judgment about Fortgang or his character, but simply a recognition that our society’s institutionalized racism and sexism isn’t aimed at white males. And for that Fortgang is privileged.

Is that clear? You. Are. Privileged. It is OK to admit that. You will not be struck down by lightning, I promise. You will not be forced to repent for your “patron saint of white maleness” or for accepting your state of whiteness and maleness.

Common sentiment on campus is a sincere desire that Fortgang open his eyes to reality, not only his own but that of the people around him. This lack of touch with reality was probably evident in the comments he made about welfare that prompted one of our classmates to suggest that he check his privilege in the first place. If he did, maybe then would he understand that there are people on welfare who work just as hard as he does but don’t have the same opportunities. Maybe if he were keen to the realities of racial profiling and discrepancies in convictions of homicides that shift depending on the race of the victims and defendants, he wouldn’t want to punch people angry over the Zimmerman verdict in their “idiot faces.” Fortgang’s understanding of so many issues and people would increase if he took the first step towards recognizing his own privilege. Even as a black woman, whose race and sex have posed unique and difficult challenges, I have done a privilege check. I am privileged to come from an upper middle class family, to belong to the religious majority and to have both my parents in the home. I acknowledge this because it allows me to empathize more with others and remain humble and grateful. Fortgang can do the same, and I highly recommend that he does. If he takes the time to really check his privilege, people will be able to tell, and maybe he won’t be instructed to do so again.

Briana Payton is a Princeton freshman studying sociology and pursuing certificates in African American Studies and American Studies. She is the project manager for Princeton’s Black Student Union, and serves on the university’s Black History Month Committee. She is from Detroit, Michigan. 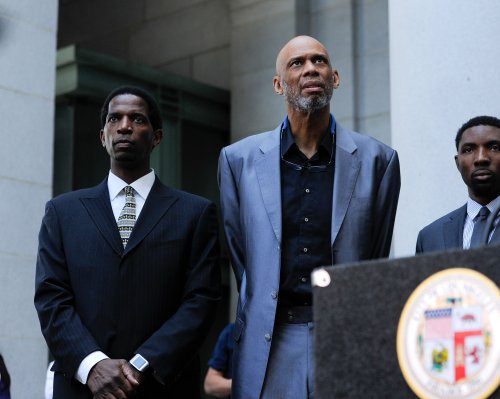 Abdul-Jabbar: Obama Election Was 'Milestone in a Marathon'
Next Up: Editor's Pick