As the sun rose over Kiev on Thursday morning, barricades of reinforced concrete appeared around the government quarter in Ukraine’s capital – stark monuments to the growing isolation of President Viktor Yanukovych and his dwindling circle of allies. The death toll in the revolution against him climbed to several dozen overnight, and as the bodies piled up on the sidewalks, hotel lobbies and makeshift clinics of the city, members of Yanukovych’s ruling Party of Regions began to abandon him in droves.

“No power is worth the cost of human lives,” Vladimir Makeyenko, the mayor of Kiev, said in a video appeal to his fellow party members and officers of the Ukrainian security forces. Earlier on Thursday, five members of parliament also renounced their ties to the President’s party, bringing the total to at least eight since this week’s wave of violence brought Ukraine to the edge of a civil war. The galloping defections, including widespread reports of police battalions laying down their arms in western Ukraine, severely limit Yanukovych’s options, as his isolation has left him prone to ill-advised and rash decisions. By eroding his already feeble majority in parliament, they also weaken his ability to resolve the crisis through legislative or constitutional reform.

The most senior defection, and one of the first, was that of the President’s chief of staff and ally of 15 years, Serhiy Liovochkin, who tendered his resignation in late November, just after the first crackdown of the uprising saw police in Kiev’s Independence Square severely beat dozens of students, who had been holding a peaceful all-night vigil for integration with the European Union. “These acts were the beginning of the current crisis in the country,” Liovochkin wrote in e-mailed remarks to TIME on Feb. 17, on the eve of the latest wave of deadly clashes in Kiev.

“I strongly oppose those who offer stability without freedom and without development,” he wrote, making a veiled jab at the hardliners surrounding Yanukovych. “He has many people around him that express opinions and offer advice, but at the end of the day he is the one who is making decisions and bears the responsibility for them,” Lyovochkin wrote in what appear to have been his first remarks to the media since his resignation. That diversity of views, he said earlier this week, should have urged the President to start “looking for a new balance and looking for the formula of appeasement.”

But hopes for a peaceful solution to the crisis through negotiations have now been squandered. Under intense economic and political pressure from Russia, Yanukovych has decided to crush the rebellion by force, sending his more liberal allies fleeing in the process. “The events unfolding in the capital of Ukraine today are a tragedy for the entire Ukrainian nation,” Makeyenko said in his appeal, adding that he would continue to serve as mayor despite abandoning the President’s political party. In effect, that meant joining the side of the oppostion. “I am ready to do everything possible to stop the fratricide and bloodshed on Independence Square.”

Within hours, he sought to undermine the government’s effort to choke off supplies to the revolutionaries. The subway system in Kiev, which was shut down on Tuesday to prevent reinforcements from joining the uprising, must be re-opened, the mayor said in a decree later in the day.

Meanwhile, members of the presidential staff continued to defect. The latest one on Thursday afternoon became Yuri Pavlenko, the President’s ombudsman for children’s rights, who wrote in an appeal on his Facebook page that he “categorically condemns the violence from the side of the special forces against peaceful demonstrators, young people, students and children.”

The most painful defections for Yanukovych, however, have come from among the ranks of Ukraine’s powerful oligarchs, the billionaires who have underwritten his political career for a decade. As the U.S. and Europe have moved to impose sanctions against the President’s allies, these titans of industry have released statements chastising the government for failing to pursue the course of dialogue rather than confrontation. “Of course, the voice of big business is important in any country,” Liovochkin, the President’s former chief of staff, wrote in his remarks to TIME on Monday. “Big business is interested in reforms, progress and rapid development of our country,” he said. “During the current crisis these motivations are paramount to all of the representatives of big business you mentioned.”

The current violence clearly does not serve those motivations, nor does it improve the chances of the oligarchs obtaining loans from western banks or doing business with western companies. So it is no surprise that they have been among the first to distance themselves from the President, as have the lawmakers they control in parliament.

But whether these defections serve the cause of stopping the bloodshed in Ukraine is an open question. On the one hand, they may pile pressure onto Yanukovych to come to the negotiating table; if he doesn’t he risks losing what is left of the financial and political support he has enjoyed for years from the country’s business elite. On the other hand, an autocrat left alone in his castle, barricaded and besieged, may be more likely to listen only to the few loyalists who still have his ear.

Increasingly, these are the men who have favored a sweeping crackdown, because they know that losing this struggle will not only mean the loss of their power and business interests. It could also mean having to answer before a court for the dead and wounded piling up on the streets of Ukraine. As evening approached in Kiev on Thursday, Interior Minister Vitali Zakharchenko, who controls the police forces being used to repress the revolt, warned that his officers have been armed with lethal weapons and have orders open fire on any “extremists” who continued to violate the truce called the previous night.

That does not bode well for attempts to stop the body count from climbing further. So while the members of the ruling party still have a chance, many of them are jumping ship. The others, however, are sealing themselves off with concrete barricades and surrounding themselves with armed and equally frightened troops. As the conflict escalates, they have less and less to lose. 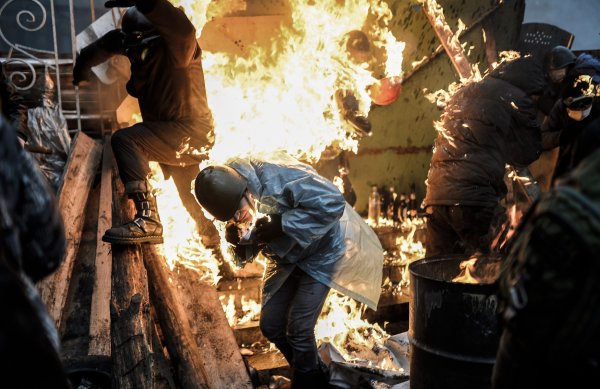 Battleground Kiev: 'Halfway Between a War and A Protest'
Next Up: Editor's Pick