Walk of Shame: A Movie That Might Just Offend Everyone

The first “walk of shame” I can remember happened my freshman year of college when I hurried across campus in the wee hours of a late October morning wearing a very pronounced bee costume. (Please note: Even though I got back to my dorm with my costume’s stinger hanging between my legs, I wasn’t ashamed.)

My latest walk was less of a stereotype, but it left me feeling far more disgraced. I was leaving a movie aptly titled Walk of Shame. I didn’t feel dirty because my theater emptied into sweaty Times Square (warning: If a movie is only playing in one theater in all of New York its opening weekend, it’s going to be bad), but rather because I spent 95 minutes of my life listening to unfunny jokes that relied on racial and slut shaming/sex worker bashing stereotypes and weren’t even that original or edgy. Even though the movie bombed, I had contributed to its paltry $38k opening weekend earnings.

The premise of the movie seemed harmless enough: “good girl” local news anchor Meghan Miles goes on a debaucherous night on the town with the ladiez after her fiance leaves her and her dream job with the national network is taken by another anchor. Cue the adorable bar tender/”writer of books” who provides her not only with lemon drops, but also the sweetest one night stand Hollywood could muster. Miles (played by the hilarious Elizabeth Banks) runs out on the cute bartender’s downtown LA loft in the middle of the night after she gets a message from her producer saying that she has another shot at the network gig if she gives a killer newscast the next morning. Unfortunately for Banks, her car was towed and her phone and purse are nowhere to be found. Thus begins a series of hijinx to get her to work on time.

Ok this never sounded like a masterpiece, but with a cast like Elizabeth Banks, James Marsden, Kevin Nealon, and Gillian Jacobs, it was bound to be a little funny, right? But this movie was just flat-out misogynistic and offensive to just about everyone.

The movie revolves around the fact that Banks must convince every single character she comes across that she, a “good girl,” isn’t a sex worker. Because what else could a woman in the inner city, wearing high heels and a “slutty” dress (but not really, I mean, it’s Marc Jacobs) be if not a prostitute? Banks is asked to provide everything from a lap dance to a boob flash to a happy ending to a song in exchange for help she never gets.Cops spew unsettling one-liners aimed at scaring the wayward “prostitute” which I think, as an audience, we’re meant to laugh at, yet accept as inevitable simply because she’s wearing a tight dress. What a misunderstanding! These repetitive jokes enter the dangerous territory of normalizing mistreatment of women based on her outfit.

The script also is full of sex worker bashing. There was a deluge of pejoratives ranging from “hooker” (said 9 times over the course of the film) to “hooker hoodlum” to “dumb hook;” “whore” to “crackhead whore;” “prostitute” to “deranged prostitute.” And let’s not forget “raggedy ass trip.” There’s even a scene on a bus in which an old woman literally yells “shame” at Banks for her outfit and inability to pay. Everyone cheers when the bus driver pepper sprays the supposed fallen woman after taunting her for being bad at her “job” if she doesn’t even have dollar bills to pay for a ticket.

And then there were the racial jokes, which began in the first five minutes of the film when a job interviewer asks Banks, a self-proclaimed voracious reader, if she liked Toni Morrison’s Beloved while obviously nodding at the one black man on the hiring team. But at least that racial stereotype of a character had a job that didn’t involve selling crack, which was the profession of practically every other man of color for the rest of the film. Banks winds up in a “ghetto crack den” as she puts it, with characters named Pookie, Scrilla, and Hulk. They prove to have hearts of gold because they give her career advice, threaten to hurt her ex-fiance, and give her a vial of crack as a gesture of good will. The sweetish scene is cut short by a shootout. Obviously. For diversity’s sake, the Mexican characters are crack dealers, too. Hasidic Jews are portrayed as repressed, sex starved, lechers who are so stingy they won’t give Banks a few dollars. And if you were an Asian actress in the film, chances are you worked in the Happy Ending massage parlor. (Banks pretends her name is Kim Jong Il and talks in a bad Asian accent when she pretends to be a masseuse while on the run from the cops. It’s complicated.)

On a positive note, Banks is never ashamed of or shamed for the act of having sex with Marsden (probably because he’s actually her future husband) and her friends are painted in a very supportive light. They even go to Marsden’s house to make sure he didn’t murder her. But even an empowering-ish closing speech about how Banks has embraced her matted hair and form-fitting dress, how she is done being a “good girl,” isn’t enough to save the film from its many offenses.

The movie was written and directed by Steve Brill who managed to get $15 million to produce this dud. Although Brill was responsible for The Mighty Ducks, he more recently dolled out box office bombs like Little Nicky, Mr. Deeds and Without a Paddle. Thanks Steve! 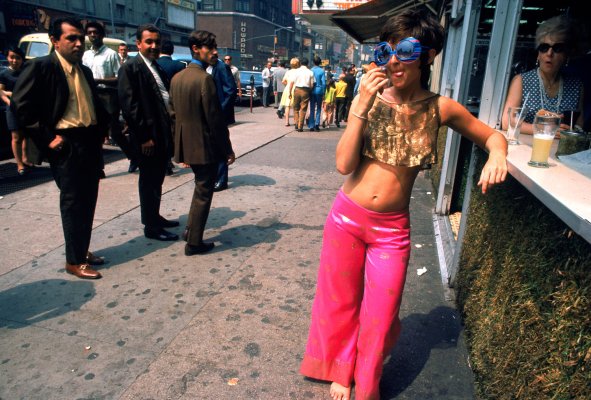 Sixties Fashion: Revisiting the 'New York Look' of 1969
Next Up: Editor's Pick