A century ago, the search for life in the Solar System was concentrated almost entirely on Mars, a place with polar caps, weather of some sort and, crucially, a location close enough to the Sun that liquid water might plausibly exist on its surface—an essential ingredient for biological activity. Mars is still in the picture—although more in terms of ancient than current life at the moment.

The newest excitement about alien life is instead focused in a place biology oughtn’t be—at least by the old thinking: in the frigid outer solar system. At those distant removes, where you’d think water would be rock solid, at least three moons—Jupiter’s Europa and Saturn’s Enceladus and Titan—are now known to harbor vast oceans of water miles beneath their surface, kept liquid by gravitational flexing that generates heat in the same way a wire hanger bent rapidly beck and forth will become too hot to touch.

Now comes a report in the journal Planetary and Space Science that adds Jupiter’s moon Ganymede to the list of worlds where life could be—and in this case, the ocean in question could be one of several, stacked one on top of the other and separated by layers of ice in forms that don’t exist on Earth. “We’ve had evidence for a long time that Ganymede has a subsurface ocean,” says lead author Steve Vance, of NASA’s Jet Propulsion Laboratory. When he and his colleagues looked at it carefully in a new modeling study, however, “things began to get weird.”

The weirdness comes from two factors. The first is that ice exists in no fewer than 15 different forms based on different crystalline structures. Most of them can exist only under a combination of high pressure and low temperature that doesn’t occur on Earth. It does in the oceans of Ganymede—the Solar System’s largest moon, which is bigger than the planet Mercury. And while regular old ice (“Ice I,” as chemists label it) floats on water, other forms sink. Scientists have believed for some time, in fact, that Ganymede’s surface is Ice I, while a denser, heavier form, Ice VI, coats the bottom of the sea, with water sandwiched in between.

A configuration like that would be bad news for biology, since scientists believe the interaction between water and rock may have provided the electrochemical energy that powered the earliest forms of life. “It’s like a sort of biochemical battery,” says JPL astrobiologist Kevin Hand, who wasn’t involved in this research. If solid ice kept water from reaching the rock, that battery couldn’t operate.

But earlier studies failed to factor in the likelihood that Ganymede’s ocean is very salty, a finding suggested by the moon’s magnetic field (salty water is a very good electrical conductor, turning the spinning moon into an electric dynamo). Salty water is also much denser than fresh, so when the moon’s internal heat melts the bottom layer of ice from below, that water doesn’t try to rise through cracks in the ice; it simply stays there. The biochemical battery can keep operating and—in theory, anyway—life might be able to eke out an existence.

The really weird part is that the interplay between salty water and ices with different crystal structures and different densities could continue upward, creating what Vance calls, in a reference that will be lost on anyone under 50, a “Dagwood sandwich” structure in Ganymede’s ocean, with alternating layers of water and ice.

Vance is quick to point out that these are modeling results, not actual observations. “These thing could occur,” he says. “We’re just laying the groundwork for what’s possible.” It will take a new mission to Jupiter to find out much more than that. The European Space Agency has one on the schedule for arrival in 2030, and NASA recently issued a call for proposals for a low-cost mission to study the subsurface ocean on Europa.

It will be a while, therefore, before we know much more about the prospects for life on these icy moons. But what we know already is making it clear that if life is as resourceful and adaptable as we think it is, it may be found in a lot more places in our own cosmic neighborhood than we ever realized. 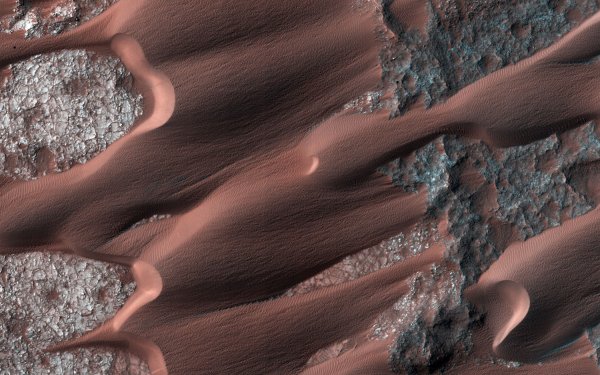 Window on Infinity: Selfies, Star Clusters and Hard Work on Mars
Next Up: Editor's Pick